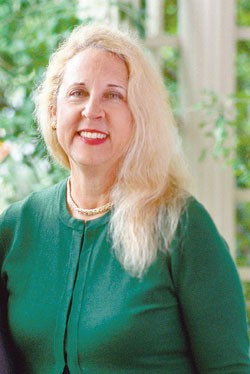 The to-do over what the Burlington Free Press recently called the “purported inappropriate relationship” between Rachel Kahn-Fogel, wife of University of Vermont President Dan Fogel, and university fundraiser Michael Schultz was about suspected ethical misconduct.

Ironically, the apparent absence of actual sex — and here I am referring to the stimulation of one person’s genitals or other body parts by another person — only increased popular and official misgivings about her.

As readers of Seven Days probably know, the liaison was discovered during the divorce of Schultz and his wife, Pauline Manning. Word got out about Kahn-Fogel’s attempts at university politicking and her frustration when they failed. Her most enraged emails exacerbated the impression that her actions were not only wrong but also ludicrous, if not insane.

What did she do? She expressed anger that she was losing her assistant. Mad! She tried to get Schultz assigned to gatherings at which she would be present. Underhanded! She wanted to be publicly thanked at events she organized. The nerve!

Dealing with Kahn-Fogel was no cakewalk, as Shay Totten reported in these pages. But these actions were hardly felonious, or even particularly unusual.

And then there was the sex, such as it was. It is no surprise that two people who work together might have an affair. Kahn-Fogel and Schultz’s relationship merited looking into, because of the potential conflicts of interest on both sides. But those 900 emails revealed little besides ordinary consultations between workplace friends about workplace matters. It was Kahn-Fogel’s operatic emotions of unrequited love that rendered her morally untrustworthy in others’ eyes.

To me, Kahn-Fogel’s is a classic case of what Betty Friedan called “The Problem that Has No Name.” Unpaid, unappreciated and unheard beyond pillow talk, relegated to arranging the seating at college functions, Kahn-Fogel was forever negotiating the territory between the flickering, reflected power of her husband — always conditional on her good behavior — and the depressing truth that she had no real influence to peddle.

In private emails to Schultz, she confided her rage at what she saw as the slights of others at UVM. But in her correspondence with university higher-ups, she groveled: “I understand that I have no legal rights to request staffing, but I thought you might be understanding...” It goes on.

On top of this, the emails show Kahn-Fogel to be the supplicant in her relationship with Schultz — whose part in the affair has vanished along with his side of the correspondence. In newsprint, both her rapture and her rejection look silly, icky. Wouldn’t yours?

The symptoms and sequels of “The Problem that Has No Name” are well documented in psychological literature, notably its prefeminist Freudian era: hysteria, depression, dishonesty, aggression, frigidity, nymphomania, delusions of grandeur and/or insignificance, suicide, homicide. Kahn-Fogel displayed some of the above.

In fact, Dan Fogel disclosed that his wife has long been in treatment for “serious mental health issues.” He is, on the one hand, pleading for compassion. But he also is implying that he has nothing to do with her marital dissatisfaction, and that her (or anyone’s?) desire for extramarital love and sex is a symptom of pathology. Craziness can exonerate you. It also eliminates other people’s obligation to take you seriously.

Kahn-Fogel is responsible for her actions. But her plight is also political: This is what the feminine role — structural humiliation — does to a person.

Investigators are investigating. So far, they’ve found no abuses of privilege on Kahn-Fogel’s part. Schultz’s dissertation on the unsung contributions of university presidential spouses has been declared innocent. Kahn-Fogel may have been the muse for the paper, but she is not named in it. And if she had been? Has no doctoral candidate ever used his friends as subjects?

The story broke May 24. Kahn-Fogel was “relieved of her duties.” The university placed Schultz on “administrative leave” — meaning he gets paid until he finds another job.

Schultz may have a harder time finding employment as a result of the scandal. But his sanity will not be questioned. Kahn-Fogel will be remembered as a figure of ridicule.

Hell hath no fury like a woman scorned. How often is that fury justified?