A Winooski Cocktail Crawl for the Coronavirus Era

Back in May, Seven Days reported that Vermonters appeared to be drinking more booze than normal while staying home during the coronavirus pandemic. According to data from the state Department of Liquor and Lottery, distilled spirits sales at retail outlets were up nearly 16 percent in April from the year before. Based on my own personal consumption, that increase seems to have held steady.

Rather than stocking my bunker with handles from big national booze brands, though, I've been leaning in on the relaxed laws about taking cocktails to-go.

In a directive issued on March 19, Gov. Phil Scott permitted takeout and delivery of alcoholic beverages from restaurants and bars during the state of emergency declared in response to COVID-19.

More than 30 states and Washington, D.C., have enacted similar measures, according to the Distilled Spirits Council of the United States. Several states — including Iowa and Michigan — are now extending the fun beyond state-of-emergency measures, some permanently.

Vermont's takeout cocktail directive is still tied to the state-of-emergency declaration, which is currently extended through August 15. The governor's office told Seven Days in an email that the directive would likely continue to be tied to the state of emergency if it's extended again "to help bars and restaurants still impacted by restrictions and closures." However, the administration is currently "focused on the emergency response" and is not working on a long-term or permanent extension of the directive.

For the time being, allowing these sales to happen has been "an important component for a lot of restaurants," said Amy Spear, vice president of tourism for the Vermont Chamber of Commerce. "Alcohol to-go has been, and continues to be, a helpful lifeline," Spear said.

As I was cleaning out my cupboards this week, I found a remnant of a mid-quarantine takeout cocktail purchase: an uneaten Cup Noodles, the instant ramen, from the Monkey House in Winooski. Part of the directive allowing booze to-go specifies that drinks must be purchased with a meal. When the bar reopened in late May, its approach to satisfying that requirement caught my attention.

The Styrofoam-packed noodles (and a hot dog roller) allowed the Monkey House — which doesn't have a kitchen — to meet the state Division of Liquor Control's definition of a "meal."

"We didn't have enough food for the DLC, so we needed to think creatively," general manager Ali Nagle told me at the time. I bought the noodles, put my to-go cup of maple-whiskey lemonade in the cup holder of my car — the one in the back seat, to be safe — and went home to enjoy the drink in my backyard.

Finding that Cup Noodles months later made me curious about how other restaurants and bars in Winooski are dealing with this new world of portable potables. What drinks are they selling? How are they packaged? Is every bar selling instant ramen?

With those questions in mind, I enlisted two friends for a socially distant cocktail crawl around the Winooski traffic circle.

One of the joys of an old-fashioned, pre-COVID bar crawl was its spontaneity. Preordering my drinks online the night before our plans threw that straight out the window. How was I supposed to decide what we'd want to drink the next night?

As I scrolled through Misery Loves Co.'s "Digital Delicatessen," my worries faded. The descriptions of frozen piña coladas and strawberry-shiso margaritas — not to mention the Sangrita Kit, "best when shared with someone you love in a beautiful spot" — were my virtual bartender, gaining my trust and whetting my thirst.

I placed an order for the Sangrita Kit, fully charmed by the tiny bottles of tequila and chile-lime Tajín seasoning, and eager to chase it all with the spicy, tomatoey sangrita, or "little blood." Not stopping there, I also ordered the Face Plant cocktail — a sour-cherry shrub mixed with an herby gin described as a "refreshing, earthy and perfectly balanced face-plant into the garden." Sold. Everything-spice flax crackers and hummus filled the cart. 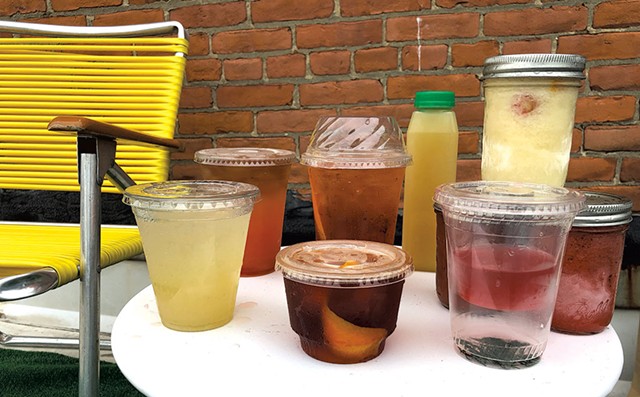 Next, I placed a preorder at the Winooski outpost of El Cortijo: two salsas de casa and a "caliente marg for two."

Hoping to preserve a bit of the serendipity of a bar crawl, that's where my premeditated purchases stopped. Several spots in Winooski take walk-up orders and last-minute online orders, so we'd take our chances.

The next day I met my friends at the top of the circle, stopping at El Cortijo at my scheduled 4:15 pickup time. Two paper bags awaited me inside on the bar — tortilla chips, containers of salsa roja and salsa taquera, and a sealed juice bottle filled with the spicy margarita.

One of my friends, also a former Brooklyn resident, immediately remarked that the cocktail packaging "looked like a Nutcracker" — a ubiquitous, usually illicit, high-proof staple of New York City summers.

We wandered down the circle to our next stop, following the well-explained instructions posted outside of Misery Loves Co. for curbside pickup. Logan Bouchard quickly packed up our order in the restaurant's reimagined dining room; a staging area was set up where diners once sat. He showed us the dill garnish for the Face Plant — cleverly placed in the bottom of two stacked cups — warned us to be gentle carrying the flax crackers and sent us on our way.

I quickly placed an online order at Waterworks Food + Drink for a classic Bee's Knees cocktail and marinated olives, and we headed to Mule Bar while we waited for them to be ready.

Mule Bar allows walk-in ordering, one customer at a time. Bright-orange tape on the floor directed me to order at the bar, where a decorated Plexiglas shield reminded me to "please speak up so we can hear you." I shouted an order for a Negroni and an Americano, showed my ID (lowering my mask when asked, to verify my identity), and signed the receipt with a pen from the "clean pens" cup. The bartender slid the drinks under the shield, the Negroni fitting easily in a small ice-cream-sundae-style cup and the Americano getting a little stuck in its taller packaging. "We're making it work," the bartender said.

Quickly out the door, we walked to Mandarin. I've been eating a lot of Mandarin's sesame chicken during quarantine but had yet to try one of their Scorpion Bowls to-go. Unfortunately, when we tried to order at the window, the employee taking our order explained that the bartender wasn't working that night. With all of the cocktails already in our hands, that was probably for the best.

We walked under the bridge to Waterworks, where a swanky velvet rope separated the pickup line from the check-in spot for on-site diners. I'd ordered the cocktail with ice — the restaurant offers drinks with or without — and quickly realized my mistake. It's not the Wild West (or New Orleans), and we weren't going to drink the cocktail as we walked, so it was sufficiently watered down by the time we made it home. To-go cocktail tip: Skip the rocks.

Our final stop was back at the top of the circle at McKee's Pub & Grill. The pub's patio was bustling with diners and drinkers, but we walked up to the takeout window and placed an order for rum punch and sweet potato fries. Something about that random combination — and about ending the crawl at McKee's, even though we hadn't had a sip of any of the drinks yet — felt just right.

Arms full, we headed to my friend's roof and surveyed our wares. I was impressed by the array of packaging: tiny mason jars, plastic and compostable cups of all sizes and lid shapes, and the Nutcracker-style bottle.

We put out our spread and split the drinks into vintage glassware from our host's extensive collection. The bars and restaurants had done all the work to carefully craft these drinks to-go; dressing them up felt like the least we could do.