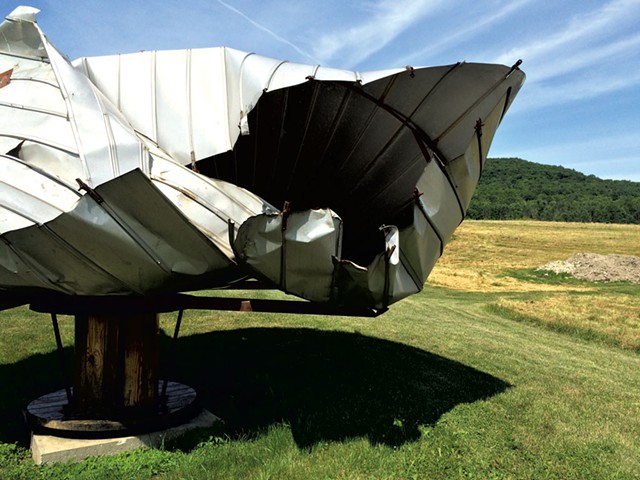 Hanging near the back door of Edward "Ted" Cornell's blindingly white house in Westport, N.Y., is what looks like a flat, heavy flower made of rusting iron. In its former life, it was a freight-train wheel brake. Cornell worked briefly as a freight brakeman for the railroad in the 1970s. It was among the occupations that have accompanied his life as an artist: He was an associate of renowned producer Joseph Papp at the New York Shakespeare Festival; a cab driver; a Wall Street bondsman. Among the distinctions of his theatrical career are directing the first off-Broadway play to win a Pulitzer Prize, No Place to Be Somebody; and winning an Obie Award for Johnny on a Spot.

Now, at age 72, Cornell is mastermind of the Art Farm at Crooked Brook Studios. The rambling sculpture environment, not 10 miles south of the Essex ferry dock, is home to 30-some works. They range from a Dadaist readymade 1930s McCormick-Deering reaper-binder to the Andy Goldsworthy-esque "Stone Cones" to otherworldly mishmashes of defunct farm equipment and detritus. Most have professional, weather-resistant exhibition labels.

From Sayre Road, the Art Farm is most visible for what Cornell refers to as the "whale." The magnificent concoction of twisted metal is officially titled "The Phoenix of Wadhams," or (Cornell gave it two titles) "Rotating Installation of a Minimally Processed Found Object." That object is neighbor Dave Sayre's silo dome, set atop a wooden electrical spool anchored to the ground by a concrete foundation. The kinetic sculpture spins by way of wind or human hand. Its angles are captivating, and, from the right vantage point, it does look like a whale breaching.

"It's all my own damn fault," Cornell said during a recent visit. The artist was raised in Massachusetts and spent most of his adulthood in Manhattan and Brooklyn. Disillusionment with the city spurred him to "get out and live this life" in what he called "the back of the beyond." As Cornell put it, "The game [was] to make a place to live, a refuge." With the help of an inheritance, the artist purchased his 1910 farmhouse and 42 acres in 1989.

Cornell did not immediately set to work on his sculptures. His first order of business was to arrange his painting studio, a modest but open three-story ladder-and-platforms affair. In 1996, Cornell had a solo exhibition of his abstract and realist landscapes at the nearby Atea Ring Gallery, where he showed what he described as "a dozen or more good, hard paintings." He was represented there until 2001. In 2009, the Adirondack History Center Museum in Elizabethtown mounted a retrospective of Cornell's paintings titled "Inside the Landscape."

"The Phoenix of Wadhams," erected in 2000, was the farm's first installation — if you don't count the 1995 pond, which also has an exhibition label. In 2005, during the Adirondack Harvest Festival, Cornell's park was designated as an "Art Farm" — and the name stuck. Last fall, the local land trust Champlain Area Trails added the 1.5-mile Art Farm Trail to its recreational roster, an inclusion that continues to delight Cornell.

"I never had a particular outcome in mind," he said of his sculpture park. "I'd like to make these big things out of junk. That was the extent of my insight." The result is an open-air gallery heaped with the exoskeletons of his philosophical musings and works that convey what Cornell called "smart-ass understatement."

Closest to the farmhouse is "Mortgage Crisis," in which a broken hot tub is attached to a torn satellite dish. "It looks like it was in disgust destroyed," Cornell noted.

This is not far from the truth. Cornell purchased the hot tub and installed it indoors shortly after moving in, he recalled, thinking, "This is going to be how my life is." But the tub's odor and need for constant upkeep prevented the luxury he had envisioned from materializing. So Cornell's son Noah helped build a scaffolding to hold half the sawed-apart tub on top of the backyard dish. Functioning remnants of the tub's original plumbing are connected to a garden hose: Turning the tub on causes water to trickle out and down its sloped walls. "A weeping fountain," Cornell has dubbed it.

In a 2015 article in Plattsburgh's Press-Republican, Cornell wrote, "Junk has memory and junk suggests possibilities ... I love it because it talks to us about our common origins, how we all come from a long line of junk. Our very sun is a junk star, made of the debris of earlier stars." In that light, Cornell's junk-derived sculptures might be seen as both offering and shrapnel from an exploded cosmic entity.

Cosmos and chaos are recurring themes for Cornell. From the sliding doors of his barn-gallery, a visitor can gaze at "It SO Happens." An axle, a suspended ladder and other objects surround a tower of metal topped by a single light bulb — switched on from the barn. The piece, Cornell explained, resulted from his grappling with quantum logic, nonlinear reasoning and the creation of matter.

Inside the barn, a wall-hung assemblage called "The Wild Ride" displays a dilapidated cart, a wasp nest and a Ping-Pong-ball "satellite" against a backdrop of purple-and-gold-painted tarp and wire mesh. According to the label, the 2007 work depicts "America's trip from the Great Depression to outer space."

"Chariot," on the lawn, is three machines welded together, with a single stalk of metal protruding into the sky. It represents the ill-fated Challenger shuttle launch, said Cornell. His work frequently employs such single, ikebana-like protrusions, as well as strategically placed gilding.

In conversation, Cornell only grazed the surface of the political perspectives that underlie much of his work and life. Still, a strong activist streak emerged. In the early '70s, Cornell coordinated the television production of the David Rabe play Sticks and Bones, about a blind Vietnam veteran. President Richard Nixon hated the play, he noted, and it ruffled feathers at the hosting network, CBS. Also in the 1970s, Cornell cofounded a tenants' group that eventually gained control of the Brooklyn waterfront building in which his two sons live to this day.

Cornell's more recent work in art and theater likewise speaks to his politics. "Big Brother (is watching you)" deploys a mounted iron box, once used by farmers to hold seed, to conjure the panoptic horror of George Orwell's dystopian 1984. 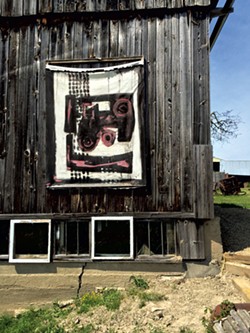 In 2007, at the United Church of Christ in Elizabethtown, Cornell staged a one-night-only production of My Name Is Rachel Corrie, a play about the 23-year-old American peace activist killed in 2003 by the Israel Defense Forces. Cornell also honored Corrie with his "tribute" painting "Kaddish for Rachel Corrie," an abstract oil that hangs from the barn wall.

Cornell said he hopes the Art Farm will continue to attract visitors after he's gone. Currently, he wrote in an email, he is "investigating the formation of a foundation promoting further public use of the farm." In the meantime, he's frequently available to talk to those who stumble on his park. Anyone planning a trip should allow plenty of time to noodle through the mowed paths, catching installation vignettes from multiple viewpoints.

Though the Art Farm is an agglomeration of dozens of individual artworks, Cornell encourages visitors to take a holistic perspective and see the entire environment as a cohesive unit. "The place itself, as a whole, has an effect," he said. "It is a work."

The original print version of this article was headlined "Art Farmer"