Shirley Landry didn't mince words when asked to describe what it was like to live under COVID-19 restrictions for more than a year.

During the pandemic, Landry left her apartment above the senior center only when one of her children took her for a drive or to a doctor's appointment in Barre. Her kids got her an iPad and taught her how to use FaceTime so she could have virtual visits with her family. She did lots of puzzles. Still, "it was bad," she said of the isolation.

Recently, Landry has found some relief. In early July, the senior center, where she was a regular before the pandemic, reopened three days a week for in-person meals and socializing.

As Landry contemplated a square of carrot cake with thick white icing, she recalled the first day she returned to the center. It was "wonderful" to be with friends again, she said.

"I was talking to the walls," Landry said. "It's just great to get back."

But just as seniors are beginning to return to some semblance of normalcy, COVID-19 cases in Vermont are creeping up again, and troublesome news about the virus is emerging. On Saturday, the state reported 70 new coronavirus cases, the highest one-day total since early May. And earlier last week, the Centers for Disease Control and Prevention recommended indoor masking, regardless of vaccination status, in areas of the country with substantial or high COVID-19 transmission.

There is also news of breakthrough cases of the virus in fully vaccinated people, and emerging data show that vaccinated people can spread the now-dominant Delta variant of COVID-19. Debates are under way about whether people need booster shots six to 12 months after receiving the initial jab because of waning efficacy.

But for now, Vermont — with the highest vaccination rates in the country and relatively low levels of COVID-19 transmission — feels safe enough for seniors at the Waterbury center.

"I don't think everyone's quite ready for this yet." Arlis Fuglie tweet this

Landry was one of about 20 people who showed up for meatloaf and mashed potatoes on July 28, a Wednesday, which is known around the center as the "premiere" lunch day because of its heartier offerings. During the meal, seniors chatted about new haircuts and exercise routines, did crossword puzzles and sang a rousing rendition of "Happy Birthday" to the center's cook, Donna Barr.

Until March 2020, the center was open Monday through Friday and it wasn't unusual for up to 50 people to share the Wednesday lunch, center director Vicki Brooker said. The facility is taking its reopening cautiously, even though more than 95 percent of senior citizens in Vermont have received at least their first COVID-19 vaccination. Brooker is reopening the center slowly, in part because she doesn't want seniors — who have had the highest hospitalization and death rates from COVID-19 — to have unrealistic expectations that everything is full steam ahead.

A sign on the center's door says visitors who are not fully vaccinated must wear a mask and follow social distancing rules. Brooker said she abides by the honor system and hasn't yet asked seniors for proof of vaccination.

Saying they were concerned about the mental and physical effects of social isolation on older adults, state officials announced in April that senior centers could reopen with virus mitigation measures in place. But Justin Blackman, the Waterbury center's board chair, said the seniors he talked to then told him that they didn't want to return if they had to wear masks or eat at opposite ends of the table from their friends. The center's leadership also wanted to make sure all staff members and volunteers were vaccinated before reopening.

So they took their time, putting a fresh coat of paint on the walls and recruiting additional volunteers, until the state reached its 80 percent vaccination goal and Gov. Phil Scott lifted all COVID-19 restrictions in June.

Now, the vast majority of the approximately 40 senior centers in the state are open. Half of them are back to their pre-pandemic programming, according to Conor O'Dea, director of the Department of Disabilities, Aging and Independent Living's unit on aging. The other half have ramped up slowly due to factors such as staffing issues, fewer seniors interested in participating and a shift to more online programming.

O'Dea said COVID-19's Delta variant is on the radar of senior center directors he's talked to, and that they'll look to the state health department for guidance on how to cope with the new threat. 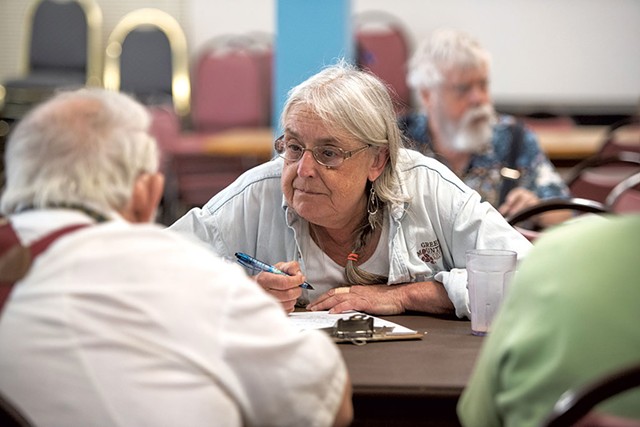 In the first week of July, the Waterbury center invited just 10 of the "regulars" for lunch, as well as a handful of other guests, to make sure that the staff, volunteers and board members could pull off an in-person meal.

"It went swimmingly," said Brooker. Every week since, a few more people have returned.

Last week, Arlis Fuglie was one of the seniors enjoying lunch with friends. She surveyed the room and remarked that the mealtime crowd used to be larger.

"I don't think everyone's quite ready for this yet," Fuglie said. "It's really hard getting used to being out there after that long of not." She recalled a recent interaction with a friend in a parking lot. She gave the person a hug and then thought, "Oh my God, what have I done?" before realizing that it was OK.

Bev Wells, who sat next to Fuglie and stayed after lunch to play dominoes, said she was excited when she found out the center was reopening. She and her two sisters constituted a pod while the "Stay Home, Stay Safe" order was in place, but she found it boring and depressing to be cooped up in her apartment, unable to see her grandkids.

"I thought the virus made us very lazy," Wells said. "You just sat so much that when you could get out, like, 'Do I have the energy?' ... I tried most days to get dressed because we would at least go into the puzzle room in our building."

On her first day back, Wells said she took stock of people she hadn't seen in more than a year: "How much they aged, who lost weight, who gained weight, who survived."

Wells said she feels lucky to be weathering the pandemic in Vermont, though she's starting to get concerned about the Delta variant and rising case counts.

"I don't want to be stuck in the house again," Wells said. "But I did wear my mask in Shaw's yesterday. I wasn't taking any chances. We get a lot of out-of-staters here, so I just wanted to be safe."

Wells said she does feel safe interacting, maskless, with fellow seniors, since the vaccination rate is so high among her age group.

Those who work with seniors say the strategies and new programs developed during the pandemic will serve older people well going forward, especially if the state has to put COVID-19 restrictions in place again.

Pre-pandemic, for example, the Central Vermont Council on Aging offered exercise classes that didn't seem suited to being done online, according to Kathy Paquet, the council's wellness director. But the agency helped instructors adapt them, and they're now accessible to more people than ever.

The council also provided art kits to 135 central Vermont seniors last fall and winter. Each participant was paired with a volunteer who could walk them through the project and chat with them by phone or video. The agency is planning to expand the program this year.

Luke Rackers, the council's communications director, said the pandemic provided an incentive to help overcome barriers — including affordability and lack of tech know-how — that keep seniors from using computers and navigating the internet. The council teamed with Williston-based nonprofit Technology for Tomorrow to provide over-the-phone training that taught 20 seniors how to access Zoom.

"There's still a lot of people out there who may say things like, 'I don't like computers,'" he said, "but when they find out that 'Oh, I can video conference with my niece in Texas from Vermont,' a light bulb goes off and there's a whole new goal for them to work towards."

Still, there's nothing quite like being together again in person, said Brooker, who came out of retirement in June 2020 to lead the center after volunteering there for a few years. She and board chair Blackman, the resident tech expert, are planning to bring back Sunday movie night in August. They'll start with the 1936 musical Show Boat, projected on the center's wall.

But they've also stocked the kitchen's freezer with enough frozen meals to provide seniors with a couple of days of food if the center were to close abruptly, said Blackman.

That kind of precaution wasn't something they ever thought about before the pandemic.

"But now we know on a deep level that that could happen. It's not theoretical anymore," said Brooker. "It's like, next month you might be shut down and have hungry seniors. And so that's in our DNA now. So that's why we talk about it now and think about it. It's very real."

The original print version of this article was headlined "Soft Opening"