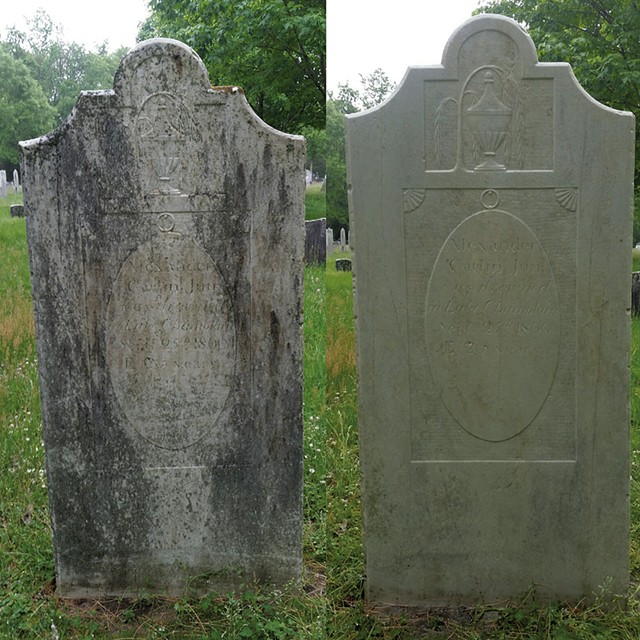 A group of volunteers is cleaning up a Burlington cemetery to benefit the living.

Jason Stuffle heads up the headstone cleanup crew in Greenmount Cemetery, a 15-acre space tucked into a section of the city along Colchester Avenue that residents have taken to calling the Old East End neighborhood.

Stuffle has lived across from the graveyard, the city's oldest, for the last 15 years. The neighborhood association had planned to clean up the green space in April but had to cancel. With increased use during the pandemic, the task took on a new urgency, and the group got together last month.

"We've been trying to make it real nice for people that are coming to visit to be able to appreciate it and learn some history," Stuffle said.

While the aptly named Lakeview Cemetery on the Burlington waterfront gets the most ink, Stuffle said Greenmount has plenty to offer for history buffs and those in search of solitude. The space was set aside as a cemetery in 1763, the year Burlington was chartered, and is the final resting place of Revolutionary War hero Ethan Allen and some of his relatives; the Catlin brothers, who helped found the mills on the Winooski River; the philanthropist Mary Fletcher; and famed Vermont architect Frank Lyman Austin, who designed Burlington's Memorial Auditorium and other historic buildings.

Stuffle, a research engineer for IBM, decided that cleaning the headstones would be one way to brighten up the place — and, given that the oldest one he's found dates back to 1783, they're in need of it. Armed with soft-bristle brushes and some water, Stuffle and the other volunteers have taken to scrubbing the tombstones, wiping away years of air pollution, dirt and lichen.

To date, the team has cleaned about 55 headstones, and there are plenty yet to do.

"Cemeteries used to be a place to go to have a social gathering, and people these days kind of view cemeteries as places you don't go," Stuffle said. But, he added, "This really is an amazing asset to the city."

The original print version of this article was headlined "Tidy Tombstone"