A Vet Recalls His Cold War Service in St. Albans 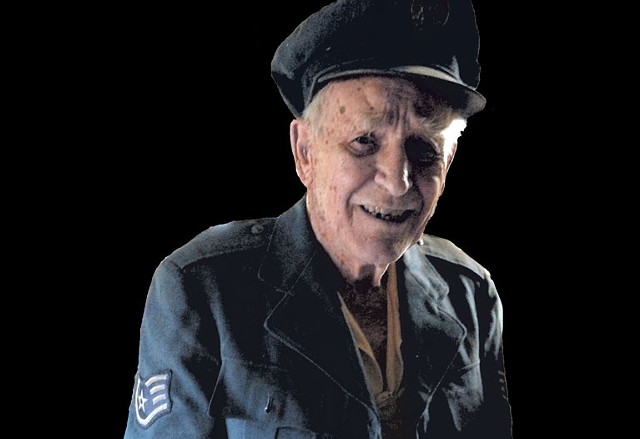 The May 10 WTF column answered the question: What's that white dome on a hill overlooking St. Albans? Contrary to popular misconceptions, the massive golf-ball-shaped structure atop Bellevue Hill just east of Interstate 89 isn't a Doppler weather station, a space observatory or an IMAX theater.

Rather, it's a radar dome, or radome, one of hundreds built across the United States in the 1950s as part of the U.S. military's early-warning system to defend against an air invasion by the Soviet Union. The St. Albans one, decommissioned in June 1979, now serves as secondary radar for air traffic controllers at Burlington International Airport.

After that story was published, Seven Days received a phone call from John Prushko, an 87-year-old retiree living in Grand Isle. Prushko said he was the NCOIC, or noncommissioned officer in charge, of the Saint Albans Air Force Station radomes from 1950 to '52. His firsthand account of his service there is an interesting addition to the story behind Vermont's most visible Cold War-era relic.

Prushko was born on October 2, 1929, and raised in central Pennsylvania. After graduating from high school in 1947, he worked briefly in a nearby coal mine before enlisting in the U.S. Army Air Forces — the U.S. Air Force didn't become a separate military branch until September '47 — and was sent through basic training.

Prushko, who wears a hearing aid, lost much of his hearing in a boot camp training accident. He doesn't remember much about the incident except: "I woke up with two other guys, leaning against a steel building, just as sick as a dog." Prushko later learned that he'd been exposed to phosgene, a nerve gas used extensively during World War II. He spent six months in military hospitals before reporting for duty in St. Albans on January 1, 1950.

Prushko said St. Albans had only three radomes, not five, as Seven Days initially reported based on records from the Saint Albans Museum. He also asserted that the radomes were operational by the spring of 1950, not '51, as we reported. As he put it, "I doubt I sat there for a year doing nothing."

The St. Albans Air Force facility, he explained, was divided into two parts: a lower perimeter, where most of the military and civilian personnel worked; and an upper perimeter at the top of the hill, where access was restricted to a handful of airmen like him with higher security clearances.

"That was my domain," Prushko said. "I was king of the hill."

Despite the seriousness of his assignment, Prushko said the work was stressful only when a "bogie," or unidentified aircraft, appeared on radar screens. He explained that the base used the U.S. IFF or "identification, friend or foe" system to determine whether planes were friendly or hostile and to plot their position and bearing. If a bogie refused to identify itself or kept its IFF system switched off, it was considered a "bandit," and Prushko would scramble fighter jets from Burlington, Bangor, Maine, or Buffalo, N.Y., to intercept it.

Prushko described how Gen. Curtis Lemay, then-commander of Strategic Air Command in Nebraska, would test the readiness of his radar crews by flying U.S. bombers into their airspace from across the North Pole or the north Atlantic. Knowing that Lemay preferred to conduct such unannounced tests during holidays and in inclement weather, Prushko, as NCOIC, often slept in the radar room at such times to be present and immediately ready to react. (Radar was monitored 24-7.)

In his two years stationed at St. Albans, Prushko said he never once picked up a Soviet bomber on the screens, though he did have one "scare." One day, a blip on the scopes looked to be going 7,000 mph. (Intercontinental ballistic missiles capable of such speeds were not yet in use.) Prushko said staff had a red phone on-site that they could use anytime, day or night, to call the Pentagon. Only the military officer on the other end could issue the order to shoot down enemy aircraft.

On the day of the unidentified blip, one of Prushko's airmen reached for the red phone, but Prushko slapped his hand away. About a week earlier, he had been briefed about a new top-secret radar site that was due to go live in northern Canada. Prushko called the commander at that facility and asked him to change his radar frequency, whereupon the blip immediately disappeared from their scope.

Prushko's accounts couldn't be independently confirmed. His name doesn't appear in an unofficial personnel roster archived at the Saint Albans Museum nor in an online roster maintained by the National Air Defense Radar Museum. Moreover, his service records appear to be among those of 16 to 18 million other U.S. Army and Air Force veterans whose personnel files were destroyed in a 1973 fire at the National Personnel Records Center in St. Louis, Mo. An NPRC spokesperson said that Prushko's military service could be checked through a Freedom of Information Act request, but it'd likely take weeks, if not months, to get a reply.

Nevertheless, Prushko's intimate knowledge of the St. Albans radome and its operations lent credibility to his story. And, though he couldn't find his photos of his time in St. Albans, Prushko dug out his old Air Force uniform, which he's kept in a boathouse beside his lakefront home. Based on its decrepit condition, the uniform appeared to have doubled as a bird's nest.

Prushko didn't stay in touch with any fellow Air Force vets from St. Albans but spoke fondly of his time there.

"It seems strange that they'd take a 20-year-old kid and give him responsibilities like that. At the time, I paid no attention to it whatsoever. I just did the job and had fun," he said. "Years later ... it still gives me shivers going down my back thinking of the responsibilities I had."

The original print version of this article was headlined "Follow-Up on the White Dome Overlooking St. Albans"