As an advocate, Julie Gagnon Prior has had to give a lot of hugs. She didn't hug much before she got sick, she said, but now hugs are her greeting of choice — fierce, warm squeezes that she administers with all her might.

That might be the first thing you notice when you meet Prior, 50. The second is that she has a tremendous laugh. And then maybe, if you spend a few hours with her, you'll see the signs of her disease: the inconspicuous symptoms of Lyme that sometimes appear when she talks or smiles.

All the same qualities Prior demonstrates in person show up in her 2020 Vermont Pinup Girl Calendar — her disease, but also her energy and her humor.

Each month features a different photo of Prior, who grew up in Jericho and Essex Center and now lives in Grand Isle, looking strong and sexy and very Vermonty. In one photo, she lounges suggestively on a junked red van wearing an oversize sweatshirt and dirt-stained jeans. In another, she poses coyly on a boat in a bright-yellow rain jacket and black boots.

Prior didn't pursue the calendar project because she's looking to land a spread in Vogue. When it's just about her, she said, she prefers not to attract attention at all.

But she wanted to turn a spotlight on a cause near and dear to her: Vermont Lyme, a nonprofit that works to prevent tick-borne illnesses and support those affected. One hundred percent of the proceeds from each $10 calendar will go to the organization. Prior hopes to raise $20,000 through sales by year's end; she's already collected more than $3,000.

Though Vermont has the second highest incidence of Lyme in the U.S., the disease often flies under the radar. That's partly because of the debate surrounding a diagnosis of "chronic Lyme disease"; according to the Centers for Disease Control and Prevention, "experts do not support its use." (The CDC prefers the term "post-treatment Lyme disease syndrome" and says the cause of the symptoms is "not known.") Advocates like Prior, however, believe that sufferers too frequently go undiagnosed.

"So much is hush-hush," Prior said. "And there's no cure. No remission."

The calendar is lighthearted, but its first and last pages provide protocol for avoiding tick-borne illnesses and outline Prior's own health experiences. She's been living with a severe case of chronic Lyme disease for more than a decade, since she was bitten by a tick and then misdiagnosed in 2008, she said. The postponement of treatment only made it worse.

"Once you're as far as I am, there's nothing at this point that can help me," Prior said. 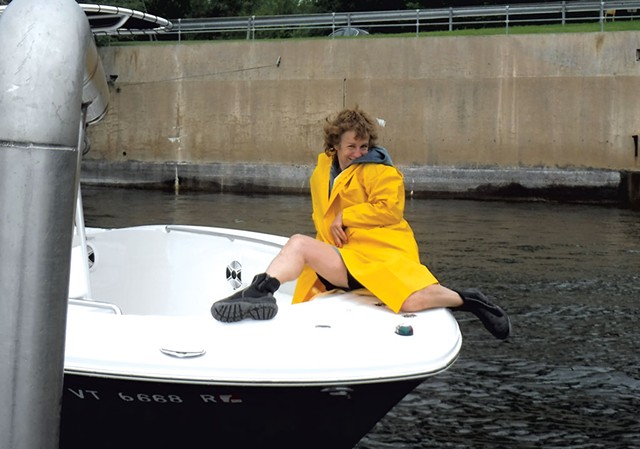 Now, her list of symptoms ranges from Bell's palsy, which weakens the muscles in half of the face, to full-body small-fiber neuropathy, which keeps her from reacting properly to burns and other stimuli. Prior is in pain most of the time and needs to lie down every few hours; she carries blankets and a pillow with her everywhere, just in case. This summer, she said, she'll schedule a surgery that will burn and deaden her occipital nerve, with the goal of relieving the constant headaches that she said feel like knives in her skull.

The disease has also put a hard stop to Prior's lifelong pursuit of adrenaline. Though she's earnest and solemn when describing her disease, her face lights up when she talks about her adventures. And that's another side of herself that Prior displays in the calendar.

"I've always been an outdoor extreme athlete, pushing everything to the limit, crazy," she said. "My last passion before I got sick was whitewater kayaking. I loved it."

An avid athlete in school, Prior has always liked hard manual labor, which she can now do only in small doses. Nine years ago, she met Carl Penske, now her significant other, on the side of the road; she was looking for help filling the hole she had made in the ground when she ripped her in-ground trampoline with the tires of her four-wheeler.

Prior said she was wearing jeans, boots and a ball cap when they met. Later, as they worked around the house together, Penske — who runs a multifaceted service business in Grand Isle — joked about how good she looked while she was working.

"I'd be getting down and dirty, and he'd laugh and say, 'Oh, you're so sexy,'" Prior said. "And then I'd pose, pretending to be sexy. And it was funny because it was the farthest thing from the truth!"

Somebody suggested that she turn the poses into a calendar, and Prior realized that could be the fundraiser she'd been looking for. But she was going to put her own spin on the pinup-girl concept.

"I had the idea of doing it like a real person, a real Vermont person," Prior said.

Take the image for February: Penske, clad in a '70s-era suit and baseball cap, holds Prior's muscular leg, which is bare except for a work boot. She wears a short, sparkly blue dress and her "Elmer Fudd hat" and holds a bouquet of dead roses. On Prior's ring finger is a makeshift engagement ring, constructed for the photo from duct tape, zip ties and a piece of gravel. The couple beams in front of an abandoned house that Penske was in the process of tearing down.

"He wanted to make a scene of newlyweds and their new house," she remembered. The caption reads, "The boots make the woman."

Pat Bannerman, who is vice president of Vermont Lyme and has had her own struggle with the disease, thinks Prior has struck gold.

"I really think she's got a great niche," Bannerman said. "For her to take the essence of the state of Vermont ... It's the uniqueness you see everywhere in Vermont. And for her to be this outdoorsy pinup girl, I think it's hysterical."

Bannerman said all proceeds from calendar sales will go to the organization's outreach programs, including public advertising and the presentation of a K-12 curriculum on the disease. It's this public exposure to the causes and consequences of Lyme disease that Prior finds crucial — so much so that she's willing to strike a pose for it.

"I'm putting myself out there as a warning that this could happen," she said. "The most important part, the reason I'm doing this, is I want to do anything I can to make sure someone else doesn't get this.

"I'm not comfortable on a soapbox," Prior added. "But I've always been comfortable with trying to help. And I'm not shy."

The Vermont Pinup Girl Calendar can be ordered via vtpinupgirl@gmail.com, or visit facebook.com/juliegagnonprior to find retail locations. vtlyme.org