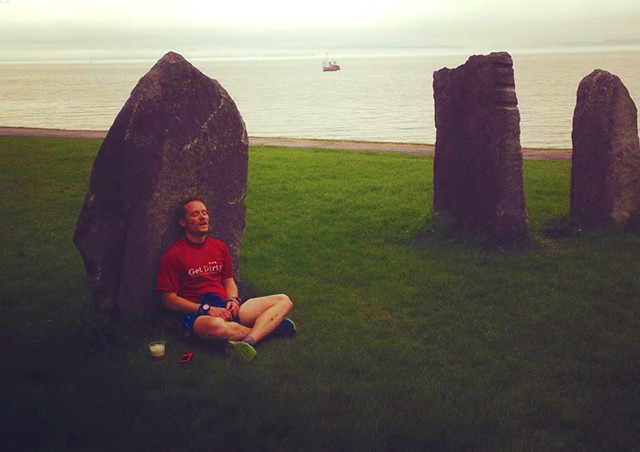 Dogs have barked at him. Wary homeowners have stared at him. He's taken selfies with cats.

And soon, Rob Rives will have navigated every public street in the City of Burlington on his own power — an unusual goal. So, um, why did he do it?

"I find a lot of my inspiration to get out and move is to go [to] brand-new places each time," Rives said. "This leads to always trying to find a new road or a new trail to run. This is the first time that I've really applied it to a city as a whole."

Rives started on his journey in May 2017, shortly after moving to Vermont. He started tracking each Queen City run or walk he took using apps such as Strava and CityStrides. To date, Rives has traveled 193 miles and covered everything except the farthest-flung points in the New North End.

There have been a few exceptions. He couldn't walk Route 127 because it's not pedestrian accessible, so he settled for the bike path that runs along a section of that roadway. The number on his odometer surpasses the actual mileage of publicly maintained city streets — that's 95 miles, according to Burlington Public Works Department Director Chapin Spencer — because he's done some stretches more than once.

"Every once in awhile I hear about people walking/running all of Burlington's streets," Spencer wrote in an email. "I challenged myself to hit as many as possible training for the half marathon this spring and hit about three-quarters of the streets in the city."

Rives, 29, is always looking for a new challenge. Now living in Richmond, the Green Mountain Club employee runs ultramarathons. This year, he became the first person to run the entire Cross Vermont Trail, a 76-mile route that begins in Wells River and ends in Burlington's Oakledge Park. It took him just 19 hours.

So wasn't urban running a bore by comparison?

"Every street will experience changes through the years to come, but I had the opportunity to build a complete idea of Burlington and to know it deeply," Rives said. "I would encourage everyone to pursue this idea in their own neighborhood, town or city."

The original print version of this article was headlined "Footloose"