A Vermonter Bags Peaks for Parkinson's on the Long Trail 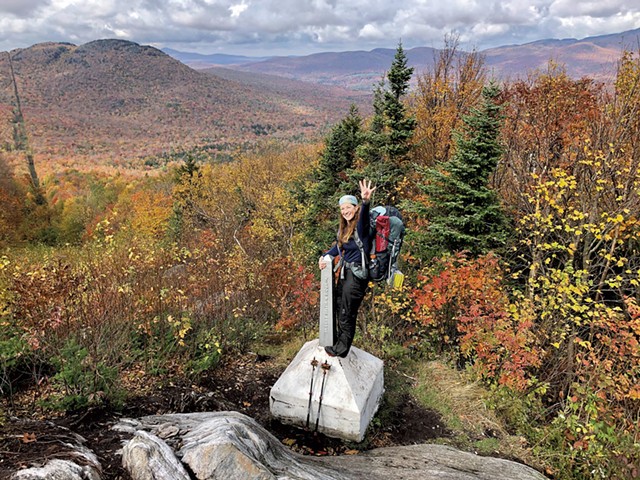 On October 3, Jocelyn Hebert stood at the Vermont-Canada border after thru-hiking the 272-mile Long Trail for the fourth time.

Hebert has plenty more to be proud of: She raised about $10,000 for Peaks for Parkinson's, a campaign she created to increase awareness about the neurodegenerative disease and to encourage those living with it to stay active.

Her father's 2010 death from complications of Parkinson's disease inspired Hebert. She realized she could use her love of the outdoors to make a difference and floated her fundraiser idea at local Parkinson's events.

She also recruited people living with the disease and their family members to join her for stretches on the trail; researchers believe exercise slows the progression of the incurable affliction.

Jim Hester was among those who joined Hebert during her 2010 hike, tackling a difficult 22-mile section that began in Bolton. He'd only recently been diagnosed with Parkinson's and stated it publicly for the first time on camera during a television interview atop Mount Mansfield.

Hester died in May 2019, and Hebert dedicated her 2020 hike to his memory. Rereading old emails she'd exchanged with Hester inspired her to retrace her steps.

"Ten years later, I find myself in transition again," said Hebert, who left her job of nine years shortly before the hike, "and Jim's words reminded me of my own strength and that I am going to do this again — and I'm going to do it for Jim."

Though she had fewer companions on the trail this year because of coronavirus concerns, Hebert said she encouraged people to hike on their own, in honor of a loved one or to keep moving after a Parkinson's diagnosis.

"If I didn't do anything else but let people know that somebody out there cares, to me, that's a success," Hebert said.

The original print version of this article was headlined "Higher Calling"