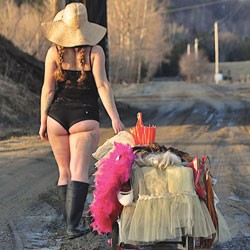 The young woman stands at the side of a dirt road holding her thumb out to an approaching vintage Ford pickup. With her other hand she firmly grasps a rope that’s tied to the neck of a goat, who’s placidly chewing on a mouthful of grass. The woman stands at an angle that reveals a profile of bare breast underneath her one-piece pinafore shorts. She is otherwise clad in cowboy boots and a frayed straw hat. Oh, and next to her on the road is a small blue suitcase with a Hawaii sticker and a blue plastic gasoline jug, its bright-yellow spout jauntily erect.

The scene is, in a word, provocative, and it’s the cover and March image in Vermont photographer Heather Gray’s 2012 calendar. (Apparently not content with the opportunities 12 months afford, Gray includes 11 “bonus” photos at the end.) The 9-by-12-inch calendar is a first for the East Hardwick-based artist, though her photos have been exhibited locally and internationally for several years, and she’s been on Etsy.com since 2008.

On her Etsy site, Gray explains her aesthetic: “Heather Gray’s work explores the intersection of photography and performance. Her images represent the notion of identity as always fluid, contextual and produced by codes deeply buried in the fabric of culture.”

That artspeak is true. But you might also simply call Gray’s “pinups” witty, sexy and flirty — not to mention staged with theatrical flair. In recent years, her “redneck chic” models have been placed in decidedly rural settings — with farm equipment, on country roads, in sugar shacks, that sort of thing. She’s also devised mother-and-child kitchen scenes that could rouse the suspicions of Protective Services. But not in the way Sally Mann’s nude pics of her children did; instead, think naked mom curled up inside the fridge.

Sexiness is a constant in these pictures, yet Gray’s temptresses seem less interested in their appeal to others than in simply flaunting their self-assured awesomeness. On her own website, Gray notes that she’s interested in “costume, identity, landscape, family relationships, displacement and narrative.” Like any female in this culture, she is keenly aware of the ways women and their bodies are typically presented, and she plays with that. But Gray subverts the usual objectifying subtexts by making fun of them, making them her own.

For example, “Miss February,” modeled by Jaquelyn “Nutty Steph” Rieke, lies nude atop a glass display case filled with chocolate (customers may never see Rieke’s Middlesex shop, or her, the same way again). Legs crossed, she’s wearing kicky pumps and a pile of chocolate bars across her midsection. A strategically placed hand covers her breast. Rieke glances sidelong at the camera with a devilish grin, holding a large rectangle of chocolate to her red lips. You can imagine both photographer and model giggling wickedly, perhaps over a cup of hot chocolate, after the shoot.

In fact, there’s a strong girlfriend sensibility in these photos, which is ironic because pinup images, such as the scantily clad “Vargas girls” of the 1950s, have always been about (heterosexual) male ogling. Not that Gray’s images won’t appeal to men — au contraire. Who doesn’t like to see girls just having fun? And who doesn’t need a calendar on which to scribble hot dates?