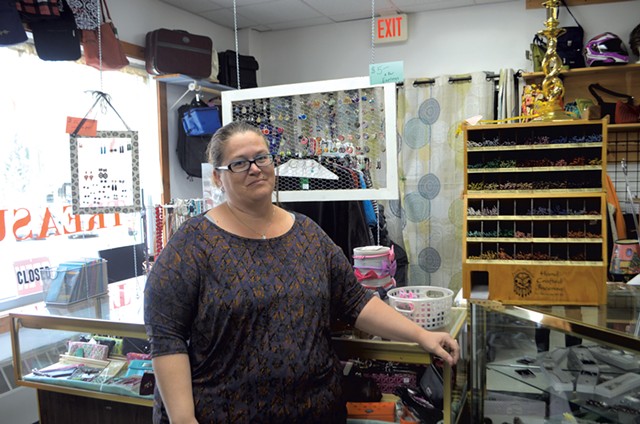 Vermont native Mikel Brady is imprisoned in North Carolina, accused of helping to murder four prison guards. Eight hundred miles north in Randolph, where his past crimes had already made him notorious, his mother is waiting to learn whether her son will face the death penalty.

Most days, Tina Brady, 44, tends to a little consignment shop she opened in August off Main Street in Randolph. She keeps her mind off her son's predicament by straightening shirts on the racks and adjusting plastic Santas on a Christmas display.

"I can focus on the good," she said one day last month as she rocked her niece's baby in one arm and tidied counters with the other.

But positive thinking has been more difficult since October 13, the day she turned on the 10 p.m. news and heard of the failed escape attempt at North Carolina's Pasquotank Correctional Institution, where Mikel, 28, was serving time for an earlier crime. Tina eventually learned that her son and three other inmates had allegedly set fire to the prison sewing shop and attacked guards with scissors and hammers, killing four. It was the deadliest escape attempt in North Carolina history.

Vermont has no death penalty, so it's rare for a Vermonter to potentially face execution. Another Vermont man, Donald Fell, could get the death penalty under federal law for allegedly kidnapping and killing Terri King, 53, in 2000.

In the central Vermont town of 4,800 people where Mikel has a highly publicized history of burglaries and assault, Tina said she feels both isolated and exposed, subject to cold shoulders and cruel Facebook comments.

There’s no excuse for what he did, but I’ll always love him.Tina Brady tweet this

"Fry his ass," she recalled reading in one comment posted alongside articles about the escape. "Worthless crap like that needs to die," read another. One Randolph commenter criticized the way Tina was running her store and lambasted her for being the mother of a "psychopath," she said.

But a mother grieves for her son, no matter how terrible his crime. "There's no excuse for what he did, but I'll always love him," she told a reporter last month.

On a November day, Tina came to work in jeans, her brown hair pulled into a tight bun. She's soft-spoken and smiles easily but seems encased in a shell of weariness. She spends five days a week at her one-woman shop, staying as late as 10 p.m. to take inventory. On weekends, she works at a local nursing home and provides home care for elderly and disabled patients. She also tries to stay in touch with her son's public defender in North Carolina.

She showed this reporter a 2012 photo of herself and Mikel. Tina is laughing, her head thrown back; he is bare-chested, mischievously grinning, with an arm around her.

Tina Hicks gave birth to Mikel Edward Brady II when she was 16, a sophomore at Whitcomb High School in Bethel. She had dated Mikel Brady Sr. since she was 14 and he was 21.

By the time she graduated in 1991, she had married Mikel Sr. and was expecting her second child, Elizabeth. Their third, Ryan, arrived four years later.

Tina said she saw early warning signs in her eldest son. He started counseling at 7 after he told a teacher that he knew how to end his life. At 10, he struck his 8-year-old sister with a knife during a game and blinded her left eye. He was diagnosed with bipolar disorder, Tina said, and resisted taking his medication.

Mikel's sister, Elizabeth Bingham, recalled that their mother was not much of a disciplinarian; Tina rarely raised her voice and never spanked the children.

In 2002, when Mikel was 12, Tina said, his father and uncle were stabbed to death defending a relative in Connecticut.

Young Mikel took the loss especially hard, his mother said. He began acting out, mouthing off to teachers and fighting, according to his sister. He had his first run-in with the law at age 14 when he stole fishing gear from a garage. When his mother arrived at a police station to pick him up, he was in a manic phase, she said, and he was sent to Brattleboro Retreat for three weeks of treatment.

Around the same time, Mikel's behavioral and mental health problems led the state Department for Children and Families to temporarily place him in foster care with relatives, his mother said.

As a single mother, Tina struggled financially. She worked as a gas station cashier before landing a job at an office-supply store, then later worked as an inventory specialist at Gifford Medical Center. A kind neighbor occasionally bought the family groceries. One December, the Bradys didn't have money for a Christmas tree.

When a teenage Mikel brought home cash for groceries or helped with rent, his mother took his word that he was hauling scrap metal for a local salvage yard. Later, she learned her son was part of a drug and burglary ring responsible for 100 break-ins.

Mikel didn't seem like a criminal, Tina said. He tried to act as a father figure in the household. Mikel would cook omelettes for the family on weekends. At 18, he bought two pigs and raised them on pastries discarded from Dunkin' Donuts to help feed the family one winter.

But, in 2008, he was arrested on federal charges for stealing 209 sticks of dynamite from a rock quarry in Bethel. In 2009, he took part in a home invasion in South Royalton in which the victim suffered a severe brain injury.

He was charged with more than 30 crimes over several years, including assault, burglary and possession of explosives. He fled to Mexico before being captured, extradited and sent to prison in 2009.

There's little anonymity in a small town such as Randolph, and Mikel's teenage reputation as a troublemaker reflected on his family. His sister, Elizabeth, remembers that her friends' parents wouldn't let them sleep over at her house because of her brother. Some considered the whole family "a bad influence," she said.

Elizabeth moved out of state after high school, partly to escape that association with her brother, she said. She lives in Massachusetts.

Tina's lack of knowledge about Mikel's crimes may have been a combination of real and willful ignorance, according to her friend Shelly Pearce. "As a mother, you try to pretend it's not your kid that's doing that," Pearce said. When Tina did know the real story, Pearce added, "She didn't do a lot about it."

Mikel was released in 2012 not long after serving his minimum sentence; a judge cited his good behavior in prison. For a bit, his life in Randolph seemed to have turned around. He worked at a butcher shop, played in a softball league and took his medications. His girlfriend became pregnant with his son. The photo his mother showed off was taken during this happy interlude.

The good times didn't last. Mikel was caught attempting to poach deer. He fled Vermont, camped in the woods of Maine and then moved to North Carolina. When a state trooper there pulled him over for a seat-belt violation in February 2013, he shot the officer four times and left him for dead.

The trooper survived, but in 2014 Mikel was sentenced to 24 years for attempted murder and other charges.

Three years later, on October 12, Mikel and fellow Pasquotank Correctional Institution inmate Seth Frazier waited in a corridor until prison employee Veronica Darden entered, and they assaulted her, according to Mikel's disciplinary report, which was obtained by North Carolina TV station WBTV.

Mikel started a fire in a storage room, passed a hammer to a fellow inmate who used it as a weapon, and was "observed ... dragging officer [George] Midgett back into the corridor area where Officer [Wendy] Shannon and maintenance man [Geoffrey] Howe were assaulted." Shannon, Howe and Darden were among the four prison employees killed. Mikel scaled a prison fence before eventually "surrender[ing] to staff," according to the report.

Mikel's latest charges brought his mother a new round of hell. She knew the drill: the grief over his actions, social media comments, alienation from some coworkers and calls from local news media.

After her initial shock, she thought, "Oh, my God, I have to deal with this frickin' shit again?"

She initially declined to allow a reporter to visit her shop when it was open, wanting to keep talk about her son far from the business. She later agreed but lowered her voice whenever a customer walked by.

"I want to be careful with this one," she said quietly, as a man entered the store. The crimes are Mikel's, but in his hometown, his family "bears the brunt," she said. Last time around, when Mikel shot the North Carolina trooper, Tina withdrew, leaving her house as little as possible.

Tina has support from a few close friends and from family members who keep her company in the store. Mikel's predicament has taken a toll on her. She's gained weight — she eats when she's stressed. She goes to counseling and takes antidepressants, she said, but sometimes she still cries herself to sleep.

One moment, she wondered about the extent of her son's involvement in the escape attempt; in the next, she said she fears her new shop could fail "because I'm related to a murderer."

Sometimes, she thinks she'd be spared anguish if he were condemned to death. Then she remembers the "good Mikel," the kid who was a second father to his brother and who took pity on so many stray dogs that they once had 18.

"I know she feels alone," said Tina's friend Raylene Barkley. "A mom's job is to protect her baby. She's scared for him."

In early December, a North Carolina district attorney is expected to announce whether he will seek the death penalty for Mikel and his codefendants.

"I'm grieving as if he died, but he's really not dead," Tina said. "When you carry a baby for nine months, teach them to walk and talk, teach them to cook eggs and toast, and go on camping trips—" she trailed off. "Then you look at those things and think your son might die, because somehow or another you could never save him."