A Vermont Inventor's Self-Controlled Generators Put You in Charge 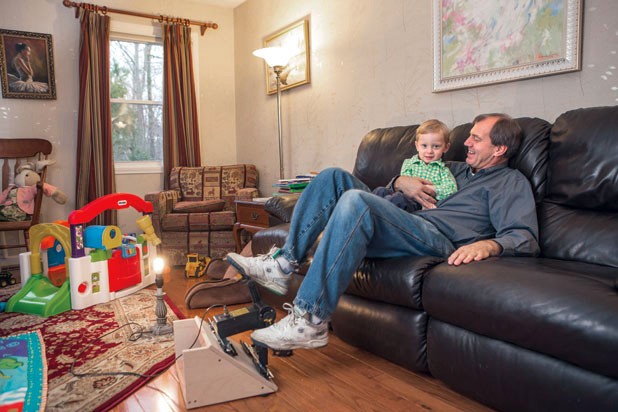 As an inventor, entrepreneur and engineer, Ken Torino has based his life’s work on math and science. But when he describes K-Tor, the business he started in 2008, Torino refers to some cinematic science fiction: The Matrix trilogy.

In the universe of those films, robot overlords draw their energy from billions of humans enslaved and plugged into a power grid. Torino likewise bases his mechanical creations on the premise that humans are capable of generating 75 watts of energy at a steady rate. But his way of harnessing that power is far more humane than the machinery that Neo escapes after he swallows a red pill in The Matrix. Torino’s inventions give you control over your own machines, not the other way around.

For the past six years, Torino, 59, has been designing and selling two types of generators from his Colchester home. His first invention, the Pocket Socket, was a hand crank about the size of a water bottle that generates up to 10 watts of electricity at 120 volts — on par with a standard wall outlet. Later, Torino developed the Power Box, a stationary set of bicycle pedals that delivers the same result.

If every person on Earth were to use one of his inventions, Torino speculates, they could generate a third of the energy now produced by all of the world’s nuclear reactors. But for now, he admits, his market mostly consists of people wanting to charge their smartphones, digital cameras or tablet computers on the fly, or in a carbon-free, semi-aerobic manner. With a 120-volt socket on each generator, all you need is a basic power cord to use one.

An employee of IBM for 30 years, Torino says the “aha moment” for the K-Tor technology occurred on a business trip, five years before his 2007 retirement. When his flight back to Vermont was delayed by a storm, he needed to make a call but couldn’t recharge his cellphone without losing his spot in the long line at the ticket counter. Upon returning home, Torino searched online for a portable, hand-crank generator that would have done the trick.

“But I didn’t find anything, so I decided that if they didn’t invent something like that before I left IBM in five years, I would. So I did. It was a little bit harder than it sounds, believe it or not,” Torino recalls.

The field wasn’t totally new to Torino, who had concentrated in microprocessor design and power while getting his bachelor’s and master’s degrees in engineering at Cornell University. When he graduated from that program during the 1973 oil embargo, his first job was doing power-motor work for Reliance Electric Machine Company.

Even though Torino had a mechanical background, his new enterprise required several years of R&D. Lots of hand-crank radios and flashlights now on the market advertise their capacity to recharge other electronics, Torino points out. But his goal was to make a device that would follow through on that claim for smartphones and other high-end electronics that transmit a signal and would have more in common with a computer than with a radio or flashlight.

Toward that end, Torino created two tests for the Pocket Socket: It should be able to revive a cellphone with a dead battery, and do so consistently. After two months of successfully using his device for 20 minutes daily to recharge his Motorola Android phone, the inventor felt comfortable placing it on the market. Its current retail value is $65. The Power Box goes for $195. Both are made in California, but development, testing and repairs are done here in the Green Mountains.

So do they work? To demonstrate the device’s functionality, Torino again attaches his Motorola to the Pocket Socket. Sure enough, after several cranks, the juice in the battery starts to climb steadily.

Next, this reporter tries the Power Box. The experience is akin to pedaling a recumbent, stationary bike, though it’s less of a workout. With the box placed in front of a couch or easy chair, you simply put your feet on the pedals and begin spinning, and the percentage points on the phone start to rise. You could do it while watching TV or reading a magazine. In theory, you could use the Power Box to read from a Kindle or other e-reader without ever having to plug the device into a wall outlet.

One benchmark of Torino’s success is the patent he received for his generator technology in January. Another: In the wake of last year’s holiday season, K-Tor earned Amazon’s top-seller status for the Pocket Socket’s sales and ratings, ranking in the online retailer’s top 25 percent.

That success may have stemmed in part from a rush of orders after Hurricane Sandy. Torino, originally from Queens, N.Y., says his elderly mother was among those stranded without power after the storm. More recently, the inventor notes, a man making a relief trip to the Philippines after Typhoon Haiyan ordered several Pocket Sockets for his radios.

Two products now in Torino’s pipeline are a generator that can attach to a bike chain and a more efficient pedal-power generator for those who may have no other option when the lights go out. But for now, the inventor is more focused on developing a market, or, at least, on finding the professional who can connect him with one.

“Post-Katrina, people have been saying to me, ‘God, I wish I’d had this thing. I was there for a week with people wondering if I was alive.’ The question is, how do you make the connection?” Torino says. “I’ve gone to all the FEMA conferences, but I’m still looking for that someone who can take it to the next level.”