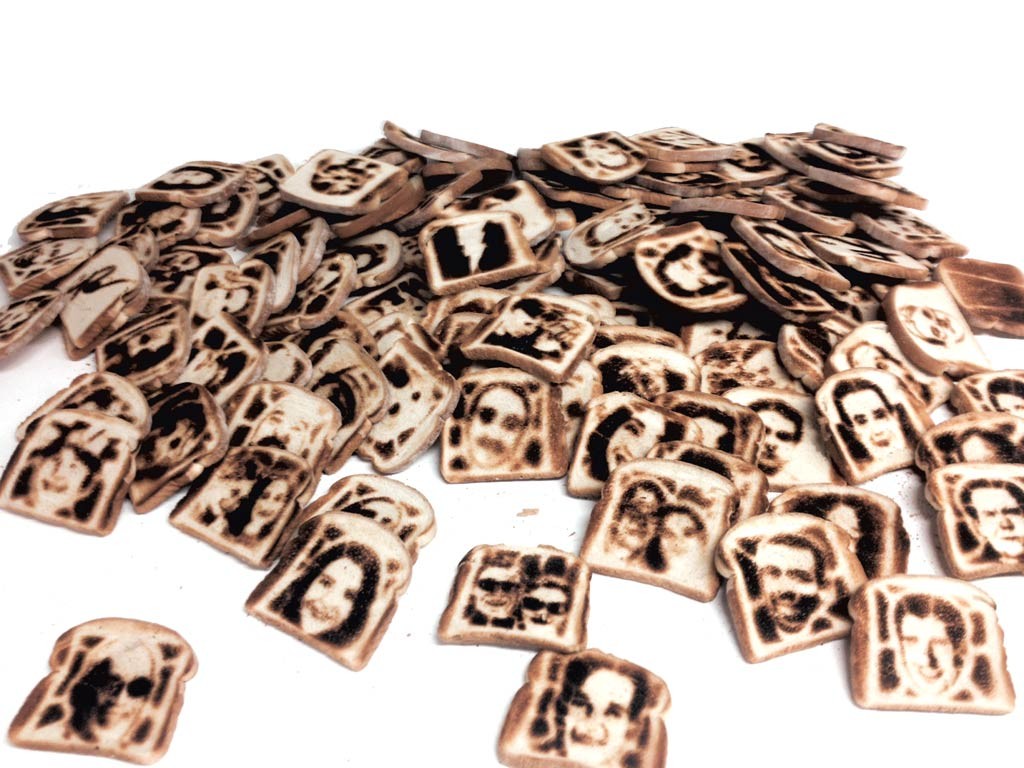 The piece of toast Galen Dively hands me is not his best work. The conventional white-bread toast is supposed to have my smiling face emblazoned on it. I stare at it for a minute, not entirely sure what I'm looking at. I rotate it a couple of times. I hold it closer to my eyes, then farther away. Then, as if I'm looking at one of those Magic Eye posters with a sailboat or a lion hidden in some trippy, multicolored pattern, I can see it. Sort of.

Dively, 49, is the founder of the Vermont Novelty Toaster Corporation. For the past four years, he's made his living building and selling toasters that imprint various images on toast, such as pot leaves and peace symbols. But his most recent invention taps into modern culture's increasing obsession with, well, itself: selfie toast. For $79.50, Dively and his four-person crew will take your favorite self-portrait and build you a toaster that allows you to munch on your own face every morning — or that of your dog, or Jesus.

(Sorry, Deadheads, no Jerry toast yet, though Dively says he's had informal discussions with the Garcia estate about licensing opportunities. In the meantime, you could ask Dively for a toaster that reproduces his own image, as he bears a striking resemblance to the late Grateful Dead front man. And yes, he drives an old Volkswagen microbus.)

My toast makes me look kind of like I have mutton chops — a facial-hair choice I've long admired but never attempted. It also looks as though I might be exhaling a plume of smoke. But since Dively took a pic from my Facebook profile, where I'm pretty sure no such incriminating pics exist, the effect is more likely the result of a toaster rushed into production.

That's understandable: Dively has been in a major production crunch of late. About three weeks ago, CNN and FOX News picked up on the selfie toaster. Since then, Dively's toasters have been covered by the Los Angeles Times, the UK's Daily Mail, Time magazine, "The Today Show" and many other media outlets around the world. A recent story by reporter Gina Bullard at local CBS affiliate WCAX was picked up by the network and went national.

Dively says he's been making selfie toasters for about a year now, but "could count on two hands" the number of them he'd sold before the media blitz. In the past few weeks, he says, he's received more than 400 orders, as the shop's massive pile of toast slices bearing smiling faces and various symbols attests. So Dively can be excused for having hastily banged out mine the night before I show up at his St. Johnsbury office.

Dively says he can crank out a selfie toaster in less than an hour. First, he loads a customer-submitted image into Photoshop and tweaks it for sharper contrast. He then creates a reverse silhouette of the image — think photo negative — and loads it into a program linked to a plasma cutter. The cutter carves a stencil into a small metal plate, which, once it's been ground down and smoothed out, is inserted in front of the heating element of a toaster. The metal sections block heat from reaching the toast. Ideally, the resulting burn marks from the open spaces on the stencil create the image. And, more often than not, it works.

Bullard's toast, for example, is a pretty accurate rendering of the reporter's smiley visage. Ditto the toasts created for Al Roker and Matt Lauer of "The Today Show."

"You news people always just have to have your own toast for these stories," Dively teases.

Dively is a Pennsylvania native who went to college in Maryland. He says his only "real job" was working in a print shop for about a year, after which he quit to follow the Dead. During that time, he made his living — you guessed it — selling tie-dyed T-shirts, which he still does on the side, along with some custom picture framing.

"I've always been into graphic-design stuff," he says. "But working a day job never really suited me. So I've always tried to find other ways to make money."

Dively lives with his wife and children in Walden in a house he built shortly after his marriage more than 20 years ago. He also owns rental property in Washington, D.C., which helps to supplement his income.

Where did his breakfast-food brainstorm spring from? Dively says he got the idea for novelty toasters several years ago when he bought a Hello Kitty toaster as a gag gift for a friend. "I thought it was pretty neat," he says of that device, which imprinted the Hello Kitty logo on toast. "Then I thought, I wanna put a pot leaf on a piece of toast."

"I've been here about 18 hours a day for the last three weeks to keep up with the demand," he says. When the media blitz started, he asked the local grocery store to order 20 extra loaves of bread per week. "I told them we were gonna need a lot of bread."

Until recently, Dively's Chinese toaster connection handled most of his manufacturing, including producing the metal stencils. But when he purchased the plasma cutter, he was able to shift most of the operation to his St. J workshop and drastically reduce costs.

"Given the volume we're producing, it would have been impossible to do this any other way," Dively says. "I mean, that's just the backlog over there." He points to a table crammed with boxes of selfie toasters awaiting shipment.

Dively adds that he and his four employees are still streamlining the process of cranking out toasters on a larger scale, and they'll likely add staff to handle the inevitable holiday rush. But if the mounting pressure of success is getting to him, you'd never know it.

"It's not like we're curing cancer or anything," Dively says, chuckling. "We're making toast."

The ludicrousness of his latest venture is not lost on him.

"It's all really silly, of course. But I guess I've sort of tapped into people's narcissistic love of themselves," Dively says. "And toast."

The original print version of this article was headlined "Eat Me"