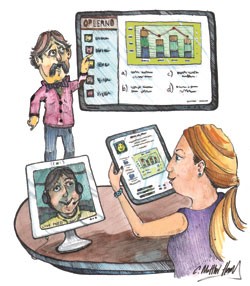 The student loan crisis has caught the federal government’s attention, but it’s not the only systemic problem plaguing higher education. The list of troubles is long and complex: grossly inflated administrative salaries carried on the backs of inflated tuition, decreased educational budgets for both public and private schools, student dissatisfaction with course offerings, the exploitation of adjunct and limited-term faculty. The refrain is constant: The system is broken.

South Burlington resident Robert Skiff believes not only that the system is broken but that it’s getting worse. And he proposes to do something about it.

Skiff has a new online academic venture called Oplerno. It doesn’t aim to be an all-purpose solution to the crisis in higher education, but he believes that the moment has arrived to use technology to address problems in a way that will benefit both students and faculty.

Skiff estimates that by 2020, nearly 230 million people worldwide will seek higher education — up from about 135 million today. “We can’t expect to double the physical infrastructure of higher education to meet that demand,” he says. “Nor can we expect them to get in airplanes and come to the States. But we can create — if we redesign higher education from the ground up — institutions and organizations that can offer classes to students.”

Oplerno is not yet up and running — accrediting agencies’ approval must come first — but its infrastructure is partially in place. At root, Oplerno is an online learning platform that enables faculty members to teach courses asynchronously with up to 25 students. The interface will accommodate everything we have come to expect from the online experience — text, live chat, audio, video, filesharing — and will be accessible via web browser and smartphone app.

Oplerno’s name is a condensation of its stated mission — open learning organization — and was chosen precisely for its meaninglessness acrosss multiple languages. Though Skiff resides in Vermont, he always intended Oplerno to be an international operation. (With his wife and father, Skiff founded the Vermont Commons School, a college preparatory school for grades 7 to 12, in South Burlington in 1995.) Not only is Oplerno built atop the world wide web, but its officers are spread out all over the globe. The director of operations is in Bend, Ore., and the director of technology resides in the Netherlands.

Skiff, who has nearly completed his EdD at the University of Vermont, first recognized the educational potential of the internet about 20 years ago, he says, when he was working as an educator in Quito, Ecuador. Taking advantage of library sites such as Project Gutenberg and transfer protocols such as Gopher, he vastly increased the size of the school’s small library. “There’s an amazing equalization that can occur with technology if it’s deployed properly and equitably,” he says.

Skiff returned home to Vermont with the goal of establishing an online high school, but technology was not yet up to the task. Determined to offer more than a correspondence school, Skiff waited it out. The smartphone revolution provided the necessary technological opportunity at precisely the moment when even prestigious institutions like the Massachusetts Institute of Technology acknowledged that “conventional” models of higher education are insufficient. MIT is a pioneer in offering “MOOCs,” the Massive Open Online Courses that represent one attempt to use the internet to democratize higher education.

Oplerno’s model is different, though Skiff finds nothing wrong with the way MOOCs operate. “I prefer to learn from other humans in small groups,” he says. “It’s how we’ve learned for thousands of years.”

While Oplerno’s courses will be capped at 25 students, minimum enrollment numbers as well as tuition costs will, unusually, be determined by professors. (The website states, “Oplerno believes that between $500 and $1000 is a reasonable fee to charge a student.”)

Professors will receive 80 to 90 percent of the course fees paid by students; Oplerno will collect the remainder. With that 10 to 20 percent, Skiff intends to ensure a high quality of education. “This is not to make a bunch of money. I’m more interested in making a difference than in making a buck,” he says. Besides, he adds, “There’s not a whole lot in higher ed that is not for profit.”

A 2009 study by the American Association of University Professors showed that, as the numbers of tenured and tenure-track faculty members have fallen, universities have relied much more heavily on adjunct and other non-tenure-track faculty to teach courses. Between 1975 and 2009, the average percentage of tenured professors in university faculties dropped from 29 to 16.8 percent. Over the same period, the average percentage of part-time faculty climbed steeply, from 24 to 41.1 percent. What this means is that more university courses are being taught by professors who are poorly compensated and overworked, have no job security and receive few, if any, benefits. (Full disclosure: The author is currently an adjunct professor.)

Skiff believes that the great many underemployed adjunct professors are the perfect candidates to become Oplerno faculty members. “They’re phenomenal teachers,” he says, “and they’re getting the short end of the stick.”

One of the principal challenges that Skiff believes Oplerno will address is that of designing an educational system that incentivizes high-quality teaching and the creation of “the new great courses.”

Oplerno will also challenge standard practice at American universities in the area of intellectual property. Depending on the conditions of their contracts, many American university professors do not actually own the courses they create. The lectures, syllabi, assignments and other teaching materials remain, in some cases, the intellectual property of the university where they are used. Compounding the problem is many faculty members’ ignorance of such restrictions, a situation that can lead to legal difficulties down the road.

Oplerno’s faculty members will own their course materials outright, and Skiff insists that he will carefully vet all faculty members’ teaching materials to make sure they are not “imported” from another institution.

Oplerno’s challenges are many and steep: It must attract qualified faculty as well as the body of engaged learners whom Skiff hopes to have as students, and it must receive formal approval from accrediting agencies. But perhaps its most important and daunting task is that of combatting general perceptions about online education. For most people, that is associated with for-profit “diploma mills” such as the University of Phoenix; seat-of-the-pants (if sincere) entities such as Khan Academy; and MOOCs. Oplerno’s mission — to offer elite, personalized, college-level education via the internet — is of a different order.

The past few decades have seen a number of small, progressive colleges throughout the U.S. experimenting with advanced-degree “low-residency” programs as a means to address inequities in higher education. (Several such schools are located in Vermont: Bennington College, Burlington College, the Vermont College of Fine Arts, and Goddard College, where low-residency programs were first developed in the early 1960s.) Students in low-residency programs complete much of their coursework online, but, in contrast to Oplerno, students visit campus for a few short stints every semester to work in person with faculty and peers.

Skiff’s solution to the problem of public perception is one of radical transparency. With the pointed exception of students’ personal information, Oplerno will make almost everything about itself public: its professors’ qualifications and salaries, its accreditation process, its budget and spending, the ratings its students give to their professors and courses. “If I buy lunch for someone, my faculty and my coworkers should see who I buy lunch for,” Skiff says. “Everything needs to be public.”

Such transparency, he believes, will foster the confidence and accountability that he finds lacking in the current higher-education model. “Education should be an apprenticeship where both teacher and student are learning,” Skiff says. “I think people are going to be psyched and happy to be a part of this.”

Oplerno has already signed on 42 people to produce course content, and Skiff hopes to complete the accreditation process in time to begin offering classes in the first quarter of 2014.

Penny Bishop is a professor of education at the University of Vermont and director of UVM’s Tarrant Institute for Innovative Education, as well as a member of Skiff’s dissertation committee. She says that, although Oplerno offers a “fairly traditional online education program, in that it does not propose a means of alternative credentialing,” it distinguishes itself in presenting its courses within an alternative economic framework.

“In having instructors set their own prices for courses,” Bishop says, “it introduces a degree of instructor competition, if, for instance, you have similar courses being offered at different prices.”

She notes that Oplerno is not likely to attract students who simply want to acquire skills and knowledge, as sufficient free online resources (including MOOCs) now exist to allow for such self-education. The school is much more likely, Bishop says, to attract students who want or need a transcript- or degree-based education. That means Oplerno is “certainly competing with Walden University, University of Phoenix and others, but in a much more affordable way.

“I do think it has a chance of succeeding,” Bishop adds. “It’ll become a question of reputation. If they’re able to establish themselves right out of the gate as offering high-quality programs, then I think it’s an interesting model that has potential.”

Skiff is genuinely passionate — not just about Oplerno but about the true purposes of education, and about mending a system whose current, unsustainable model he believes is damaging both to learning and to employment equity. But he has no illusions that he has found the ultimate solution to a highly complex problem. “Oplerno is an answer to the crisis in higher education,” he remarks. “It is not the answer. There are tons of answers, tons of optimal solutions to our problems. It’s foolish to think there’s any one perfect solution.”

Skiff refuses to characterize himself as a “disruptor” of the current educational system. Rather, he says, he’s just returning to the way things used to be, when scholars offered instruction to students in open, public forums. “I’m going back to the agora. I’m just using technology to do it.”

The original print version of this article was headlined "International Ed"