A UVM Prof Explores Why We Love the First Lady 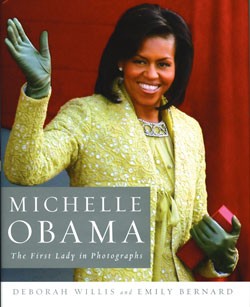 During the 2008 presidential campaign, an ad for Sen. John McCain hurled the word “celebrity” as an epithet at Sen. Barack Obama, comparing him to Paris Hilton and Britney Spears. This bizarre charge generated memorable responses. “Oops! He did it again,” noted an Obama spokesman about McCain’s continued “false, negative attacks.” Hilton’s cheeky YouTube reply to “the wrinkly, white-haired guy” labeled him “the world’s oldest celebrity.”

Of course, the Obamas have become international celebrities. In Michelle Obama: The First Lady in Photographs, essays by coauthors Deborah Willis and University of Vermont professor Emily Bernard explore the cultural significance of Mrs. O’s fame. As Bernard points out, the First Couple’s popularity represents the antithesis of the seedy tabloid notoriety implied by the McCain smear. Michelle, in particular, the prof writes, “is an oasis of reserve in a shameless culture in which so many of us seem driven by the need to expose, divulge, and consume.”

In a conversation with Seven Days, Bernard, who teaches African American literature, admits she didn’t know much about the First Lady before Willis, a professor of photography at New York University, asked her to collaborate on the book. As Bernard began to do research, what immediately struck her was the media’s “hunger for news about Michelle Obama,” she notes in the essay. The current FLOTUS received four times more coverage than Cindy McCain during 2008.

The volume’s 200 images, selected by Willis, encompass the campaign, inauguration and first year in the White House. Some photos catch Michelle in quiet moments: walking with an arm around daughter Malia; kneeling in the White House garden as she ponders where to plant thyme. Others capture historic hours: striding into Grant Park with her family on election night; holding Abraham Lincoln’s Bible as her husband is sworn in as president.

The pics transfix us, Willis writes, in part because the “American public has never come to know so intimately an African American woman who is not a performer or an athlete.” Both essays note how pundits have frequently made simplistic comparisons of the First Lady to “The Cosby Show”’s Clair Huxtable. Bernard looks at the complex ways in which Michelle’s South Side Chicago upbringing, as well as her family’s South Carolina roots, contributed to her character development. “Michelle Obama offers a more realistic story about a woman who is firmly grounded in a rich cultural, geographical and racial context,” says Bernard in the interview.

“Many women, not just black women, find themselves in Michelle Obama,” Bernard continues. “As a wife, as a mother, as a woman trying to balance a professional identity against the demands” of domestic life. “She manages to achieve that image of the wholesome American woman who puts family first, without compromising her sharpness, intellectual gifts and fierceness.”

Bernard admits that negative motives, especially racism, drive some of the extra attention. “There will always be this scrutiny, this suspicion,” she explains. “As much as there is wonder and fascination and admiration, I think there is a real sense: ‘Let’s catch her at something.’”

Working on the book “has made me think a lot about celebrity,” Bernard reflects. “And how one has to carefully cultivate one’s public image. And how it’s important also, to be successful, to seem as if you’re not cultivating it.” She admires how the First Lady handles the demands of living in the spotlight. “The way that she is managing that — with both a wry self-consciousness and a wry awareness, without compromising personal integrity — is fascinating to me.”