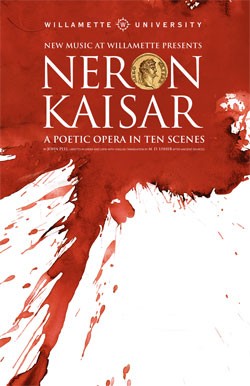 Americans are writing new, intriguing-sounding operas all the time. In the last five years alone, operas about Walt Disney and John Brown have premiered, and a work based on author Annie Proulx’s story “Brokeback Mountain” will be sung next year.

Of course, these operas are usually in English. But M.D. Usher, associate professor and chair of the classics department at the University of Vermont, and Oregon-based music professor John Peel were apparently looking for a bigger challenge. They decided to write an opera about Nero in the languages the first-century Roman emperor actually spoke: Greek and Latin.

Selections from Neron Kaisar will premiere this week at Willamette University in Salem, Ore., where Peel is composer-in-residence and Usher used to teach. The title is a transliteration of Nero’s name as it appears in Greek.

An opera in one ancient language and another dead one? Usher, the librettist, says the rarity of the enterprise was part of the draw. He previously collaborated with Peel on an opera oratorio in Latin, Voces Vergilianae, which was based on Virgil’s Aeneid and premiered in 1999. “We always wanted to collaborate again,” Usher says by phone, “and we thought Greek would be good because it hasn’t really been done before.”

That is, aside from the efforts of two other brave souls he can think of: Greek native Mikis Theodorakis, who scored Aeschylus’ Oresteia in the mid-1980s (not to mention iconic films including Zorba the Greek); and the Pulitzer Prize-winning American composer Elliott Carter, who was reportedly working on a Sapphic song cycle before he died last November. “And us,” Usher adds.

The Shoreham resident can speak both ancient Greek and classical Latin — “which is not Church Latin,” he specifies. The singers? Not so much. Usher phoneticized the libretto and Skyped with the performers to ensure they could at least pronounce their parts. “It was really quite an amazing experience to hear them speaking Greek, even though they didn’t know what they were saying,” he recalls.

Ancient languages aside, Neron Kaisar is surprisingly relevant to current American culture. While Nero’s life seems tailor-made for opera — the despot murdered his half-brother, mother (with whom he had an incestuous relationship) and two wives before committing suicide at age 30 — Usher chose to focus on his “subcareer” as a singer, poet and musician who played the kithara, a large lyre.

Nero longed for fame in the musical world of his time, and his obsession is meant as an ironic comment on Americans’ infatuation with celebrity singers today, according to program notes. One scene features an “American Idol”-like competition between Nero and other soloists who sing poems by Sappho, Alcaeus and others from the Hellenic repertoire that was popular in 55 A.D.

“Nero never wanted to be emperor,” Usher explains, noting that the ruler was crowned at age 17. “He just wanted to be the equivalent of a modern rock star with his modern boy band.”

Usher hopes the opera will one day be staged in Vermont, but it’s not the language barrier that makes that unlikely. As the composer points out regretfully, “It takes a lot of money to put on an opera.”

The recording of the Willamette University performance of Neron Kaiser will be posted at Willamette’s college of liberal arts website following the performance on Wednesday, March 13.