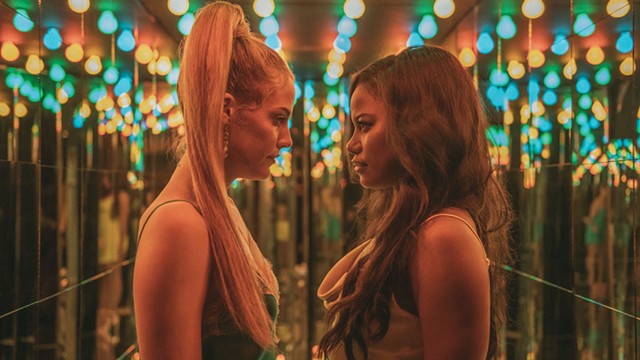 Our streaming entertainment options are overwhelming — and this week, instead of exploring them, I visited Burlington's reopened Merrill's Roxy Cinemas. In the same screening room where I saw my last pre-pandemic movie (Emma), I watched Zola, a hit at the 2020 Sundance Film Festival and perhaps the first-ever film based on a Twitter thread.

In October 2015, a young Detroit woman named A'Ziah "Zola" Wells King tweeted: "Y'all wanna hear a story about why me and this bitch here fell out?! It's kinda long but full of suspense."

The tale that unfolded in 148 tiny posts mesmerized Twitter users with its dark humor and bizarre twists. Now it is a film, directed by Janicza Bravo (Lemon), in which Taylour Paige plays Zola, a waitress who strips on the side, and Riley Keough plays "this bitch," aka Stefani. (The names in King's story were changed for the film.)

In the screen version, which also takes some material from David Kushner's Rolling Stone piece on the viral thread, the two women meet at Zola's workplace and hit it off immediately. Within a day, Stefani invites Zola on a road trip to Tampa, Fla., where she assures her that the two of them can make big bucks dancing at clubs.

The women's companions on the road trip are Stefani's clueless, puppyish boyfriend (Nicholas Braun) and an older man known only as "X" (Colman Domingo), whom Stefani eventually admits is her pimp. Zola isn't happy when she learns what kind of moneymaking activities X actually has in mind. Luckily for her, she has smarts and ingenuity on her side.

In adapting King's tweets into Zola, Bravo (who cowrote with Jeremy O. Harris) must have faced formidable decisions about tone. At its core, this is a story about sex trafficking, a crime with which the real person behind the X pseudonym was eventually charged.

The story shouldn't be an amusing thrill ride — and yet, as told by King on Twitter, it is. Her thread, which she freely admitted involved some hyperbole, belongs in the venerable tradition of the American tall tale. Guided by the narrator's cocky, irreverent voice, we trust Zola to triumph over whatever she encounters. By telling us she couldn't help laughing at one disturbing juncture, Zola gives us the release valve of laughter, too.

But a story enacted on screen is no longer under the sole control of its narrator. The film medium cuts the tall tale down to size and brings it closer to sober reality, even as Bravo employs stylistic devices to remind us we're still seeing one person's biased, creatively enhanced account.

Zola narrates the movie in a lively voice-over. A recurring cuckoo sound effect evokes the Twitter medium. Mica Levi's soundtrack is full of harp trills that suggest we're watching a twisted fairy tale — the world's seediest Disney princess movie. And at one point the story comes to a record-scratch halt so we can hear Stefani's competing version of events, which is the movie's funniest sequence. ("Everybody loved me," she recounts repeatedly, preening.)

Keough's over-the-top performance is funny throughout, as are Paige's reactions to her. It's easy to see why Zola forms an instant bond with this party girl — and why that bond doesn't survive a long car ride. As Stefani (who is white) prattles on tirelessly in her affected African American Vernacular English, we watch Zola's expression morph from incredulity into borderline disgust. From then on, her justified annoyance with Stefani clashes with her empathy for this woman who is also, to some extent, a victim.

The Twitter thread didn't offer quite so much nuance. But it did offer up-front information that Bravo sometimes withholds to no clear purpose. When X gives Zola instructions, for instance, we see them interact in silhouette without hearing them — an arty effect, but not a helpful one.

In scenes like this, the oblique aesthetic of indie film betrays the straightforward nature of the tale that Zola originally told. Other scenes, by contrast, have a hilarious bluntness. Throughout, viewers may wonder precisely what they're watching and how they should react to it.

That tonal shakiness may leave some confused. And if you hope for a redemptive takeaway, you'll be disappointed. But the anarchic power and novelty of Zola's story survive the transition from tweet to screen, proving that sometimes truth really is stranger than fiction.

American Honey (2016; Showtime, Kanopy, rentable): In Andrea Arnold's freewheeling indie, a teen girl takes off across the country with a traveling sales crew. Like Zola, the movie takes a fresh, uncondescending approach to life on the margins.

The Bling Ring (2013; Netflix, Lifetime Movie Club, Kanopy, rentable): In Zola, a put-it-all-out-there youth culture finds itself in an uneasy marriage with the more austere aesthetics of indie cinema. The same conflict shapes this drama from Sofia Coppola, the fact-based story of a group of teenage thieves who steal from celebrities.