Ameen Idris poked his head in the door of the newly relocated Mawuhi African Market at 336 North Winooski Avenue last Friday with a smile on his face. The young man had also recently moved — from Tennessee to Burlington — and was seeking familiar foods from his native Nigeria, he said.

An internet search had directed Idris first to the market's former location at 160 North Winooski. There, for more than 14 years, Mawuhi's owner, Pat Bannerman, offered frozen mackerel and goat meat, dried stockfish, palm oil, Maggi seasoning cubes, and other African cooking staples before she lost her lease when the building changed hands. 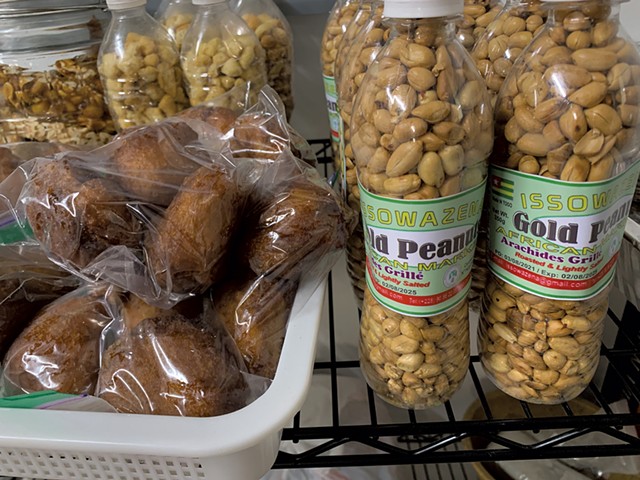 With the help of Will Clavelle of Burlington's Community & Economic Development Office, Bannerman eventually found a new spot just over a quarter mile down the street. When she reopened her market in mid-February, it became one of three food-related businesses operating in the freshly renovated building that used to house the Salvation Army Thrift Store.

The current owner of 336 North Winooski is Mike Rosenberg, who bought it in April 2020 to house a production facility for Garuka Bars, the energy bar company he founded in 2011.

Like many Vermont food entrepreneurs, Rosenberg has struggled over the past decade to find affordable commercial kitchen space. When he first looked at the empty thrift store, "I thought, This is terrible," he admitted, but he gradually began to see its potential. Still, it needed a lot of work and more tenants to fill the 5,000 square feet of finished space.

"I told Will [Clavelle] I was trying to gather a group of like-minded businesses," Rosenberg said. He knew there was a need, and "it's nice to be around other food businesses," he said.

In November 2021, after a long renovation, the Garuka team started making 3,000 to 5,000 energy bars a week in a 1,200-square-foot facility. Mawuhi occupies about the same amount of space; in addition to food, the store sells other hard-to-find products favored by those of African heritage.

Although Bannerman's business does not produce food, "Once I met Pat, I couldn't not rent to her," Rosenberg said.

Bannerman was very pleased to find a spot so close to her old store. "I like that it's in the Old North End neighborhood, which has been very good to me," she said.

The only downside is that the suite within the building is not as visible as her original brightly painted storefront, Bannerman said. A sandwich board out front helps, but "some people don't see it and drive around looking for me."

A third tenant, Rachel Collier of the Simmering Bone, will soon occupy an 800-square-foot kitchen in the building. Over seven years of making her broths featuring locally sourced chicken, beef, lamb and veal, Collier has repeatedly run up against the lack of "consistent, reliable production space in the state," she said.

Collier currently makes two-hour round trips to use a kitchen in Montpelier, but once she resolves some equipment issues, she will have a dedicated kitchen 20 minutes from her home.

"It's totally a game changer for me," Collier said.

The original print version of this article was headlined "Tasty Trio"