A Trio of Early Spring Walks and Nearby Eats in Vermont 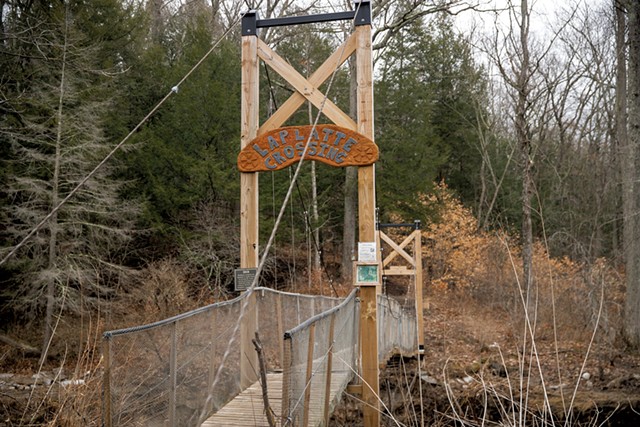 Throughout the pandemic, I have stayed sane, and active, by getting outside and exploring nature at least one day every weekend.

During summer and fall, I was up for ambitious, full-day hikes. Colder days are better suited to briefer forays, but Mother Nature still delivers the much-needed reprieve from endless video meetings and household chores.

As we slowly move from a long winter into early spring, it's best to plan your outing carefully to avoid squelchy trails. If you're going on a walk, the Green Mountain Club recommends sticking to low elevations and south-facing slopes — and turning around if you encounter mud. Tread patiently and gently as you assess the conditions, even if that means covering less ground.

Rather than race to the view, I wind through the woods at a leisurely pace, relishing the journey as much as the destination. I pause to admire shelf fungus marching up tree trunks, touch velvety emerald mosses carpeting old stone walls and peer skyward to spot the woodpecker responsible for that ratatatat.

Part of the fun has been finding new-to-me places to investigate. Sometimes the destinations are super close: How did I not know there's a suspension bridge and a troll in Shelburne? Others have long been on my list, such as the striking Millstone Trails winding quarry-side through Barre and Websterville.

And then there is the draw of nearby good eats. I'm what they call "food-motivated." I'd probably walk along the banks of the River Styx if it put me in the vicinity of a maple milkshake. Luckily, Vermont offers far more pleasant options. Here are three. 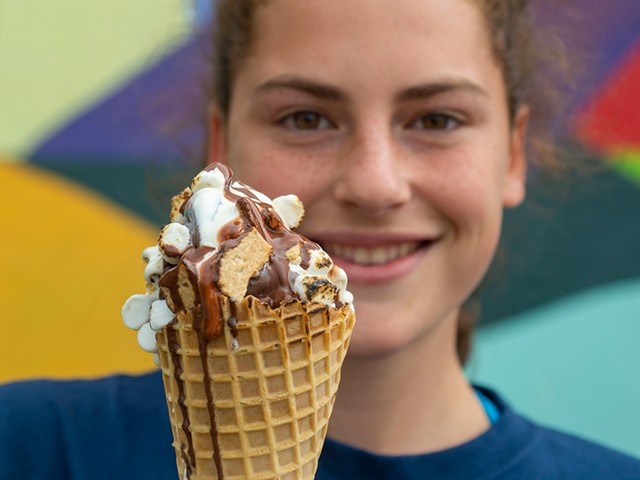 The Mad River Valley is a favorite, year-round outdoor destination for my family. The oasis of great food and drink along Waitsfield's Main Street doesn't hurt. On a recent but still-snowy day, my husband identified our destination in Fayston's Chase Brook Town Forest on AllTrails, and we planned a late grazing lunch for after our walk.

The small parking area and trailhead for the town forest are easy to find, right across from the Fayston Elementary School next to a lovely old barn. A sign explains that in 2005 the Town of Fayston bought the 72-acre forest, "part of an iconic hill farm ... now managed by the Fayston Conservation Commission for environmental education, community recreation and wildlife habitat."

I could imagine happy schoolchildren running the length of the bridge over the Chase Brook at the start of the trail. I would love to return in warmer weather to sit on the double Adirondack chair overlooking the water.

We thoroughly enjoyed our mellow trek of less than three miles round trip to a nice clearing and view at the top. There were plenty of downed logs and small streams to investigate. As one AllTrails user said, "Good for kiddos!" 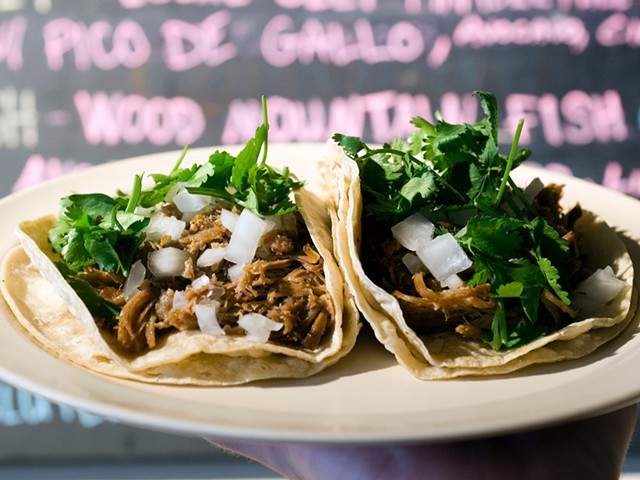 Driving back down into town, we called in our takeout order to the Mad Taco for a mix of their very good tacos, including carnitas, smoked pork belly and house chorizo.

While we waited for our bagged order to appear in the window, we zipped across the parking lot to Canteen Creemee for an "appetizer" of a small maple milkshake and a small cherry-maple twist. And then we popped across the road for beer from the Lawson Finest Liquids' drive-through and cider from the Mad River Taste Place. The latter has the best selection of Vermont cheeses and a wide array of other local specialties. 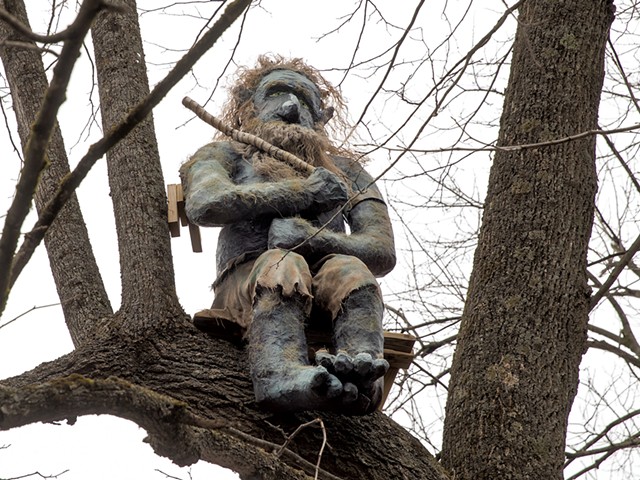 One busy weekend called for an outing that would fit into a 90-minute window. My friend Kathy had posted photos of a walk in Shelburne involving a troll, and I needed no further encouragement.

Shelburne's LaPlatte Nature Park covers about 145 acres and includes community gardens off LaPlatte Circle, where many people park to walk on the interconnected looped trails. The closest access to the troll is to park behind the Shelburne Market and enter at the sign. Walk down the hill and bear left to reach the gently undulating suspension bridge and search for the troll. (Part of the fun is finding the creature, so I won't give too much detail — but the full-size figure is perched where you might not expect.)

Shelburne Parks & Recreation staffers cannot confirm how the troll came to reside here; he seems to have arrived within the past year. "Town officials will leave him alone as long as he behaves," director Betsy Cieplicki said with a laugh.

You can make the walk as long or as short as you want, looping through the woods and down by the river. As the weather warms, it'd be lovely to stop for a picnic at the table and stools on the near side of the bridge. 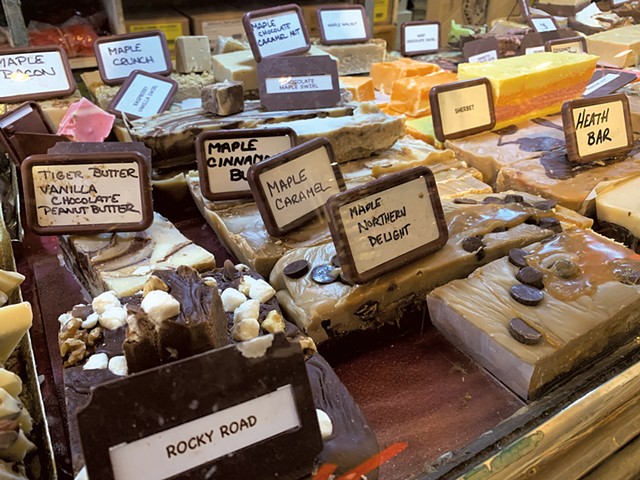 Other charms along the way include an arch of vines woven together over the pathway and a sweet garden gate where one of the trail spurs ends at the road. There's even a history lesson about Ira Allen's saw and gristmills, which date back to the late 1700s.

With history on our minds, we stopped at the Shelburne Country Store before heading home. The building has housed a general store for more than a century and is known for its warren of rooms and wide assortment of candy, including throwbacks such as chocolate bull's-eyes and Tart N Tinys.

But I was there for the fudge. It's made fresh daily by co-owner Deb Mayfield. She told me that at least 20 flavors are on offer at any time, from among 200 total. I acquired two small chunks: Maple Northern Delight, which layers chocolate and maple fudge with caramel and peanut butter cups to great effect; and Tiger Fluff, made with chocolate and divinity fudges and a peanut butter ribbon. Creemees return in April, Mayfield said. Those are old-school, too: maple, chocolate or a swirl. 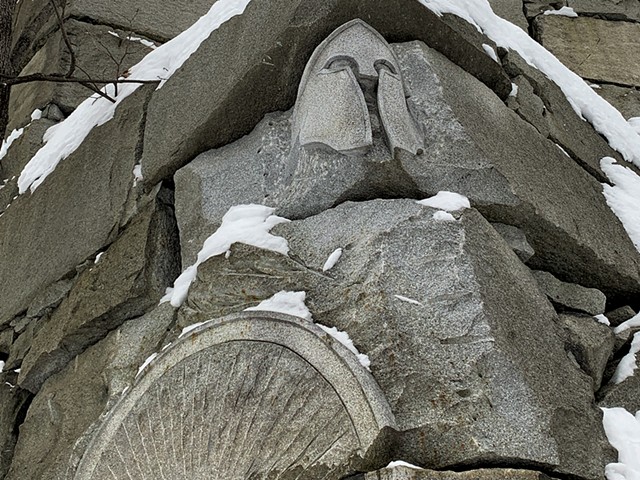 "No one likes to explore on an empty stomach," proclaimed a sign in the window of South Barre's Citgo gas station, which houses Rickie's Indian Restaurant.

We were headed to explore the granite quarries of Barre and Websterville and planned to grab some finger foods, such as vegetable pakoras, from Rickie's. But I learned later from co-owner Gary Singh that the menu has been streamlined for lack of help. His wife, Kelly, is the cook and also took our order.

Gary recommends calling ahead. We had not, so we snacked on a trio of satisfying deviled egg halves while waiting about 10 minutes.

The restaurant is currently takeout only, so we ate in our car amid steamy wafts of cumin and curry. Our saag paneer was topped with the softest cubes of freshly made paneer I have ever had, and the aloo chole was chunky with chickpeas and potatoes in a crimson, warmly spiced chile-tomato sauce. Both came with perfectly fluffy rice, as naan is also off the menu right now.

If sandwiches are more your thing, head to downtown Barre to check out the creative menu of grilled cheese options at the Meltdown or grab a very good sandwich from the case at AR Market. (Note that both Rickie's and AR are closed on Sunday.)

Well fed, we headed to Millstone Trails. We parked on Barclay Quarry Road toward the south end of the trail system and walked a loose four-mile loop, meandering through woods of birch, relics of the industrial past, and striking crags and piles of granite. Along the way, signs explaining the history of the quarries and those who worked there brought the past to life.

Eventually, we crossed Church Hill Road and arrived at the start of the path to Grand Lookout, marked by a pair of nascent columns emerging half-carved out of granite blocks. (To get to the lookout more quickly, park at the Brook Street lot in Websterville.)

The roughly half-mile approach to the Grand Lookout is rich with stunning views, informative signage, and engaging carvings and statues. One wall of granite blocks boasts a pair of owls, a dinosaur, a gladiator helmet and more. Four Ionic columns soar around a statue of Hephaestus, son of Zeus and Hera. He was, it turns out, the god of stone masonry. A bit of Greek mythology, for sure, but far from the River Styx.