A Tour of Québec Cheese 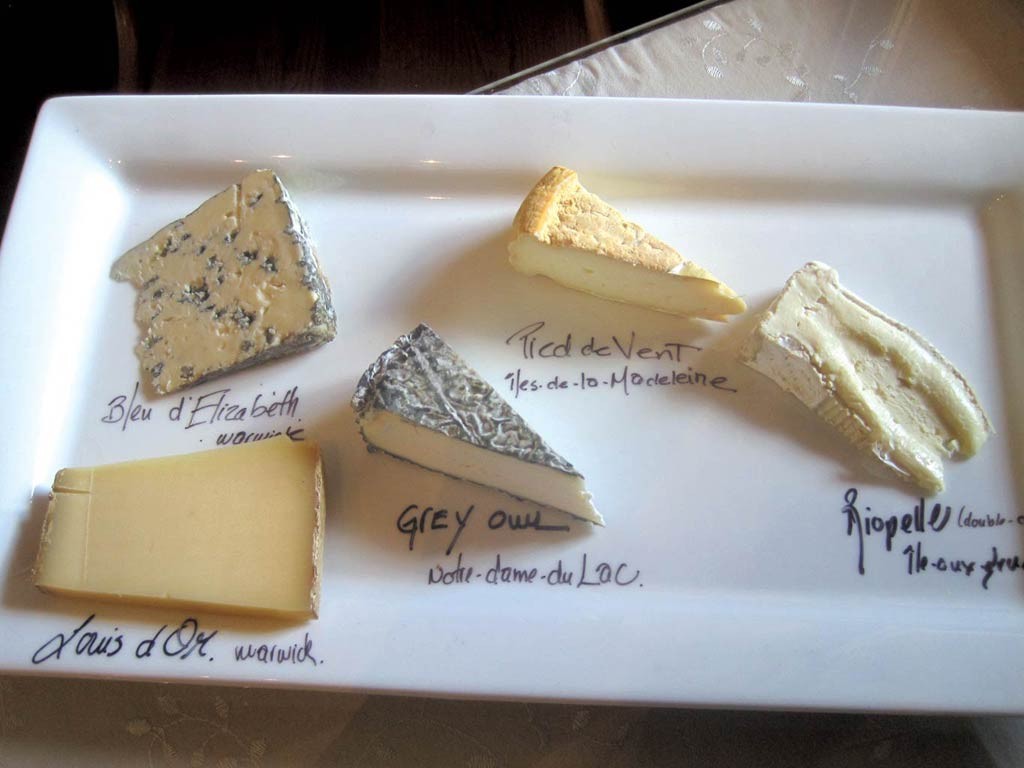 Working the counter at his gourmet store La Rumeur Affamée ("famished gossip") in Dunham, Québec, Yves Nadon has noticed a troubling trend among customers. "All the people want cheese without lactose and without fat," he said. "You don't want cheese. You want plastic!"

Nadon doesn't bend to such dietary whims: He's too proud of the local treasures he sells. Customers at his shop (another, now-unrelated Rumeur Affamée serves the more eastern population of Sutton) include locals and tourists traveling the Route 202 branch of the Québec Route des Vins.

Yet, said the cheese expert, few of those shoppers are Vermonters.

Why? It goes without saying that Vermont doesn't lack for fine cheese — or for loyalty to its own producers. But locavores in the northern part of the state might want to consider that many southern Québec farms provide cheeses with fewer food miles attached to them than favorite "local" cheeses such as Maplebrook Fine Cheese and Consider Bardwell Farm (crafted in Bennington and West Pawlet, respectively). Are Vermonters cheese xenophobes?

Nadon thinks confusion about border-crossing rules may be the more significant factor in discouraging Americans from bringing curds home, particularly raw-milk cheeses. In reality, according to the U.S. Customs and Border Patrol Office at Highgate Springs, no cheeses are prohibited from crossing the border for personal use.

Québec isn't just Vermont's neighbor to the north but a second North American dairy capital. While Vermont hosts more cheesemakers than any other state in the Union, La Belle Province is home to more than 100 producers. Nadon estimates they make more than 550 varieties, which account for roughly 70 percent of Canadian cheeses. But, while Vermonters who cross the border for dinner may taste the Bleu Bénédictin made by monks in Saint-Benoît-du-Lac or a local mozzarella, most of us are woefully ill-informed about the award-winning cheeses available minutes from the border.

When Seven Days visited Dunham last week, Nadon gave us an edible tour. He couldn't offer the sought-after 4- and 6-year-old cheddars from Fromagerie Île-aux-Grues — he's sold out of those until next year. However, he had a stock of 2-year-old cheddar from the same producer, which he described as "more like a 3-year" in its complexity and deep, hazelnut undertones. 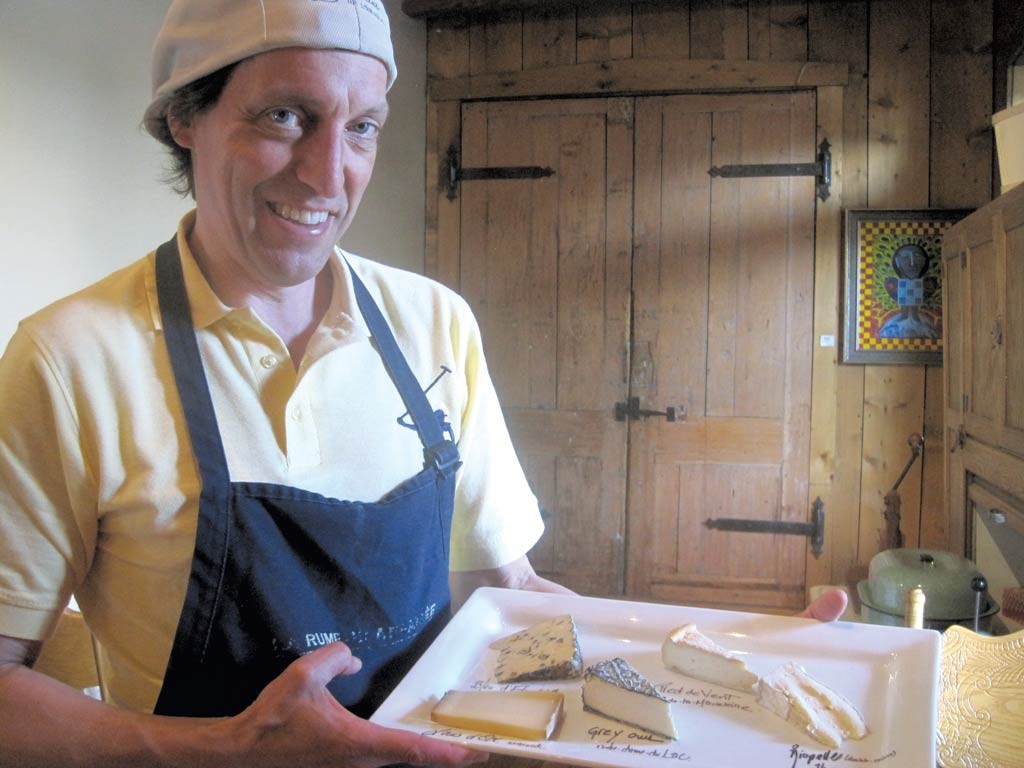 Nadon was also fresh out of Brebichon from Les Fromages du Verger of Saint-Joseph-du-Lac. The farm's name means "cheeses of the orchard," and the soft sheep's-milk fromage boasts a rind washed by cider, so the whole concoction melts with a sweet whisper of apple.

To educate Vermonters about a few cheeses worth trying, Nadon sliced up five of his favorites in a variety of categories. All are strongly distinct from Vermont classics, and merit bringing home for an evening of experimentation.

Still nervous about being arrested as an international smuggler? Eat your creamy acquisitions in Dunham, along with a local ice cider or rosé, at one of the many wineries and orchards lining Route 202. Few things are better than a Euro-inflected wine-and-cheese picnic about an hour from home.

Do you love Vermont Creamery's Bonne Bouche? Meet Le Riopelle de l'Isle. Both cheeses are double creams, meaning that extra cream is added before the milk forms into curds. The result is a high butterfat content that makes these cheeses exceptionally creamy.

Granted, Le Riopelle has a lot of food miles on it as Québec cheeses go: Isle-aux-Grues ("island of cranes") is north of Québec City, a speck on the St. Lawrence River. The cheese is named for Jean-Paul Riopelle, an abstract painter who spent his final years on the isolated island. His namesake cheese was released just months before his death in 2002.

No abstraction is necessary to describe this cheese. A bite is akin to ultra-rich butter as it melts in your mouth. A kick of hay and barnyard tastes distinguishes the bloomy-rind delicacy, made with unpasteurized cow's milk. Nadon isn't the only one who treasures the Riopelle: It has won Best Soft Cheese at the Canadian Cheese Grand Prix and has scored multiple press and crowd-favorite awards from the province-wide Sélection Caseus, Québec Fine Cheese Competition.

Nadon said this soft, ash-rind goat cheese from the Bas-Saint-Laurent region can be sensitive to temperature. Twenty minutes at room temp don't suffice for the cheese's triple textural layers to reveal themselves, yet it liquefies after much more than an hour outside the fridge.

When the cheese is eaten at prime time, a claylike rind gives way to a soft second layer and a melting center. Tasters who find goat cheese too tangy or "goaty" in flavor may enjoy mild Grey Owl. The nip of acid is tempered by an exceptionally round, full flavor with a lingering, creamy sweetness.

Nadon is particularly fond of the starkly gray-and-white cheese's moniker. It's named for Brit Archie Belaney, who adopted the Ojibwe word for "Grey Owl" as his name when he began spreading the tribe's conservationist message throughout Canada in the early 20th century.

Grey Owl himself would be pleased with Fromagerie Le Détour's care for its Saanen goats. These vegetarian cheeses are produced without animal rennet, meaning the stomach byproduct doesn't need to be harvested from the happy herd.

It would be easy to prank a foodie friend by serving up a slice of Pied-de-Vent and telling him or her it's cheesecake. The eye will spot few differences between the soft, white cheese with its rusty rind and the baked dessert. Your friend might miss the sweetness at first, but the crusty Brie relative will be sure to please once the shock wears off.

Pied-de-Vent is produced in the remote Magdalen Islands in the Gulf of St. Lawrence with the milk of a single herd of cows. They're fed only local hay, said to have a unique terroir. The result is a nutty flavor with an almost chewy, taffy-like paste. The crumbly mixed rind has an oaky, ashen quality that yields in the end to a butterfat aftertaste.

The cheese's name translates to "foot of the wind," Acadian slang for the spectacle of sunrays breaking through clouds. To light up the flavor, Nadon recommends enjoying the Pied-de-Vent with honey or maple syrup. "Something sweet," he says.

To francophones, Louis d'Or refers to the gold coins that debuted during the 17th-century reign of Louis XIII. But this hard cheese is worth its weight in gold: It has won an unprecedented slew of awards in both Canada and the U.S. Besides raking in prizes at the Sélection Caseus, in 2011 the Louis d'Or won best in show at the Canadian Cheese Grand Prix and third place at the American Cheese Society Competition.

The milk for this organic, raw-milk cheese comes from the Ferme Louis d'Or, the real source of its name. The cheese is produced at a factory based in a parochial house in the small town of Sainte-Élizabeth de Warwick, between Drummondville and Victoriaville. Nadon said that every other Friday, the cheesemakers ring the bell of the church next door to gather townspeople to try the latest cheeses and give feedback. "It's very dynamic. That's why the cheese is very, very good," he said. "There's nothing like it."

That much is true. Slightly greasy in texture, Louis offers a meaty taste at first bite. Nadon called it "a long cheese," referring to its slow build of flavors. Flesh-like savors give way to nuttiness. The cheese lingers on the palate with a wash of umami simplicity — hard to describe, but dangerously easy to eat.

At the risk of repeating himself, Nadon couldn't resist choosing another specialty from Fromagerie du Presbytère for his final suggestion. He chose well.

Vermont is home to a few excellent blue cheeses. (Has anyone not fallen in love with Jasper Hill Farm's Bayley Hazen Blue at first bite?) But Bleu d'Élizabeth bears little resemblance to any of them. First there's its initial smack of salt. The salinity only serves to amplify the cheese's uncommonly creamy texture and its subdued bloom of pungency. With more moisture than your average blue, it has no crumbly chalkiness, just a buttery crescendo of grass flavors. The blue mold is the same one used in Stilton, imported from England. Élizabeth is sharp, but not overwhelming, even to a blue-cheese noob.

Worth a hop across the border? Absolutely.

The original print version of this article was headlined "Québec Curds"