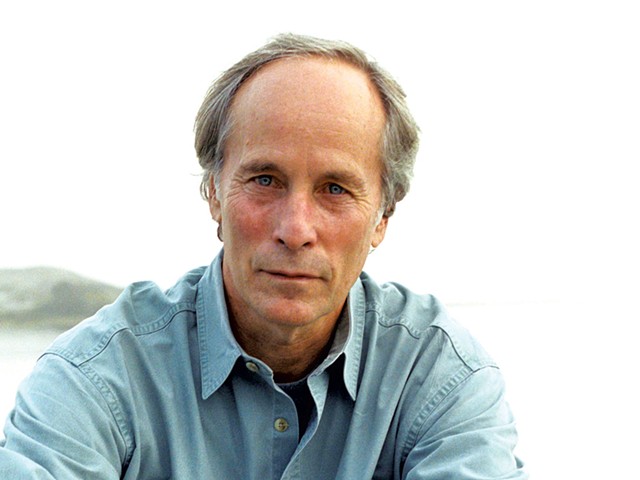 Ever since the publication of his novel The Sportswriter in 1986, Richard Ford has been widely recognized as one of America's leading writers. That reputation was cemented forever when Independence Day became, in 1995, the first novel to win both the Pulitzer Prize and the PEN/Faulkner Award. He is the author of more than 13 books, including his debut memoir, Between Them: Remembering My Parents, coming in May.

On Friday, February 24, at an event that will be a fundraiser for the Burlington Book Festival, Ford will make his first Vermont appearance and read from the new book, after which I will interview him onstage. We caught up recently by email in a preview of that conversation.

SEVEN DAYS: Since I am a novelist and not a journalist, I can say that I have been a huge fan of yours for a long time, and your fiction has had a great influence on my own work. I still remember when I was an undergraduate bashfully taking my steps toward becoming a writer, one of my professors pressing a copy of Rock Springs into my hands after a class and saying to me, "Read this. This is as close to perfection as stories can come." And he was right. Now, after decades of producing some of the most important fiction in America, you are publishing a memoir. Why this book now? And why the memoir form?

RICHARD FORD: As you know, "why" is always a difficult question when it comes to accounting for the origins of some piece of writing. [Umberto] Eco, in his Paris Review interview, said that "those things we cannot theorize about, we must narrate." So, regarding "why" a memoir, there was never a thought of any other form. I didn't choose against using the material as a story or a novel. Of course I did choose, but it wasn't a choice of not doing something, but of doing something.

I wrote a lecture last autumn in which I tried to account for this question. Naturally, retrospect makes everything clearer (and probably corrupts the truth as much as revealing it). In the lecture, I wrote that my parents were such "small" people that it seemed to me their actuality could only be represented by the facts. As if they stretched plausibility as resourceful subject. And as though the machinery of a novel, and the effort required to establish that initial plausibility, were just too ponderous and given to misrepresentations. I do kinda believe that (though it may also not be at all true).

The form these two memoirs take — their dictions, their arcs, their details, their intellectual destinations — all these do seem to me commensurate with who my sweet parents were. Put differently, fiction inevitably entails some kind of irony or other. I didn't want irony. I wanted level-sighted sincerity. Because ultimately I also wrote two memoirs of my parents because I loved them and missed them — miss them to this moment.

SD: You are probably most renowned for creating one of the great indelible characters in modern American fiction in Frank Bascombe. Many writers I know — myself included — can barely look at our past work once it is finished and we are done doing public readings from it. Did you know when you finished The Sportswriter that you would return again and again to Frank?

RF: I did not know that. The Sportswriter was the third novel I'd written — after two books nobody'd much bothered to read. When I wrote it, I was concentrating hard on that book and that book only — because my agent had advised me that if The Sportswriter wasn't a success with readers, I was "toast." Her word. Very attention-grabbing. Up to and even beyond then, I was a writer who wrote "one book, then one book, then one book." A grander scheme than that had never occurred to me and seemed more ambitious than I was.

I only, in a way, "backed" into writing a connected book — which became Independence Day. Again, I wanted to write a single novel, this one about a man who takes his teenage son to the Baseball Hall of Fame. Only, when I began collecting notes for this novel, all my notes were in Frank Bascombe's voice. And even though I warred with myself, trying to squelch such an impulse, which seemed potentially disastrous to me and overreaching, I finally realized that knowing in advance how a book would sound, who would tell it, where its locales and concerns were, and — importantly — knowing where a cohort of readers might be found, I just decided I was looking a gift horse in the mouth, and only nitwits did that.

SD: One of the things that sets you apart from other major writers of our time is that you are hard to pigeonhole. I suppose [John] Updike might be a comparison, in that you are both adept in the short form and the small moments, and in the big, sweeping themes that some of your larger novels capture. You're also equally at home on the vast plains of Montana and in the confined suburbs of New Jersey. I'm curious about your decision tree when you sit down to write. Do you start with form — this is going to be a short story or a novel — and then move to place? Or do characters determine the rest?

RF: I've always kept a notebook, and generally it's from these — now many — notebooks that pretty much everything I write originates. I just trust that if I go looking for something to write, I'll find it there. However, the decision to choose a form — a novel or a novella or a short story — seems unrelated to subject matter or topic or theme or raw material. I simply choose the form for which I feel I have adequate strength. A novel always starts as a novel (because I've judged myself capable). Likewise [with] other forms. For me, who, after all, is doing the actual writing, characters don't determine anything. I determine everything. Characters, as do all the other formal aspects of what I write — they all do what I tell them to.

SD: I am writing you from Washington, D.C., where 15,000 writers are attending the Association of Writers and Writing Programs conference. The mood is a little surreal, and the running joke is that we should enjoy this one since, six months from now, this might be an illegal gathering. Do you have thoughts on the role of fiction writers in the age of Trump? Or are our jobs the same as they've always been?

RF: To let "the age of Trump" — which, who knows, could be blessedly brief and even end abruptly — offer any more than the same kind of raw material that public life always provides ... is to concede far too much of one's sovereignty. Some people will write about Trump; others will scarcely even register him. His advent does not change the basic artistic freedom that Henry James referred to when he wrote that the terrible whole of art is free selection. We choose what we write. Donald Trump matters to what I write about as much as Donald Duck.

Between Them: Remembering My Parents by Richard Ford, Ecco, 192 pages. $25.99. Ford will read from his memoir and participate in a question-and-answer session with Thomas Christopher Greene on Friday, February 24, 7:30 p.m., at the Silver Maple Ballroom, Davis Center, University of Vermont, in Burlington. $35 advance; $40 at the door; benefit for the Burlington Book Festival. burlingtonbookfestival.com

The original print version of this article was headlined "Pulitzer Winner Richard Ford Talks About Memoir, Characters and Trump"

Books Richard Ford Between Them: Remembering My Parents