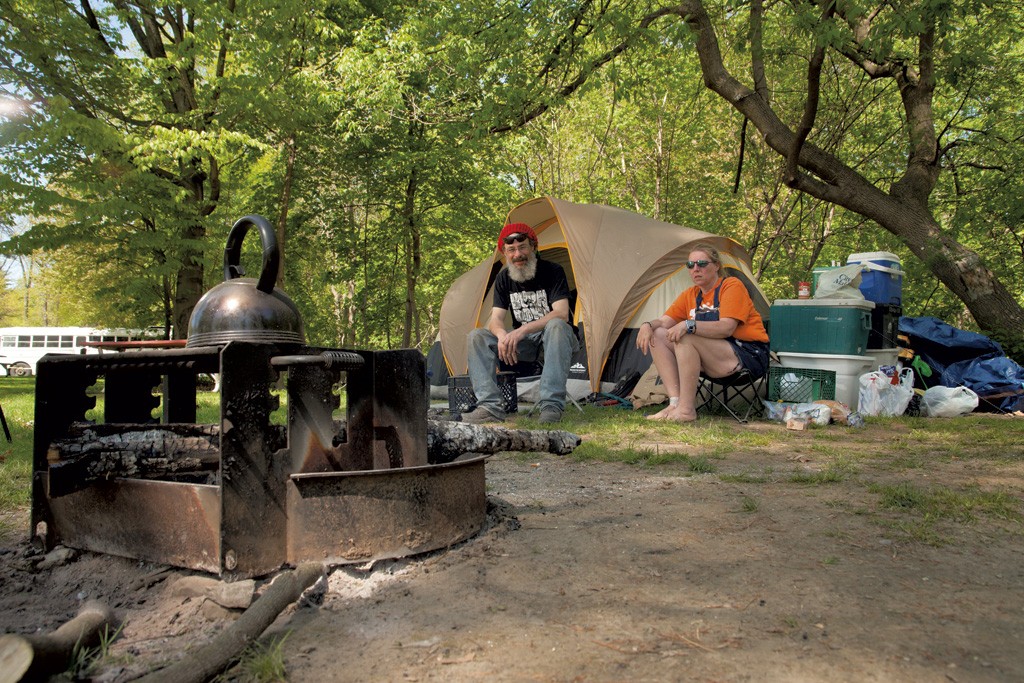 Used plastic silverware soaked in water in a Styrofoam cup on a picnic table next to a loaf of white bread. Soggy T-shirts hung from a rope strung between two trees. Branches smoldered in a campfire ring. Inside a handful of large tents, sleeping bags and cans of Natural Light were visible.

It looked like Matt Sweet, his girlfriend, Renee Drew and other members of their "street family" had been living for weeks in a remote corner of Burlington's North Beach Campground.

But it was just days earlier they were uprooted from their tents in one of Burlington's longest-operating homeless encampments, in the woods off Pine Street, because another resident had been found dead under suspicious circumstances.

Burlington officials scattered the dozen or so people who had come, over weeks and months, to see themselves as part of a community.

"Many are in shock — these were their homes," said Matt Young, a member of the HowardCenter's Street Outreach Team. "We thought of this like a tornado has hit an area and many people have been displaced. What happens then? You have FEMA, the Red Cross. But this is not that kind of situation."

Their predicament draws attention to encampments around the city, where homeless residents live hidden from view in patches of urban forest — off the Burlington Bike Path, in the Intervale and elsewhere. Authorities typically look the other way unless they are compelled to act, and many of these small, off-the-grid communities have existed for years; some are occupied year-round.

A number of the residents suffer from addiction or mental illness and are either unable, or unwilling, to succeed in social-service programs available to them.

After authorities broke up the Pine Street encampment, residents received bus passes and met with officials from the Agency of Human Services to see if they would qualify for long-term housing. They were told they could pitch tents for three days at the North Beach Campground. But as the final hours of that arrangement ticked down, none knew where he or she would be living.

"Our refuge no longer exists," said Sweet, who had lived at the encampment for most of the past two years. "That's the huge question — where? And are we going to get harassed there?"

The Pine Street encampment, social workers say, had a reputation as the most hospitable in the city, and sometimes held 20 or so people in a cluster of tents and crates about 70 yards into the woods near Burlington Electric. With the help of other campers, one or two wheelchair-bound people have even lived there in the past.

"They have been particularly social," Young said. "Lot of friends, would meet people at the food shelves, Salvation Army, City Hall Park, and if someone seemed lost, they would say, 'Come down to Pine Street, we'll take care of you.'"

All of that changed on May 17, when a recent arrival was found dead in another man's tent. Someone called the police — many of the residents have cellphones — and they found 40-year-old Forrest Bryant on property that belonged to Mark Delude, the man whom inhabitants describe as the community's founder and leader.

Delude told police he hit Bryant once in the forehead in self-defense after Bryant broke into his tent, according to court documents.

"Had to do what I had to do," Delude told police, according to a police affidavit.

No one has been charged in connection with Bryant's death. Delude was initially arrested on an outstanding trespassing warrant, and was then charged with obstruction of justice in the Bryant case for, court records allege, trying to dissuade campers from calling police. He was in jail on $10,000 bail.

The recent inhabitants say Delude, whom they knew as "Marky," was largely responsible for the welcoming atmosphere on Pine Street, inviting people in when they had no place else to go. They say Delude lived at the camp for most of the past five or so years.

"It was Marky's spot," said Sweet. "You don't get to come in unless you're invited in."

Deborah Ballard lost her apartment a couple months ago while unemployed.

"I didn't know who else to turn to," Ballard said, adding she has struggled with alcohol addiction. "I didn't even have a tent. With Marky, I just knew it was safe. He said, 'Come on down, I got an extra bunk.'"

But the campers said that Delude could be volatile, especially when drinking, and sometimes threatened to banish people for no reason. He was arrested more than 70 times, according to court records, mostly for misdemeanors.

Bryant was less well known, having arrived in the camp only several weeks ago. Police say that he had previously spent time in New York and southern Vermont.

Neither Burlington police nor social workers monitor encampments closely. Some pop up in the spring, while others, such as the Pine Street camp, serve as year-round homes.

Authorities know the tent campers either don't have a better alternative or refuse help, figuring they are better off with each other.

A survey conducted by the Vermont Coalition to End Homelessness identified 1,556 homeless people in the state last January, up 9 percent from the year before. A majority of those are thought to be in the Burlington area.

"Homeless encampments are the product of limited affordable housing options," Young said. "We can't give people keys to an apartment. We don't have that in the community."

And the demand for temporary shelter outstrips the local supply.

For example, Burlington's largest homeless service provider, the Committee on Temporary Shelter, provides temporary stays for 36 single adults and 15 families, but their shelters are almost always at capacity. COTS also has rules about conduct in the shelters that many homeless people either cannot or won't follow. It requires participants to save a large chunk of their income, for example, and drinking is not allowed.

Some of the campers, such as Sweet, say they simply prefer to be in the woods.

"You generally find that the folks in these encampments have either tried these services and been discharged as a result of bad behavior, or are choosing not to engage in those services and camp," said Burlington Police Chief Michael Schirling.

City officials shut down encampments only when a landowner complains.

Coincidentally, just days before Bryant died, Environmental Protection Agency workers checking in on the nearby Pine Street Barge Canal Superfund site came across the encampment and complained to the city, forcing the police department's hand.

But the police were determined to give the inhabitants plenty of time to find new homes. The day before Bryant was found dead, police officers and social workers visited the encampment and informed the people there that they would have to close it in two weeks. Police and various social service workers tried to plan how they would help each person. Bryant's death short-circuited those plans by precipitating an immediate evacuation.

The North Beach Campground, sandwiched between Burlington High School and Lake Champlain, allowed the Pine Street crew to stay — but only temporarily; sites had been booked for Memorial Day weekend.

As their last day there wound down and a relentless rain soaked their tents, the campers learned that they would not all be staying together.

Two of them, Drew and a deaf teenager named Devon Hallstrom, had been accepted into a short-term housing program in Shelburne, where they could bunk for as long as a week.

Social workers pulled up in a van and a pickup to take the two away. As they were about to leave, Drew jumped out of the van and walked up to Sweet.

"At least give me a kiss goodbye," she said, planting one on his lips.

Ballard had vanished some time in the past 12 hours. Rumor around the campground was that she was crashing with a friend in Williston, though no one knew for sure.

For the rest of the group, there were no long-term solutions.

Sweet and a young couple, Kim Guertin and Ben Sawyer, decided to head back into the woods to a new spot, tucked into a ravine, where they hoped not be noticed.

Jack Hendrix kneeled on the ground and methodically rolled his tent into ever-smaller squares, as he has done hundreds of times before.

Sweet was urging Hendrix to come back into the woods with them, but Hendrix wasn't so sure. Maybe he would find a place of his own to sleep, Hendrix mused, on pavement, closer to downtown.

He said softly, "I don't want to go to a bad situation."