A Summer Evening of Fiddling and Talking Socks 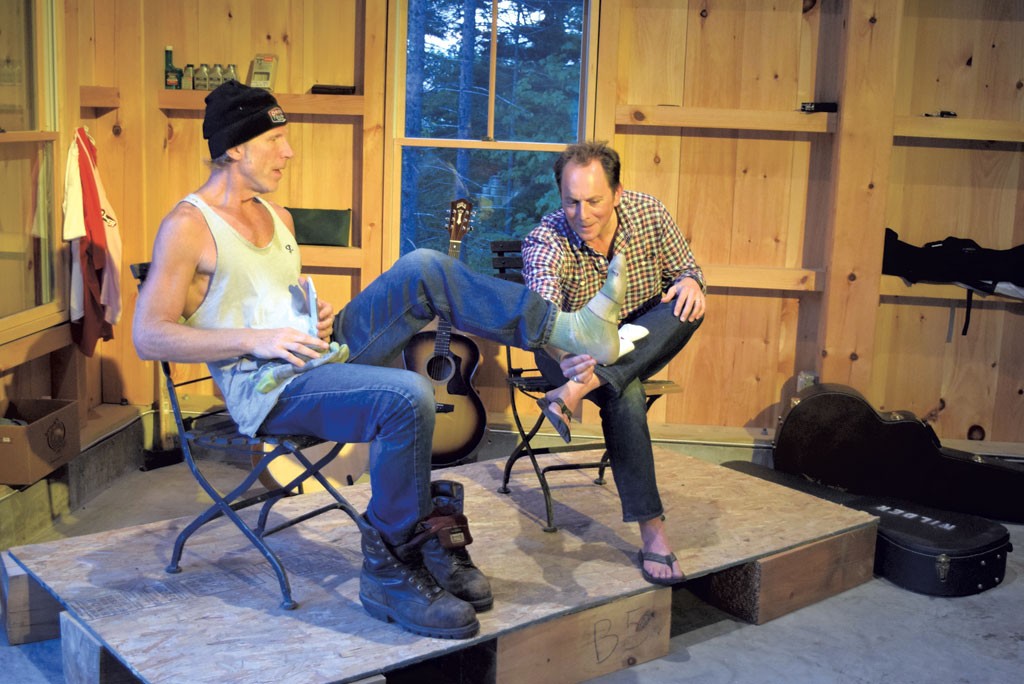 Rusty DeWees was waiting to greet his guests as they drove up the long dirt road to the driveway of his home on the Worcester Ridge in Elmore, above Stowe. The setting sun added streaks of orange and red to a sweeping view of Mount Mansfield and points west.

His email invitation to this "barn talk" — his third — was sufficiently odd and intriguing to compel about 50 guests to make the trek last Thursday night for music, cider, doughnuts and samples of Caledonia Spirits.

The main event? DeWees — who's made a name for himself as a comedian and actor known as "The Logger" — would be chatting up Ric Cabot, president of Northfield-based Cabot Hosiery Mills, the company that manufactures popular, durable Darn Tough socks.

The guest list was no less eclectic than the evening's lineup. It included people DeWees has known for years and some he'd just met, young and old. He lamented the cart collector at the local Hannaford supermarket couldn't make it.

Ever the detail-oriented host in jeans, boots and a tank top, DeWees warned his guests to visit the facilities in his house before setting out for the barn. En route, he described the evenings as experimental. Previous interview subjects have included former governor Jim Douglas and state chief medical examiner Steven Shapiro. Maybe he could sell the concept to Vermont PBS, he mused, though he noted he'd probably have to line up sponsors. Or maybe he could just record the shows and post them on the internet.

DeWees' barn looks and smells as though it was erected yesterday. With butter-colored beams, a spotless cement floor and not a single cobweb in sight, it has "flatlander" written all over it — great fodder for a Logger joke.

DeWees, who was born in Philadelphia but grew up in Stowe, makes his living playing the part of a redneck logger dressed in ragged tank top, torn jeans and well-worn shitkickers. But in real life, the 54-year-old studied acting in New York and is a neatnik who likes to talk politics and the issues of the day. DeWees, who flirted briefly a few years ago with running for Congress, follows the news closely. At his May barn talk, Republican Lt. Gov. Phil Scott was a guest. From the stage, DeWees urged him to run for governor.

DeWees told last Thursday's audience he'd be doing more traditional music and comedy variety shows next winter in Stowe, and he expects Douglas to participate in one of them. "I'm going to make Jim Douglas sing and shit like that," he promised.

This show started the same way DeWees begins many of his Logger routines — with music. On a stage made of plywood and wooden blocks, he played guitar with his regular bandmates, fiddler Patrick Ross and guitarist Peter Wilder. "This is in honor of them guys who escaped from Dannemora," DeWees said in his best Vermont brogue, as the trio launched into Merle Haggard's "Sing Me Back Home," a song about an inmate.

Next, he welcomed Jamie Lee Thurston to the stage for a few numbers. The Nashville country music singer grew up in Waterbury and happened to be in town.

Then DeWees turned to the real meat of the show: talking about stuff that happens to intrigue him.

He prompted Dave Merriam, a neighbor, to describe the new zipline at Stowe Mountain Resort. He got Jim Munsie, an avid cyclist he knows from the gym, to talk about how Lance Armstrong was doping to keep up with other doping cyclists.

All of that was just a warm-up for the featured talk. DeWees pitched this portion of the show as "Seat 8-B," so named, he said, because he envisioned two aisle-seat passengers on a plane having this kind of chat.

As Cabot Hosiery Mills' Ric Cabot sat in a folding chair across the proverbial aisle, DeWees observed, "The sock guy's got no socks on." Cabot was wearing flip-flops.

DeWees was one of the few people in the barn wearing socks on that steamy summer night. Of course, they were Darn Tough. Hauling his foot out for Cabot to inspect, he bragged that they were still going strong after more than a decade.

"How in the heck do you come up with this Darn Tough thing?" DeWees asked.

"I had to do it," Cabot responded. He explained that the Cabot Hosiery Mills, which his father began in 1978, had been making brands of socks for other companies. Then most of those companies shifted to manufacturers overseas. The company shrunk to 35 employees and was running just three days a week, he said.

"We came as close to going out of business as a business could go," Cabot said. "It was a bad scene."

He started the Darn Tough brand in 2003. Against all economic predictions, Cabot found that the public really did want tough, guaranteed-for-life socks that are made in the U.S. Today, the company employs 200 and Cabot has plans to increase the workforce to 500.

Cabot indicated that expanding the plant in Vermont isn't easy, and DeWees took the opportunity to bring up politics. What, DeWees asked, does he think of the $15-an-hour minimum wage proposed by presidential hopeful Sen. Bernie Sanders (I-Vt.)?

DeWees asked Cabot for words of inspiration. "So many people don't do things because they see the enormity. They just don't start," Cabot offered. "Starting, to me, is more than 50 percent of achieving."

His interviewer, who brought a bunch of people together on a summer night to sit around a barn, listen to the fiddle, sip cider and talk about Lance Armstrong, ziplines and socks, couldn't have scripted a better acknowledgement.