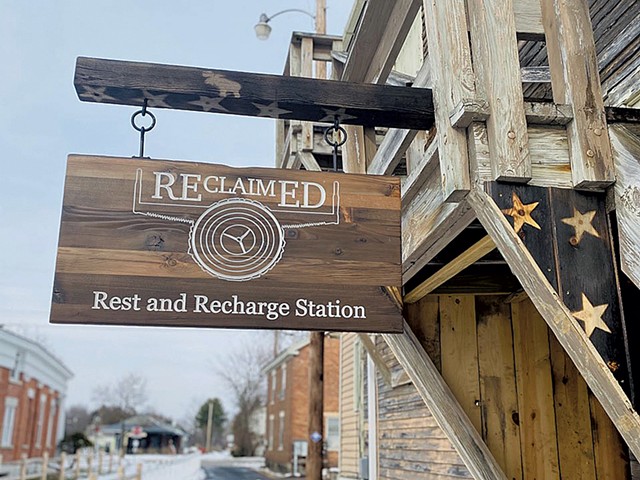 After months of watching the coronavirus pandemic squeeze the life out of downtown Poultney, Carl Diethelm and Danny Lang decided to enliven their community.

The young men were well set up to do so: They cofounded and run REclaimED, a nonprofit maker space and community hub full of equipment and tools.

Diethelm found inspiration at a workshop hosted by AARP Vermont last October, then applied for a $3,000 "placemaking" grant from the organization. He and Lang proposed creating a "rest and recharge station" outside of their building at 169 Main Street, which sits just off the popular D&H Rail Trail.

Their proposal was one of three the AARP chose for its "focus on creating public spaces and streets that are safe and accessible for everyone," the organization said last month.

Lang used reclaimed tongue-and-groove pine to create a small covered area with a counter. He employed a Japanese preservation technique known as shou sugi ban to torch star shapes into the wood. A sign made of reclaimed redwood hangs above the structure.

From about 10 a.m. to 5 p.m. on Fridays, Saturdays and Sundays, the men will offer passersby free coffee, tea and hot chocolate, plus a place to rest. There's a picnic table and a small firepit.

The trail is well used year-round, and skiers, snowshoers and snowmobilers cruise by in the winter. Though few people stopped by during a soft opening over the weekend, Lang said he and Diethelm expect things to pick up as word spreads.

The makers have plans to offer art, live music and local information. Such an outdoor community space is key during the pandemic, Lang said, and still will be important when social distancing is a thing of the past.

"It's a pretty lively place," Lang said. "We're hoping to bring some people in and offer something to them that hopefully will be enjoyed by many."