Jennifer Doyle operates the small, homelike eldercare facility in Chelsea that her parents owned before her. A self-described "drill sergeant" about COVID-19 precautions, Doyle nearly made it through 2020 without a case, until the last batch of twice-weekly test results came back on the evening of December 30. This time, of the home's 20 residents and 20 or so staff, one person's test came back positive: hers.

Only time could tell whether Doyle had unknowingly seeded an outbreak. In the interim, the home would need to undertake new, even stricter measures to limit any spread. Employees would need to calm anxious residents while donning unfamiliar layers of personal protective equipment. And they would have to keep the home functioning without the physical presence of either the home's owner or its coadministrator, who had been ordered to quarantine as Doyle's close contact.

Vermont officials understood what was at stake. In their first virtual meeting with Doyle on the evening of her positive test, they developed a plan to manage the situation. Crucially, the state also lent a literal helping hand in the form of a licensed practical nurse who reported for duty the next morning.

Backup staffers have been in desperately short supply for eldercare homes stricken by the coronavirus, which together account for 60 percent of COVID-19 deaths in Vermont. As each outbreak unfolds, homes suddenly lose employees to infection, quarantine or resignations, leaving them with dangerously few hands to keep residents safe and limit the virus' spread.

Conditions can and have deteriorated dramatically. Inside Elderwood at Burlington, the state's largest nursing home, patients languished in soiled bandages and undergarments, without their proper medications, following a 127-case outbreak that began around Thanksgiving, a recent federal inspection revealed.

On December 11, as a new wave of outbreaks engulfed Vermont's eldercare industry, the state launched an initiative to help minimize future catastrophes. The Department of Disabilities, Aging and Independent Living signed a $1.4 million contract with a South Burlington-based staffing agency, TLC HomeCare, to recruit a pool of emergency health care workers from around the country who can be deployed to Vermont facilities faced with a possible coronavirus outbreak.

In the six weeks since, the program has sent 55 people to 14 long-term-care homes for periods ranging from one shift to two weeks, according to DAIL. Recruiting workers has proven difficult, and so has maintaining them. These traveling workers have wrecked their cars on Vermont's icy roads and contracted COVID-19 themselves. But state officials and facility operators say the emergency pool has been a lifeline to homes in crisis.

The program's benefit hinges on its fast response. The state's contract guarantees a pool of 20 full-time health care workers who can be dispatched as needed, plus up to 20 per diem workers. TLC already supplies staff to Vermont's eldercare industry, CEO and registered nurse Mohamed Basha said, but it wasn't equipped to handle the unpredictable, short bursts of demand that appear in the first hours of facility outbreaks. Without the funding to hire a dedicated group of emergency responders, TLC often needed a week or more to send help, which is usually too late.

"There was just no way to do that without the state stepping in," he said. With the state contract in hand, TLC began recruiting health care workers in Vermont and across the country.

Before the pool was established, members of the Vermont Department of Health's rapid response team helped marshal emergency staffing for homes by calling in favors from hospitals. Those efforts had mixed results, with some hospital recruits ill prepared or unwilling to do it, as Seven Days reported last spring. As a result, facilities such as Birchwood Terrace Rehab and Healthcare in Burlington resorted to asking infected employees to work on makeshift COVID-19 units.

The state first looked to TLC last spring when it was considering establishing emergency locations to treat patients, Basha said. Those never materialized because cases waned. A post-Halloween resurgence renewed the need for staffing support at long-term-care homes. It took more than a month for the current program, modeled after a similar one in Minnesota, to come together, DAIL operations director Monica White said.

The state considered other options but found them lacking. The small number of clinicians in the Vermont National Guard already had day jobs in health care, White said, and couldn't meet the need if redirected to long-term care. Similarly, the state's volunteer Medical Reserve Corps hasn't proven nimble enough to reliably respond on a moment's notice to homes in all corners of the state.

The TLC pool, meanwhile, functions as an around-the-clock standby service in concert with the broader health department-led response. Requests for staff support come in at all hours, with employees in many cases needed the same day, said Katelynn Audette, TLC's operations manager, who coordinates the assignments. 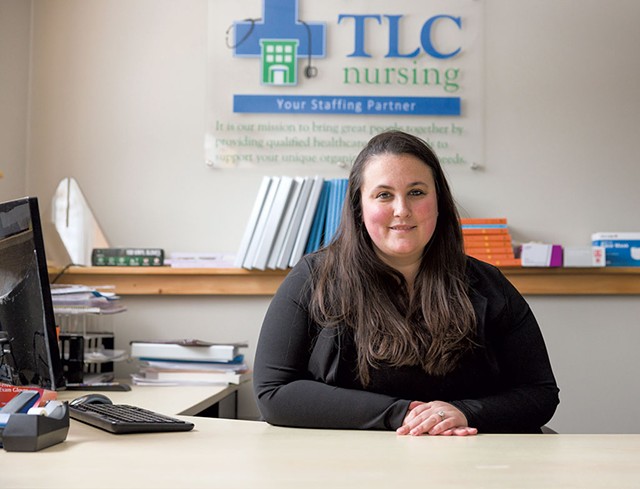 The state program seeks to entice workers with crisis wages that start at $25 per hour for unlicensed personal care assistants and go up to $55 per hour for registered nurses. The rates may be higher than what full-time workers make at Vermont's long-term-care homes, but they're relatively low for the national market in which the state is competing during the pandemic, Basha said. Registered nurses can earn upwards of $100 per hour in some other locations, which is one reason only six registered nurses have been deployed through the Vermont program so far.

"Attracting those people to Vermont, where we cannot pay that, has been a huge challenge," Basha said.

"We had a couple people that did sign up willing to work in a kitchen or do laundry and things like that," he said. "But then, when push comes to shove and you call them to go to work, [they say,] 'I'm rethinking this whole thing. I'll do it once I get my vaccination.'"

Fear of getting COVID-19 wasn't a concern for Ashlynn Pittman, a caregiver from Columbia, Miss., who has already caught the disease once. "I'm pretty used to the work," she said. "Nothing too difficult being thrown at me."

Nor was it a deal breaker for Atlanta-based Ni'Keyla Craft, a nursing assistant who is working in exposed homes for the first time as part of TLC's pool. "When I chose health care as my choice of a career, I knew I would have to deal with sicknesses, outbreaks, diseases," Craft said. "So to me, it comes with the territory."

For those reasons, the pool could quickly deplete, especially if Vermont sees another spike beyond the 19 current outbreaks in long-term-care homes. White said last week that the state was planning to email its entire database of licensed nurses and assistants in an effort to deepen the bench.

"The most dangerous thing during the outbreak for us was staffing levels." Clayton Clark tweet this

The arrival of even a couple of staffers can make a significant difference to an eldercare home dealing with COVID-19 cases. Will Fritch, a team lead for the health department's Health Care Outbreak Prevention and Response program, said those resources can help avoid the "crisis" stage of staffing strategy, in which the usual standards of care and infection control begin to break down.

The Converse Home, a nonprofit residential care home in Burlington, made use of three outside staffers over the course of its outbreak, which began December 6 and eventually infected nine residents and eight employees.

"The most dangerous thing during the outbreak for us was staffing levels," said executive director Clayton Clark.

Converse was one of a handful of facilities to make use of a Medical Reserve Corps volunteer. The home added a volunteer social worker to its memory care unit, where the outbreak was discovered. The volunteer was able to help discourage residents from wandering and further spreading the virus, Clark said.

As the outbreak entered its second week and the state launched its emergency staffing pool, Converse obtained a caregiver who could work the thinly staffed overnight shifts, as well as an assistant who came twice weekly to help conduct building-wide COVID-19 testing.

While Clark said the help was "critical," Converse also took its own measures to stem a more severe crisis. The home added an additional layer of eye protection for employees as soon as the City of Burlington detected higher traces of COVID-19 in the city's wastewater, which ultimately reduced the number of employees who had to quarantine once the outbreak was discovered. Clark also added $5 hourly hazard pay for all employees upon detection of the first cases, which helped retain anxious staff.

The home lost five residents to the virus in one unit but managed to stop it from spreading beyond that, Clark said.

The outcome at the Riverbend residential care home in Chelsea early in the New Year was even more encouraging. Owner Doyle and her coadministrator continued to work remotely, guided by advice from the state's rapid-response team, while a TLC nurse worked with the staff inside the home. Follow-up testing revealed that no one besides Doyle had gotten infected. An outbreak was averted.