In 1969, a year after Dr. Martin Luther King's assassination, Fred Rogers invited Officer Clemmons, the friendly neighborhood policeman, to dip his feet into a wading pool during an episode of "Mister Rogers' Neighborhood." The message was unmistakable: an African-American man and a white man peacefully sharing cool water and a towel at a time when many public pools in America remained segregated.

This fall, the man who played Officer Clemmons, Middlebury resident François Clemmons, makes a guest appearance on the second season of Vermont PBS's "Mister Chris and Friends." Fitting for a show released just before the holiday season, Clemmons offers Mister Chris — the moniker of Shelburne children's musician and Music for Sprouts instructor Chris Dorman — advice about appreciating the harvest holiday, then the two sing a song together. 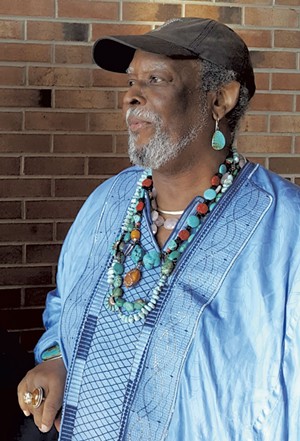 Following its well-received first season — which garnered two New England Emmy award nominations — the second season's six new episodes center around the theme "Change and Transition." For new viewers, the show mixes music, movement and natural science, with a focus on early childhood social and emotional development. Each show follows the same three-act structure. Mister Chris makes a wish that leads him on a journey, meets new friends and finishes with a big concert. Interviews with kids are sprinkled in.

"It's been proven that preschoolers will be best prepared for early education when they interact with adults and screens," said Holly Groschner, president and CEO of Vermont PBS. The TV station encourages families to watch together and is committed to creating "this opportunity to ensure there's access for everyone to great education and great skill-building that will help young people in the classroom," she added.

Shortly after filming episode five, Dorman and the show's producer and director, Holt Albee, offered their thoughts about the upcoming season.

Kids VT: Can you share a few highlights of season two?

Holt Albee: In episode three, we explore sound. One of our characters is trying to learn to whistle, and having a lot of trouble doing that. We explore that sometimes you're trying to do something, and your body won't do it. You require an adaptation. We partnered with Path of Life Sculpture Garden in Windsor, as well as [renowned children's musicians] Claudia Eliaza and Dan Zanes. This is the first time we have a neurologically diverse kiddo as one of our kiddo interviewees. He's a lot of fun, and it was really special to work with him.

Chris Dorman: He had a choice board, so he could point to the things he liked to do together. It was a really wonderful experience.

HA: Episode four is called "New Friends." A new family has moved to the farm from El Salvador, and Chris is wondering how to welcome this family and make them feel at home. We partnered with [Montpelier market garden] Ananda Gardens and Ballet Vermont.

KVT: Families seem to respond to the positivity of Mister Chris and Friends.

HA: I want to point out that Chris is really the beacon of a lot of that. His kindness and his desire to connect genuinely with kids of all ages, abilities and backgrounds really comes through. I try hard to foster that through the whole production. Sometimes, we work long days, hard days. But we try always to have fun and keep a light atmosphere around the set, so that everyone's having a good experience. Behind the scenes, everyone having that positivity and really wanting the show to succeed is a big reason why it comes across that way on camera.

KVT: What most excites you about working on the show?

CD: Our crew is so positive and so creative and collaborative that I'm having a great time doing this work. Not having ever worked in a television studio before, I still have the sense this is a unique and special place. This adventure began with Music for Sprouts classes — through that live experience with children and families. The reason I'm very passionate about taking that music and movement curriculum and building upon that in this form is that I believe public media is really important. It's a medium that is accessible to people all over.

KVT: How can parents and caregivers best support small children in their early years?

CD: If there's a fundamental challenge that I see for all kiddos going into preschool, it is developing a sense of self that is positive and feels like it's celebrated and respected in those different environments. Any opportunity to say I see you, I hear you, I appreciate you deeply for who you are, and for the things that you do, and the way that you do them is the greatest gift we can give to kiddos. It recognizes their unique abilities, and it helps them feel heard and therefore connected to you. One trusted relationship begets another. These kiddos are learning how to build those trusted relationships with kiddos their own ages. As they get older, those relationships will be colleagues and partners and their own kiddos. I would say that is still the universal challenge and opportunity.