A Simple Guide to Vermont's Evergreens 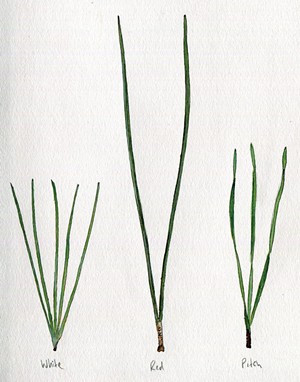 Although everyone makes a big deal about evergreens in December, I think they're just as vital in the later months of winter. They offer shelter from the wind and a welcome taste of green. February is a great time of year to get acquainted with Vermont's evergreens.

If you find yourself needing a break from the news, bring a few twigs home from a walk in the woods and invite your kids to join you at the kitchen table to figure out what they are. Even if they don't fully engage, I'm willing to bet useful tidbits will slip out of your mouth and into their ears, and they will grow up knowing that not all cones are pine cones!

To start, know that most evergreens are conifers — they grow their seeds inside cones instead of flowers. They also drop their needles little by little, rather than all at once, leaving them always green.

I think evergreens are easier to tell apart than hardwoods. The first step is not to be tricked by our society's careless use of the word "pine." With the simple awareness that most of Vermont's evergreens are not, in fact, pines, you'll open your eyes to the many varieties of evergreens in your midst.

However, if you look at the needles on an evergreen and find they come off in bunches, then you are actually are looking at a pine. In Vermont, there are three kinds of pines:

White pine is our most common pine. Its needles look feathery and occur in bunches of five. (A memory trick is that there are five letters in the word "white.")

Pitch pine is fairly rare in Vermont — it is associated with areas that have burned — and its needles come off in bunches of three. (You can remember: "Three strikes and you're out!") Sometimes you can find needles growing right out of the trunk. 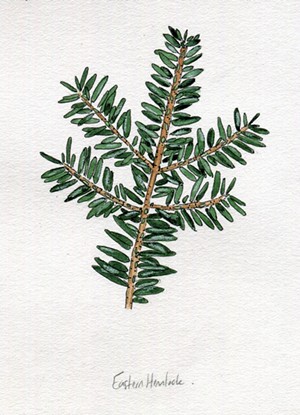 Red pine has red bark in smooth, puzzle-piece shapes, and its longer, beefier needles come off in bunches of two.

If the needles don't come off in bunches, you are looking at an evergreen that is not a pine. These are the most common non-pine evergreens you'll find in Vermont's forests:

Northern white cedar: You'll find this on cliffs and in swamps. It also can grow out of rock! Instead of needles, it has what botanists call "scale-like leaves." It also has stringy bark that looks like it's been used as a scratching post by a cat.

Eastern hemlock: This species tends to grow in groves on low-elevation northern and eastern slopes. The needles are short but so densely packed together that almost nothing can grow on the forest floor beneath them. Look for needles that lie flat like the pages of an open book, and also for upside-down needles (white stripe up) that run along each twig. 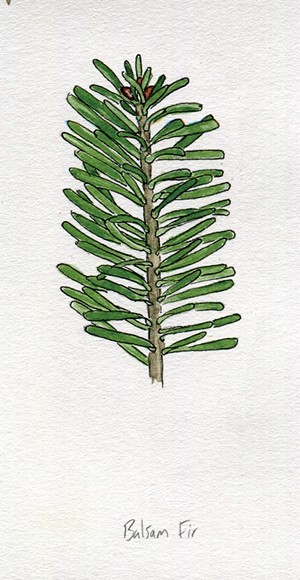 Balsam fir: These trees look a lot like hemlock, but the needles are longer and look like they attach to the stem with little suction cups, with none running parallel to the twigs. The bark is smooth, except for pods of sap (you can pop these!), and they grow in colder places than hemlocks — at higher elevations and in the Northeast Kingdom.

Spruce: We have several species of these trees, which also grow in the mountains and the Northeast Kingdom. Since they tend to grow together with firs, I remember the saying "sharp spruce, friendly fir" to distinguish the two. Firs are soft, but spruce needles are pointy and will hurt you if you squeeze a twig! You can also look at the bark, which is much rougher than fir. 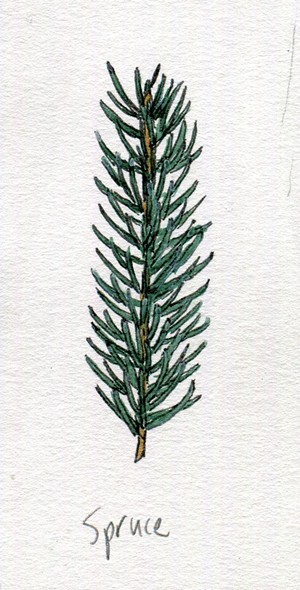 One last thing: The cones on all of these trees are just as different as the twigs, once you stop to notice. So if you catch yourself saying "pine cone," check and see if it's attached to a pine! Cedar and hemlock cones are tiny. Pine cone scales are woody; spruce cone scales are more papery. Fir cones grow upright instead of hanging down.