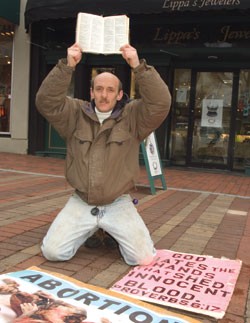 Over the years, Burlington’s Church Street Marketplace has played host to booming political rallies, parades of screeching “zombies,” a pillow fight and lots of bands.

But when street preacher William Ray Costello started shouting the gospel on the pedestrian mall on a summer Saturday in 2007, the police told him to quiet down — or else.

Costello, an auto-body mechanic from Milton who was “saved” by God after a drug conviction earned him six months behind bars, didn’t take kindly to the suggestion. Without a lawyer, Costello sued the City of Burlington and its police force in federal court for the right to evangelize at any volume.

“The gospel says lift up your voice like a trumpet,” says Costello, an Anabaptist Christian with a mischievous smile. “The whole object of freedom of speech is to be heard. If you can’t be heard, what’s the point?”

A Church Street merchant heard Costello loud and clear on June 30, 2007, and called police to complain. The shouting was audible when then-Sgt. John Lewis exited his police cruiser, a full city block from where Costello was preaching.

Lewis told Costello to lower his voice or risk being fined $200 for violating the city’s noise ordinance. Nearby restaurants were serving brunch outdoors, and the weekend shopping crowd was starting to arrive.

Costello protested and whipped out his video camera to record the ensuing confrontation, which ended when Lewis issued Costello a written warning.

Costello replied, “This is going straight to federal court.” Five weeks later, that’s where the fight ended up.

Costello’s lawsuit might seem like a legal Hail Mary. But it has dogged the city for more than two years and has reached a crucial juncture.

Last year, U.S. District Judge J. Garvan Murtha sided with the city and dismissed the case for failure to show a constitutional violation of Costello’s rights. The police weren’t telling Costello not to preach, Murtha noted in his decision — only to refrain from doing it in a way that disturbs the peace.

Costello fought on. He hand-scribbled the cover sheet for a rambling appeal to the Second U.S. Circuit Court of Appeals in New York — a document that was long on Bible scriptures but notably short on case law. Against seemingly long odds, Costello won a partial victory on appeal.

The appeals court agreed that, on its face, Burlington’s noise ordinance is not unconstitutional and not overly vague. But it kicked the case back to Vermont federal court to answer a central question: What is the normal noise level on Church Street?

That’s where the case stands now, and each side has submitted to the court its own version of what “normal” sounds like on the Marketplace.

To the city’s lawyers, Church Street is a “vibrant — but peaceful — place” where people can “walk and talk, or enjoy an outdoor meal, without having to raise their voices to be heard.” It is not, they say, a place for anyone to engage in “sustained yelling.”

City lawyers argue that Costello’s own video recording proves how tranquil Church Street was the morning police confronted him — and, by contrast, how disruptive he was.

Costello points to another side of Church Street’s personality. He notes the mall is host to a jazz festival with bands blaring for several hours a day, politicians giving amplified speeches and “zombie walks” that see mobs of Burlingtonians “soaked in blood, and screeching at the top of their lungs.”

How is shouting Bible verses more disruptive than any of those activities, Costello wonders?

“If I didn’t like jazz and I was sitting in a restaurant,” Costello says, “do I have the right to stop them from playing their music?”

Special events and activities permitted by City Hall are exempt from the noise ordinance, as are spontaneous protests, depending on how long they last and how loud they are, says Burlington Police Chief Mike Schirling. Sustained shouting by any individual is not exempt, the chief says. Costello believes that religious speech enjoys special protections that would supersede the city’s noise ordinance and permitting rules.

Burlington’s noise ordinance was previously upheld as constitutional in a federal case decided in 2003. Urban Outfitters was sued for playing in-store music that disturbed the law firm upstairs. The store appealed, but was ultimately court-ordered to turn the volume down.

Costello says he turned around a life of “sin” and a criminal past to become a sidewalk preacher. He had three children out of wedlock and was convicted of drunk driving in 1993 and marijuana possession in 1996. He skipped his jail sentence and went on the lam for five years, during which time he read the Bible and was “pricked” by God, he says. He served a belated six-month sentence following a traffic stop by state police in 2001.

Costello usually preaches with a large poster depicting a dismembered, aborted fetus, and one with the slogan “God Hates the Hands That Shed Innocent Blood.” He bought the fetus sign for $60 from a website called AntiAbortionSigns.com. He’s got another, homemade sign with the anti-gay slogans “No Fags in Heaven” and “Fags Burn in Hell.”

Costello is the first to admit that his message is disturbing to many — especially along quaint, family-friendly Church Street. That’s his goal. Costello believes the world is lost in sin, and sidewalk sermons bring it a message of salvation.

Over the years, disgusted onlookers have spit on Costello, slapped him and wrestled him for his signs, he says — once into the middle of an intersection.

Tammy Foster, store manager at Lippa’s Jewelers on Church Street, had a different reaction when she encountered Costello. She called the cops that day in June 2007 to complain about his “very graphic, very disgusting sign.”

“People that walked by had to shield their children from this disgusting site,” says Foster. “You do not need to have that kind of visual anywhere publicly. That would be like publicly screening an R-rated movie.”