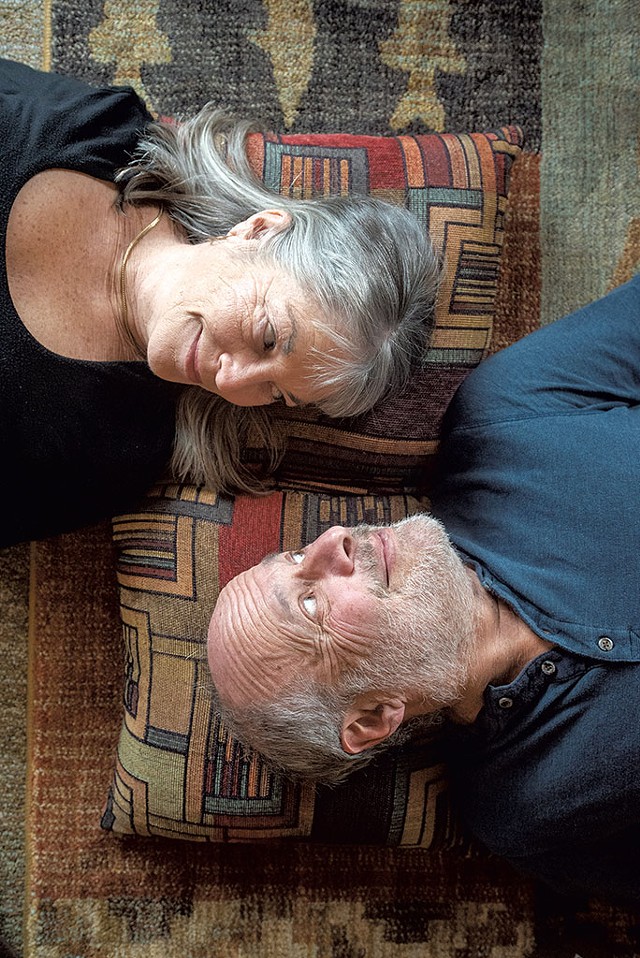 Israel Helfand isn't easily shocked by his clients' sexual proclivities, but he was somewhat taken aback by the district attorney who got aroused by dressing as an adult baby. The DA's wife was far more surprised when she found her husband sprawled on their bed, wearing nothing but a man-size diaper and sucking a pacifier.

"She freaked. There was no conversation when they met that this was one of his sexual kinks," Helfand said. "She also felt really betrayed. If he was keeping that a secret, what else was there?"

Helfand, 67, is a certified sex therapist and a licensed marriage and family therapist. Since 1983, he and his wife, Cathie, 68, a licensed psychotherapist and marriage and family counselor, have been in practice together serving primarily affluent couples — doctors, CEOs, celebrities, professional athletes — who are on the verge of marital meltdown. Their clients' problems typically arise from infidelity, sexual dysfunction, or complications such as a bi-curious spouse or an unusual fetish.

The Helfands regularly host an intensive three-day counseling retreat called Marriage Quest on their 66-acre property in Cabot. Couples travel from all over the world and spend thousands of dollars on their services. Over the years, by the Helfands' account, they've saved hundreds of marriages and helped spouses become more sexually comfortable, compatible and communicative.

Now, after nearly four decades in practice, Israel Helfand has compiled highlights from his career in a memoir, which he plans to self-publish by his 69th birthday. He shared some of his more colorful tales with Seven Days, including recollections of his path to becoming a sex therapist.

"I learned that the brain can have a different message than the body." Israel Helfand tweet this

Starting sex therapy can be stressful. Helfand recalled one woman who smoked crack cocaine in his bathroom right before her counseling session because, as she explained, she needed to be more "present" for the discussion.

Another client, a well-to-do physician, traveled to Vermont with his wife and surreptitiously booked a room for his mistress in the same hotel. All weekend, the doctor would tell his spouse he had to attend medical rounds whenever he wanted to sneak into his girlfriend's room one floor below.

"We found that out afterwards because, unbeknownst to us, [his wife] had hired a private detective to track him," Helfand said.

Helfand has worked with many evangelical ministers and their spouses. One reason they come to him, he said, is that he's Jewish, and they assume he'll be less judgmental than a fellow Christian.

Helfand received mixed messages about sexuality growing up in the 1960s in New York City, where his father owned an electrical supply store in the heart of Spanish Harlem. As a child, Helfand often accompanied his father to work, where he saw signs of the city's teeming sex trade.

"From a young age, I saw prostitutes and bums, women at 5:30 in the morning laying on street corners in their own urine," he remembered. "I witnessed girls going from store to store [offering] $5 blow jobs. That was a lot of my early childhood."

Though Helfand's family wasn't devout, his parents had their own Sabbath ritual of sorts.

"Every Friday night ... was predictable," he said. "After a family dinner, the two of them would excuse themselves and go to the bedroom. We learned to leave them alone ... for their conjugal rites."

For years, Helfand struggled to reconcile two opposing views of sexuality. What he called "the bright side," or the romantic version of sex, was modeled by his parents, for whom love was the only legitimate aphrodisiac. The "dark side" was exemplified by the prostitutes, pornography and strip clubs Helfand encountered on the streets of New York.

Helfand's confusion only grew in his teen years. In his seventh-grade homeroom class at Lincoln High School in Yonkers, N.Y., he experienced the cognitive dissonance of being simultaneously repelled and aroused by the sexual antics that occurred in the back of the room.

Young Helfand sat in front of a girl named Doreen, on whom he had a crush. During class, Doreen would let two other boys fondle her breasts and put their hands up her skirt.

Hel fand had heard that teen couples went to the roof of the high school to hook up. One day he went up to see for himself, only to find those same two boys having sex with Doreen, the girl he longed to date.

"I was fighting off a hard-on while thinking to myself, This is so fucked up! But I couldn't stop watching," he said. "This is where I learned that the brain can have a different message than the body."

Helfand met his first wife, Colleen, in college and took his first sex therapy course in graduate school at the University of Bridgeport in Connecticut. Though most of his fellow students were "privileged white kids from Westport," he said, he also met some nontraditional students, such as a sex worker and the female assistant to Al Goldstein, cofounder of Screw magazine.

In the mid-'70s, Helfand wrote his master's thesis on sexually open marriages. He and Colleen had married and begun experimenting with multiple sex partners, following the advice of the 1972 best seller Open Marriage: A New Life Style for Couples by Nena and George O'Neill.

In a graduate counseling course, Helfand met his now-wife, Cathie, who was herself married at the time. It wasn't long before the two couples became friends, then sexually intimate.

However, Helfand soon discovered that an open marriage could be a double-edged sword.

"I will never, ever forget walking by the room where they were having sex and hearing the sounds of lovemaking — specifically, my wife very much enjoying herself," he said. "It tore my heart out. It was one of the most painful experiences of my life and kind of slapped me across the face."

Soon thereafter, Helfand wrote his doctoral thesis on the importance of fidelity to "marital conservation." Though he still considers himself sexually progressive, he doesn't advise open marriages to most clients.

Helfand's efforts to salvage his first marriage through intensive, weekend-long counseling sessions ultimately failed, but the sessions became a prototype for Marriage Quest. When Cathie's own marriage ended, she and Helfand reconnected; the two were married in 1985.

One night, Helfand recalled, the model showed up at his office at 9:30 p.m., knowing that he often worked late and would be alone. Wearing a fur coat and nothing else, she sat down on Helfand's couch, removed the fur and offered herself to him.

"'You're a beautiful woman, but would you please put that back on? I'm not going to have sex with you,'" Helfand recalled telling her. While he wouldn't compromise his marriage or professional license for easy nooky, he admitted that the temptation was strong — as if he were back on that high school roof, fighting off an erection.

Helfand rarely faces such conundrums anymore, he said, in part because he works so closely with his wife. Even after years of working as a sex therapist, though, he still sometimes refers clients to a different practitioner when they have proclivities that make him uneasy, such as being turned on by blood or extreme piercings.

Helfand said he has no professional regrets, but he has made mistakes. Many years ago, for instance, he worked in Connecticut with a male client who was deeply troubled by deriving sexual delight from nipple stimulation. At the time, Helfand used a practice called aversion therapy to "get [the client] off his nipples and on to something else."

Today, Helfand said, he'd never take such an approach. Instead, he would help his client feel more comfortable with how he experienced pleasure.

The original print version of this article was headlined "Coming Clean"