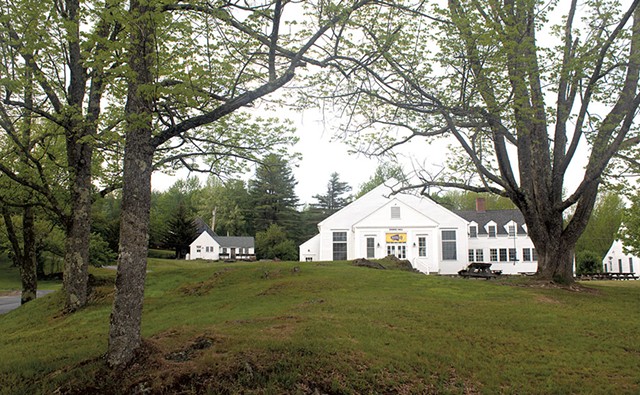 Seth Andrew arrived in Marlboro with a promise to remake the southern Vermont town's college campus into a launching pad for a new form of higher education.

A year later, Andrew is leaving under a cloud following his arrest for bank fraud. A man in line behind him for a chance to reuse the property, Adrian Stein, is a secretive Canadian businessman who dreams of building a $400 billion asteroid-defense system around Earth, unrelated to the property.

The state of play at the former site of Marlboro College might seem farcical if not for its deep emotional significance to the town's 1,000 or so residents. Many have personal connections to the secluded, wooded campus and were heartbroken by the college's demise.

"Most of the town is just kind of shell-shocked and waiting for the next shoe to start dropping," said resident Lauren Poster. "We just feel powerless."

The royal mess Andrew and his team have made in Marlboro could present an opportunity for Stein, who has been searching for a campus to use in a proposed global business network based on a supposedly forthcoming cryptocurrency. Stein already claims ownership of the campus — the result of a disputed transaction struck with Andrew just before the fraud allegations came to light.

Democracy Builders persuaded trustees with its vision for a low-residency college, dubbed Degrees of Freedom, that would focus on serving disadvantaged students without saddling them with debt. The nonprofit paid just $225,000 in cash for the campus and assumed $1.5 million in long-term debt.

It was a controversial conclusion to a contentious merger, made worse when a group of largely anonymous former students and staffers of the charter school network Andrew founded, Democracy Prep, came forward to accuse him of narcissistic, abusive and racist conduct.

Andrew's April 27 arrest on federal charges of wire fraud, money laundering and providing false information to a bank seemed to confirm some residents' worst suspicions. The criminal complaint centers on evidence that Andrew stole money from Democracy Prep escrow accounts to inflate his assets so he could get a better mortgage rate on a $2.4 million apartment in Manhattan. He is in talks with prosecutors to resolve the case "and other matters," according to a May 27 court filing.

Democracy Builders cut ties with Andrew upon his arrest, but the future of its program at Marlboro remains in grave doubt.

In the weeks that followed, Degrees of Freedom's then-CEO, Chandell Stone, told news outlets that the program's launch would be delayed indefinitely as she sought to rebuild relationships with donors. But according to Democracy Builders, Stone's role with Degrees of Freedom ended May 21, and her employment with Democracy Builders remains a "sensitive matter." Stone declined an interview request via email.

Democracy Builders is now "working to review and revise and revisit" Degrees of Freedom, board member Alize-Jazel Smith said in an interview. She declined to discuss its future in Marlboro but said managing the campus property was not a core mission.

Degrees of Freedom's prospects were questionable even before its founder was charged. As VTDigger.org has reported, the "college," as the program has at times described itself, had not yet applied for any accreditation and could not participate in federal financial aid programs for students.

Moreover, Democracy Builders appears to be short on cash, according to financial records reviewed by Seven Days.

That's where Stein came in.

Just weeks after taking ownership of the Marlboro campus, Andrew began negotiating a deal to flip it to Stein, according to hundreds of pages of transaction records submitted to the Vermont Attorney General's Office. By state law, the office reviews deals in which any nonprofit sells off its assets. Records of the review were made public earlier this year following a request by a student journalist at Emerson College.

On paper, it looked like a sweet deal for Democracy Builders. The agreement to sell the Marlboro campus would yield quick cash and relieve the nonprofit of its maintenance, which has been estimated to cost at least $1 million per year. Democracy Builders was getting $2.5 million in cash for a property for which it had paid just $225,000 only months earlier. The total value of the deal, including noncash considerations, was $9.4 million, according to the Attorney General's Office, compared to $1.73 million for Democracy Builders' initial purchase from the college.

Andrew walked into the white-clapboard town office on January 21 and personally transferred the property to Stein, through an entity of Stein's business venture called Type 1 Civilization. But on February 25, Andrew walked in again and filed a presigned quitclaim deed transferring the campus back to Democracy Builders, town records show.

"I got the sense he was trying to work out a partnership with Type 1 Civilization but it quickly did not work out," Town Clerk Forrest Holzapfel wrote in an email to Seven Days.

Stein believes he's still the rightful owner of the campus and that Andrew did not have legal basis for the February reconveyance. He said that Democracy Builders declared him in default for campus maintenance on the day he took ownership, then used a clause in the sale agreement to reclaim the campus from him.

He has not filed a lawsuit, but the campus' long-standing tenant, Marlboro Music, did. The nonprofit asked a judge in May to declare which entity — Democracy Builders or Type 1 — is essentially its landlord.

No one in Marlboro knows much about Stein, and he wants to keep it that way. He politely ended a recent phone interview after this reporter inquired about his business past.

"I try to be as quiet and as anonymous as possible," he said. "I'm not interested in any needless, unnecessary attention or promotion."

Stein's guarded stance makes it difficult to assess how serious the man is about his grandiose plans.

His interest in the Marlboro campus, a collection of more than 50 buildings nestled on a wooded hillside near the town's southern edge, stems from a vision to create a global industrial network based on blockchain technology. His business entity, Type 1, is a reference to the so-called Kardashev scale for measuring technological advancement. The idea seems to be to create a remotely accessible fabrication facility — possibly in Israel, he said — that entrepreneurs could use to start all kinds of businesses. The business network would trade on a cryptocurrency dubbed Chronotanium 120 that Stein is developing.

Stein has been scouring the northeastern U.S. for a college campus to serve as what he called an "intellectual hub" for this imagined empire and the site of an annual convention. Stein had a purchase agreement in place last year with the trustees of another shuttered Vermont institution, Southern Vermont College, but the deal was canceled when Stein failed to put down the required deposit, trustee Dave Newell said. Marlboro's trustees also passed over a proposal from Type 1, Stein said, even though his was "more enticing, financially" than the one put forward by Democracy Builders.

Stein rebuffed further questions about Type 1, saying the project was "under wraps" until its fall launch. He specifically declined to discuss Chronotanium on the grounds that he does not plan to promote the cryptocurrency inside the United States due to securities regulations. Chronotanium has been a component of his plans for Marlboro, however. Type 1 promised to deliver up to $10 million worth of the cryptocurrency to Democracy Builders in the form of a "founder's wallet," according to a purchase agreement that the latter organization submitted to the Attorney General's Office. But Stein said the provision was dropped in the final deal.

An obscure website for Type 1 reviewed by Seven Days last week documented Stein's vision in greater detail. Type 1 intends to create "upwards of 100 million jobs and a total economic output of ten trillion dollars." Chronotanium, the site claimed, will "emerge as the de facto digital currency" and will be supported by an annual HumanKind convention, which is designed to turn every attendee "into a potential holder of" the cryptocurrency. Promotional videos for the upcoming "initial coin offering" claim Chronotanium could earn investors $1,000 on their dollar. One slide, titled "What We Need to Get Through ICO," listed three things: "Money," "Money" and "Money."

Stein said the site was not supposed to be publicly available; now, a password is required to view it.

Stein published a medical journal in the 1990s, then purchased a long-running literary magazine called Books in Canada with his wife, Olga. The magazine ran into financial difficulties, which Stein alleviated by cutting a distribution deal with Amazon, according to Canadian news reports from the time. Around that time, he also grabbed headlines for a proposal to erect a planetary shield to protect humans from asteroids.

Books in Canada folded in 2008 following the Steins' decision to pen a controversial front-page article in defense of media mogul Conrad Black while Black was facing criminal fraud charges. Seven Days was not able to locate information about Stein's business activities since Books in Canada closed.

Stein's involvement in Marlboro has not put residents at ease. "The whole thing doesn't feel right," Poster said. Stein, she said, is another "unknown. The unknown is worrisome."

Some in town are hoping that the turmoil will provide a chance for Marlboro Music, which operates an annual classical music festival on campus, to take ownership.

Like Stein, the music school tried and failed to buy the campus when the college closed. The nonprofit, however, has a long-term lease agreement that gives it the right of first refusal if the property is sold. The clause took effect January 22 — one day after Andrew transferred the property to Stein.

"The biggest fear is that you have this beautiful campus, which could be used for so many things, fall into disrepair and become a blight on the town," said Adrian Segar, a former Marlboro professor who has been an outspoken critic of Democracy Builders. "The music festival is probably the best defense we have."

An attorney for the music school declined to comment, citing the pending litigation. A hearing in its civil case is scheduled for next week, and the organization is still planning to host the festival at Marlboro later this summer.

For now, the campus seems suspended in this particularly strange moment. On a recent evening, a note on the admissions building said visitors were not welcome on campus due to COVID-19. A small, yellow banner bearing Democracy Builders' name and its megaphone logo stretched above the entry to the dining hall. But the only sounds on campus came from the birds and a light breeze.

The original print version of this article was headlined "Degrees of Farce | An alleged fraudster and a cryptocurrency creator walk onto a college campus..."