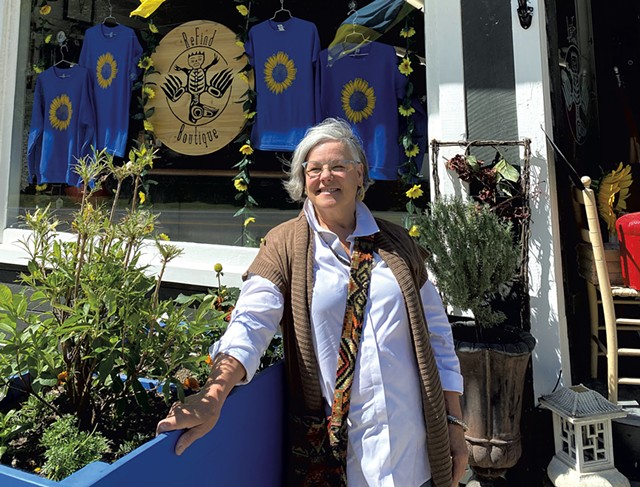 In February, when JoAnn Yurchesyn, owner of ReFind Boutique in Richmond, heard that Russia had invaded Ukraine, she decided to close her shop for the weekend. It felt like the right thing to do.

The following weekend, though, the third-generation Ukrainian Canadian announced something radical: All proceeds from three days of sales at the secondhand shop would be divided between five charities benefitting Ukraine.

Yurchesyn, who opened the boutique off East Main Street less than a year ago, was floored by the response. Customers arrived from all over the state to show their support.

It inspired her to open a new section of the store: the "Ukraine Support Center." Customers can donate items that Yurchesyn will sell, with all proceeds going to defend Ukraine.

Community members quickly showed up with antiques, clothing and even handmade sunflower brooches. One supporter is sending stained glass hearts from California. She had heard about the endeavor from a friend in Richmond and felt compelled to pitch in. Yurchesyn has managed to raise $14,000 to date. The Ukrainian flag flies proudly outside her store.

"We live in a spectacular community, without a doubt," Yurchesyn said.

Yurchesyn's grandparents emigrated from Western Ukraine to Canada at the turn of the century; she was born and raised in Nova Scotia among other Ukrainian families. She moved to the U.S. in the early 2000s and settled in Vermont about eight years ago.

Opening a secondhand store had been on her "bucket list" for years. Time spent abroad meant a refined eye for interesting art, and a soft spot for collecting odd knickknacks.

Since opening last September, the treasure chest of a store has more than doubled its inventory and is looking to expand next door. If she gets the space, Yurchesyn said, it might house her Ukraine Support Center. With all the donations, she's starting to run out of room.

"It's giving people a sense that they are in some small way making a difference, and that is just a very important and essential part of life right now," Yurchesyn said.

The original print version of this article was headlined "Good Find"