The restaurant's name alone indicates that Union Jacks at 370 Shelburne Road in Burlington will deliver excellent fish and chips in the British tradition of the corner "chippy."

If I had any doubt, I would have needed only to read the online review posted by 16-year-old Noah Carmona of Colchester, excerpted here with his permission.

"The fish was super crisp and flavorful," Carmona wrote. "The fries and fish were massive and the fries were cooked to perfection ... I literally (slightly) burnt my mouth because I could not stop eating it."

Inspired by my London childhood, I had decided to scout for local fish and chips, something I occasionally crave and never cook myself. Then my colleague Jordan Barry reminded me that it was currently Lent, during which many Catholics eat fish, especially on Fridays.

Ron Cleveland, who co-owns Union Jacks with his wife, Shelley, confirmed that fish and chips sales leap by 25 to 30 percent during Lent. "It all builds up to the final Good Friday," he said.

My inaugural fish and chips meal at Union Jacks ($14.50 for 6 ounces; $8.54 for 3 ounces) underscored Carmona's astute observations. The haddock, encased in a crisp, puffy shell of batter, flaked beautifully and was, indeed, so freshly fried that it threatened to burn my mouth.

Shelley is originally from Yorkshire, England, and the Clevelands use her grandmother's secret batter recipe, Ron said. The chips were authentically chunky, and the meal earned further cred for its lack of coleslaw on the side, a thoroughly American addition.

According to the National Federation of Fish Friers (yep, it exists), based in Leeds, England, the United Kingdom boasts about 10,500 fish and chips shops. That's almost eight per 1,000 people, according to research by UK company takepayments. Vermont has far fewer, but I've found several fine options besides Union Jacks. All, I'm thankful to say, provide malt vinegar, the favorite Brit fish and chips condiment. 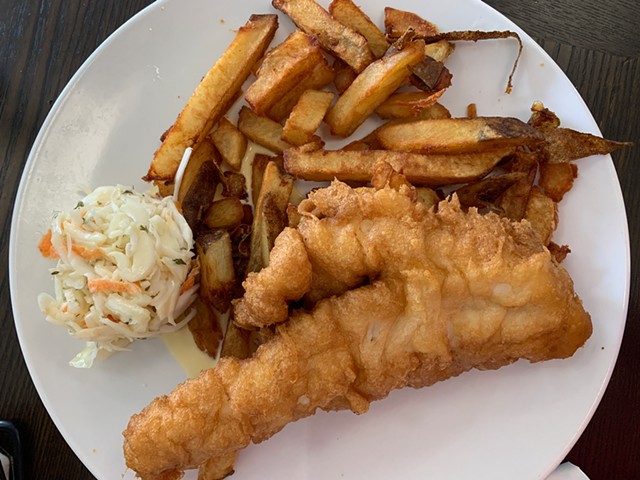 Since 1951, the wholesale arm of family-owned Ray's Seafood has bought yellow perch from local anglers. At Ray's Seafood Market & Restaurant at 7 Pinecrest Drive in Essex, the kitchen serves the butterflied catch in a light, crunchy batter with a choice of sides in two sizes ($13.95 or $20.90). Ray's solid version of regular fish and chips, made with nuggets of scrod, costs the same.

At the Fish & Chip at 1210 Williston Road in South Burlington, owner Claire Banh juggles orders and deep fryers almost single-handedly. "I'm always here all the time," Banh said while delivering our very good fried haddock with thick, bronzed chips ($11.95). On the insistence of other customers, we also tried the off-topic but delicious grilled, seasoned cod ($13.95). If slaw must be served, Banh's lightly creamy version hits the perfect sweet and tangy balance. 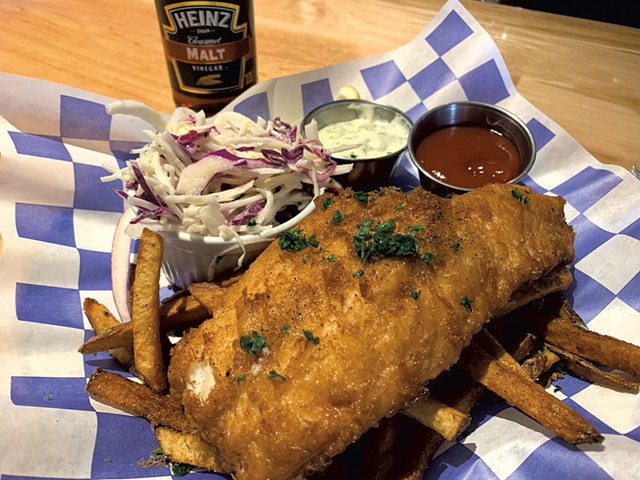 Finally, I ventured north to 30 South Main Street in St. Albans, where I happily crunched my way through beer-battered fish and chips ($15) at the Drake Bar and Kitchen. Chef and co-owner Eben Hill shared that he makes a tempura-style batter lightened with his dive bar favorite: Pabst Blue Ribbon. Hill said Lent definitely boosts fish and chips business: "It doubles, easy. Makes our head spin."

The original print version of this article was headlined "Chip, Chip Hooray"