A Roundup of Virtual Ventures From Vermont's Creative Sector 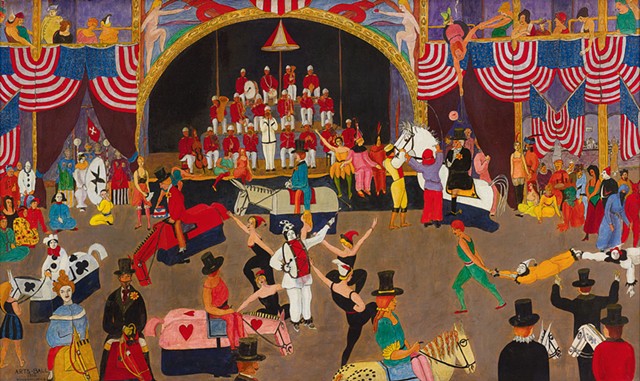 Another week, another spate of online offerings from Vermont's incessantly creative sector. Seven Days has reported on many virtual activities, both in print and on our Live Culture blog, since the coronavirus pandemic began and everyone hunkered down. We've informed you about livestreamed music concerts and comedy shows on our blog series Almost There. And now, as we face month two of staying at home, it's time to take a roundup approach for other stuff.

Not all online experiences have the same intention, of course, and to that point we're categorizing a few of them this week as "Watch," "Do" and "Help."

The University of Vermont's Fleming Museum of Art has been busy behind its closed doors coming up with things to look at online. Thing one, the biggest endeavor (still in progress), is the online collections database, which allows viewers to search and explore more than 20,000 objects in the museum's permanent holdings. Grab a bevvie of choice and settle in; this is an extensive tour.

Thing two is called Fleming From Home, a quarantine-era offering of new and archived videos. If you didn't make it to "Let's Have a Ball! Wood Gaylor and the New York Art Scene 1913-1936" before the museum shut down, you can enjoy a narrated virtual tour of the exhibition instead. In voice-overs, curator of education Alice Boone interviews museum curator (and Wood scholar) Andrea Rosen, and their conversation provides enlightening deets about this charming artwork. This is just episode one, so stay tuned for more.

When Melissa Lourie, artistic director of the Middlebury Acting Company, had to reschedule the spring production of Outside Mullingar due to the pandemic, she didn't take the disappointment sitting down. She turned to Hamlet.

Lourie managed to put together a project that, though it didn't pay actors, at least gave them something amusing to do — from the isolated comfort of their own homes. "I had the idea that it would be fun to take Hamlet's soliloquy ['To be or not to be,' etc.], and give lines to 25 of the best actors in Vermont." Each actor was to take a smartphone video of themself reciting their lines. "I told them to relate it to what we're going through at this time," Lourie noted. Tim O'Leary produced a video from the individual recordings.

Many of them took a wryly humorous approach to Hamlet's angst. The inspired props include a cat, goats, a toddler, a blowtorch and, of course, face masks. Look for the video on YouTube: "Hamlet's Hindsight is 20/20: To Be or Not to Be in the COVID Era."

In a better world, poets would be considered "essential" workers and would even get paid. For now, we can look to the Town of Weybridge, which offers a "cure" for cabin fever: the third annual Haiku Contest.

Founded by local writer Julia Alvarez (whose novel Afterlife was recently released), the competition is open to all ages and is not restricted to Weybridge residents. Alvarez and fellow local author Jay Parini are co-poet laureates of the Addison County town and will judge contest entries in adult and youth categories.

You may remember from high school English class that a haiku is an elegant exercise in brevity: a 17-syllable, three-line poem with five syllables in the first and third lines and seven syllables in the second. The traditional Japanese format often describes images from nature. That's not mandatory, but in a publicity release for the contest, Alvarez suggests, "In times like this, when many of us are quarantined, cooped up, and spending a lot more time in nature, we see, hear, touch, smell, taste things we might have missed before in our hurry and busyness."

A ceremony for contest winners usually takes place during a town picnic in July, but that is currently uncertain. The deadline, July 1, is also flexible, depending on the pandemic's course.

Haiku entries can be sent to georgebellerose@gmavt.net. Poems will be published periodically on the town's website. For inspiration, here's a haiku by 2019 youth winner Esra Anzali, then 11, titled "Rusty set of swings":

Childhood memories
Are made everyday here
Things to remember.

Are you a trivia night fanatic missing your fix? The Vermont Historical Society has got you covered, and in a most jeezum-crow way. Every Wednesday in April (OK, there are only two left) at 7 p.m., a Vermont-themed session boots up on Zoom. You can find the theme on the VHS website, but we'll just go ahead and tell you here: This week's is Vermont towns; on April 29, it's famous Vermonters (e.g., cartoonist Alison Bechdel, pictured).

It might not replace your raucous, competitive trivia team dredging up the names of '80s child actors at your favorite watering hole, but, hey, you can still have a beer. Also, as the VHS helpfully points out, you don't need pants to play.

On the other hand, if you're a parent with kids now home every single day, you might like to know that these trivia sessions are for all ages. Surely this counts as homeschooling? 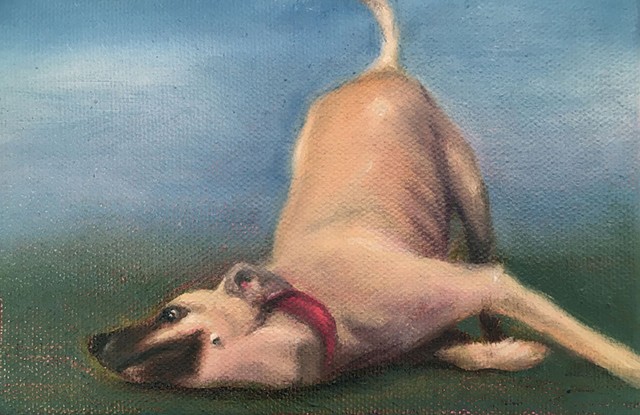 In this time of social distancing, a typical benefit art auction is out of the question. Studio Place Arts in Barre has found a creative solution. Of course, part of it involves the good old internet.

The Art to Go silent auction invites viewers to look at artworks on SPA's website and either make a bid or "buy now" for a designated price. One hundred percent of the proceeds will fund the center's art programs. As of press time, more than 50 artworks were on offer, but this keeps evolving, so check back.

The auction continues through August 15, but if you purchase something outright and want to fetch it, SPA is offering curbside pickup. Otherwise winners will be notified the week of August 16.

Visual artists are often entreated to donate works for a cause. Montpelier-based James Secor chose to volunteer his stay-at-home time without being asked. That is, Secor has created an online store that's offering batches of art postcards, the sales of which benefit the Vermont Foodbank.

"The deal is, you get some postcards of my paintings, and the Vermont Foodbank gets 100% of the purchase price," Secor writes in a recent newsletter. And, he notes, his partner has offered to match the sales, doubling his donation.

Secor has reproduced five paintings as 4.5-by-5.5-inch postcards and also offers a variety pack. Each pack is $8.

Of course, he surely wouldn't mind if you also wanted to buy any of his colorful acrylic-on-board scenic paintings or still lifes, as well. A 2010 graduate of Hobart and William Smith Colleges in Geneva, N.Y., Secor has made a name for himself with a number of exhibitions around central Vermont; his show "#nomophobia" at Studio Place Arts in 2017 was one of Seven Days' art critics' seven faves of the year.