A Rock and a Hard Place 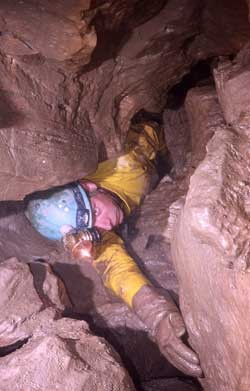 In the winter, Vermonters have their “secret” backcountry stashes of powder; in the spring, they frequent hidden fishing holes; and in the fall, they check out private spots for prime foliage views. But during the summer, the state’s most exclusive recreational resource may be the labyrinth of caves worming its way through Green Mountain marble and granite.

“It’s the last wilderness on Earth,” says Peter Youngbaer, the Plainfield-based president of the Vermont Cavers Association, Grotto 394 of the National Speleological Society (NSS). “There are many, many caves to be explored, and that thrill — maybe behind that crack in the wall is something new and wonderful that nobody’s ever seen, and you’re going to be the first — that’s an amazing feeling.”

Vermont cavers are often reluctant to reveal their favorite spots, as only about 200 caves have been discovered in the state. Even so, local enthusiasts — who will host the NSS convention in Essex Junction in August 2010 — are willing to shed some light on their dark pursuits.

Peter Quick, a caving expert now based in Jaffrey, New Hampshire, dived into his underground Vermont pastime while attending the University of Massachusetts in the late 1970s. His first experience was at Morris Cave in Danby, one of the state’s best-known caves — and New England’s second largest. “It’s tight and miserable,” says Quick of the 1800-foot-long passageway.

Nevertheless, he was hooked. “It was such a remarkable experience, sort of squirming your way through these passages that weren’t much bigger than your body,” Quick recalls. “You’re going headfirst down these slopes, and you’re thinking, My God! Your shoulders barely fit, and you’re squeezing through, and you realize after a while that you’re, like, 100 feet under the ground, in solid rock, and that this is the weirdest thing to be doing.”

Eventually, Quick wrote a book on the subject — Vermont Caves: A geologic and historical guide. Compared with places such as Kentucky, West Virginia and even neighboring New York State, he says, Vermont is a dim prospect in the caving world. The state’s geology just doesn’t allow for the water permeation and underground flows that can form massive caves, such as the 367 known miles at Mammoth National Park in Kentucky. “A lot of things have conspired against cave formation in Vermont,” Quick says. “There might be, oh, just 60 caves over 100 feet long.”

Right now, other forces are conspiring against Vermont cavers, closing some of their favorite haunts. In February 2006, according to the U.S. Fish & Wildlife Service, a caver near Albany noticed some dead bats with a white substance on their noses. By January 2007, the state’s biologists began documenting the so-called white-nose syndrome, and hundreds of thousands of bats have since died. In some caves where bats hibernate, says the Fish & Wildlife Service, the syndrome has killed 90 to 100 percent of the population.

Cavers may have helped white-nose syndrome spread from cave to cave by carrying the fungus on their clothes. “Cavers are kind of a slovenly lot,” concedes Quick. But now they’re also helping to solve the mysterious illness by conducting bat counts, educating fellow cavers, and staying out of places where bats hibernate. (Respect for bats’ hibernation explains why the caving season lasts only from June to September.) Mt. Aeolus Cave near Manchester is closed, as are the Nickwackett & Chaffee Mountain caves in Chittenden. Other caves have strict cleaning and decontamination protocols issued by the Fish & Wildlife Service.

“Not all caving has stopped; not all caves have bats in them,” says Youngbaer during a phone interview on his way back from a conference on white-nose syndrome in Tennessee. “But we’re avoiding caves, and lots have been closed.”

Rutland-based caver and former VCA president Rick Pingree says that some caves are closed by landowners who are nervous about potential injuries on their property. Last summer, a teenaged girl fell in a cave near Dorset, triggering a much-publicized rescue effort by several VCA members along with local authorities. But such falls, says Youngbaer, are actually quite rare; that was the first rescue he’s experienced in Vermont.

“The biggest threat to someone underground is hypothermia,” he says. “Caves are cold and wet, so you need to be dressed appropriately.” Other rules include carrying three sources of light per person and caving in a group. Four people is an ideal number, says Pingree, who also helps delineate the difference between “cavers” and “spelunkers.”

“Attitude,” he says. “Some of the older cavers say that ‘spelunker’ is a modern term that yuppies have come up with. There’s a bumper sticker: ‘Cavers rescue spelunkers.’”

Whether you call yourself a caver or a spelunker, you can’t venture far into Vermont’s underground world if you weigh much more than 200 pounds or suffer from claustrophobia, say its gatekeepers. “Tight is so tight that you can’t rotate your head from one side to the other,” says Quick — who, at 200 pounds himself, has had to back out of some spots. “If you start panicking, you have to start thinking calm thoughts.”

The rewards for the wriggling, however, sound plentiful. “Physically, it’s very hard work,” says Youngbaer. “You come out and you’ve used every muscle; you crawled, you climbed, you stretched. And the mental challenge of trying to figure out how to get up a wall or rig a rappel is also a real attraction.”

Then there are the sights: flowstone, moonmilk, stalactites, cave pearls and other formations, says Youngbaer. Caves made of jumbled boulders, curved granite or striated marble. One of the few caves open in winter is the Freedlyville Quarry, where Vermont cavers meet to skate on a crystal-clear underground pond of smooth, black ice as light filters through small holes overhead.

“Our caves are more work to get through,” says Pingree. “But you do feel accomplished when you go in, come out six hours later, and you’ve only gone a few feet.”

Pingree, along with fellow former VCA president Ken Moore and current president Youngbaer, put together the bid to attract the NSS annual convention to the Champlain Valley Exposition next summer — a major coup for a state not known as a caving Mecca. Some 750 cavers from around the country are expected to gather for a week of outings and meetings on biology, geology, hydrology and more. And though most of the NSS convention is for members only, some presentations will be open to the general public.

In the meantime, Youngbaer recommends that aspiring cavers contact the Vermont Cavers Association rather than trying to explore the underground realms on their own. “It’s not so much that we’re secretive,” he says. “But when you come in through the Grotto [394] doorway, you stay safe, the cave stays safe, and the cave stays open.”