A Rival Developer Is Challenging the CityPlace Burlington Project in Court 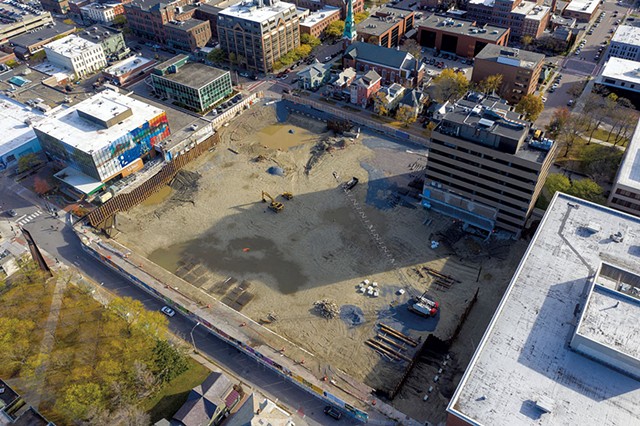 After years of delays, it seemed in February that the CityPlace Burlington project was finally back on track. Mayor Miro Weinberger announced that he'd brokered a deal to settle a lawsuit the city had filed against the developers. The agreement set new deadlines for construction and ensured that city streets lost to the former mall would be rebuilt — a major win for Weinberger just ahead of the mayoral election. The Burlington City Council approved the agreement later that month.

The good vibes continued into early March, when the city's Development Review Board issued a permit for the 10-story project, which includes plans for housing, shops and a rooftop restaurant.

"We look forward to breaking ground soon on this transformative project that will bring so many benefits to our Downtown," managing partner Don Sinex said in a written statement at the time.

But just when the days of the unsightly downtown pit appeared numbered, the CityPlace team encountered another obstacle — this time from a fellow developer.

"He committed the cardinal sin of a developer contesting another developer's right to build." Don Sinex tweet this

Redstone, which owns the 100 Bank Street building adjacent to CityPlace, is challenging the project's permit in Vermont Superior Court's Environmental Division, questioning whether the development has sufficient parking and the application's reliance on traffic data that is more than 5 years old, among other things. Redstone partners Erik Hoekstra and Larry Williams have also sued the CityPlace developers in civil court, claiming that their building was damaged when the former mall was demolished in 2018.

Neither Hoekstra nor Williams responded to several interview requests from Seven Days, but court documents and interviews with the CityPlace owners detail challenges that could sink the embattled project once and for all.

"It's a grave threat," Sinex said of Redstone's litigation, and one he takes as a personal affront from Hoekstra. "He committed the cardinal sin of a developer contesting another developer's right to build. You don't do that. You just don't do that."

Up to this point, CityPlace's primary opponents have been citizen activists. A group of 57 residents sued the developers in 2017 over the original, 14-story CityPlace design. The parties settled, and Sinex agreed to build an additional 200 parking spaces belowground for a total of 967 spots. But the new design features just 422 parking spaces — not enough to support CityPlace's 426 residential units, let alone downtown shoppers, says Burlington-based attorney John Franco, who represents the citizen group.

Franco believes the developers must abide by the settlement. He sued them in February 2019 after they proposed "substantial changes" to the project, including parking, without consulting his clients — which Franco alleges is a violation of the settlement agreement. That case is still pending.

Franco and his clients were prepared to challenge the new permit until the CityPlace team — Sinex and partners Dave Farrington, Al Senecal and Scott Ireland — sued them for threatening to appeal and for trying to enforce the prior settlement. The suit claims the opponents had agreed not to stand in the way of future permits; it asks the court to award them damages and attorney fees.

Yet that back-and-forth pales in comparison with Redstone's demands, which amount to "a breathtaking challenge to this project," Franco said. "It makes our concern about parking spaces look like a footnote."

Indeed, if Franco's clients have launched a targeted strike, Redstone has attacked on all fronts. The company's civil suit, filed last summer, argues that CityPlace developers managed the mall teardown "in a negligent and faulty manner" and caused water and soil to spill onto Redstone's property. It alleges that tenants at 100 Bank Street — which include Goldman Sachs and the Burlington Free Press — have complained about the dust, noise and debris from the demolition, and the suit claims that Redstone has had to "accept less in rent than it otherwise would" because of the gaping pit next door.

The complaint also says that by removing the former mall's parking garage, CityPlace violated an agreement to provide 100 parking spaces for workers at 100 Bank Street. The company is seeking monetary damages and a court order to enforce its parking easement.

The permit appeal in environmental court raises even more concerns and could have an impact on the project's construction timeline. In a 22-page filing on May 10, Redstone questions whether the project design accounted for the traffic from the high school now housed at the former Macy's building next to the project site. The filing also questions whether the development would have sufficient water supply and stormwater controls once it's built.

Parking also features heavily in the appeal. City zoning no longer requires parking for projects in certain districts, including where CityPlace is located. But Redstone implies the project should have been held to the former parking standards, which would have required far more spaces. Further, the filing seems to suggest that the new zoning violates state law "by abandoning all requirements for parking."

Hoekstra, however, is designing a project that would benefit from those very regulations. Though he hasn't formally proposed the project, Hoekstra told city councilors last December that Redstone plans to build a multistory apartment complex on South Winooski Avenue that would have "zero on-site parking."

"You can really get everything you need within a short walk of this site," he said at the time, adding that the plans showcase "what the elimination of parking requirements has created for opportunity in and around the downtown."

What does Sinex make of Hoekstra's plans?

"That goes to show you how two-faced he is," Sinex said.

Sinex thinks Redstone is only fighting the permit to leverage its civil lawsuit. He said Hoekstra sent the CityPlace partners a letter in March, demanding up to $5 million to settle Redstone's claims. They refused, and Redstone subsequently appealed the permit, according to Sinex, who would not provide Seven Days a copy of the letter.

Sinex said Redstone has no reason to worry about parking since his team will honor the agreement for 100 spaces. The partners are also considering replacing a handful of smaller apartments with larger condos, which would reduce the demand for parking, Sinex said.

"What is this appeal about? It's not about parking. It's not about the development. It's about Redstone trying to extract the settlement," Sinex said. "Hell will freeze over before I settle with these guys."

Farrington was similarly uncompromising, saying that Hoekstra's letter "hit us like a ton of bricks."

"Up to that point, we were trying to be good neighbors," he said. "The door shut on any negotiations with them. It's like, All right, we're at war."

Redstone's challenges could seal the project's fate. The longer the litigation lasts, the less attractive CityPlace is to lenders and the harder it becomes for the developers to meet the city-imposed deadline to start construction. If work doesn't begin by September 2022, a development agreement says that the project partners will have to pay the cost of reconnecting St. Paul and Pine streets to the city grid instead of being reimbursed by tax-increment financing funds. Allowing the former mall to sever those streets disrupted travel by motorists and pedestrians for decades and is now seen as a planning mistake. The developers deeded the land for the streets back to the city late last week, the mayor's office announced on Tuesday.

The developers also need easements from nearby property owners — including Redstone — to build the streets. The new segment of Pine Street would run underneath a section of the 100 Bank Street building that's raised above street level. In its permit appeal, Redstone questions whether the city should have approved a project that affects its property without its consent.

When the parties convened for a court hearing by phone on Monday, an attorney for CityPlace, Jonathan Rose, urged Judge Thomas Walsh to schedule a trial shortly after Labor Day in order to keep the project on track. But Redstone's attorney, Matthew Byrne, objected.

"The idea that we're going to speed this through just because they signed some agreement with the city is just a fundamental undermining of my clients' rights to have a real process to examine the project in detail," Byrne said.

"To ram a trial down our throats in 90 days is just not fair at all," he added.

Mayor Weinberger says Redstone's legal challenges won't stand in the way of rebuilding the streets. The city's development agreement gives the CityPlace team until June 30 to resolve the easement with Redstone, at which point the city would take over negotiations. Weinberger said that if those talks fail, the city wouldn't hesitate to use methods such as eminent domain to take the land needed to build the roads.

"We will get that done, I am confident, regardless of whether [the developer] and 100 Bank are able to resolve their differences," he said.

Weinberger remains concerned that the deepening divide between the developers could threaten the project as a whole. The mayor — who has received campaign donations from both Hoekstra and his partner, Williams, as well as from Farrington — said he understands that Redstone has "legitimate interests" to protect through the lawsuit, buthe worries that the proceedings could drag on.

"I do find it unfortunate that these two parties ... are putting so much effort and resources into this dispute," Weinberger said.

"I don't believe that these appeals have yet created critical path delays to the project," he added, "but certainly they could, and they will if they're not resolved fairly soon."

Progressive Councilor Brian Pine, whose Ward 3 includes the CityPlace site, hadn't heard about the Redstone suits until Seven Days called him for comment last week. He said he hopes the project isn't caught up in legal entanglements for too long.

"When we have 400-plus new housing units essentially on the line here, that elevates the importance of finding a resolution to this dispute," Pine said.

If the legal proceedings continue, it could be a while, Sinex said.

"The delay — it could take nine months, and that delay could kill this project," he said. "Redstone will have on its legacy that it attempted to kill, and maybe it will kill, a project that the entire city of Burlington, Vt., wants to see move forward."