A Reporter Gathers With the Rainbow Family


Last week we huddled on the side of a road high in the Green Mountain National Forest, near the entrance to the Rainbow Family of Living Light's temporary encampment. My new friends — three twentysomethings and an aging hippie from the family — were unsure if we needed to hide our opened cans of Budweiser from patrolling U.S. Forest Service officers. Their every passing movement drew warning cries of "Six-up!" from our fellow congregants, who were taking a midday break from their tents and hanging out on the side of the road that serves as the encampment's southern boundary.

The Rainbow Family dates to the early 1970s and celebrates nonviolence, intentional community building and nature. It chose to hold its annual gathering this summer in the town of Mount Tabor, about 15 miles north of Manchester — the first Vermont gathering since 1991. Forest Service officials anticipate that this year's festival, scheduled for July 1 to 7, will draw 10,000 to 20,000 participants.

When I visited, only about 700 people had arrived at the camp. Their campsites were scattered along a three-mile, U-shaped muddy trail that could barely fit two people standing sideways. Between distrustful glances at the law enforcement officers, or "LEOs," a few of the early arrivers tried to explain the group's philosophies.

"It's free, not in the sense of money," said Donovan, a sweet-tempered kid from Arizona. He declined to provide his last name but offered to serve as my ambassador to the gathering. "The people that come here find themselves, who they truly are," Donovan continued. "Society says, 'Have a job, buy a bigger house, have a family,' and some people aren't about that."

The Rainbow Family claims it has no leaders — it's "the largest non-organization of non-members in the world," according to its nonofficial website. The people I met might not have been in charge, but they were die-hards who had come early to establish "seed camp" — worker bees blazing trails and building infrastructure for the massive party to come.

The gathering will culminate on July 4, when, after a morning of intentional silence, congregants will stand in a massive circle in a meadow, hold hands and chant. 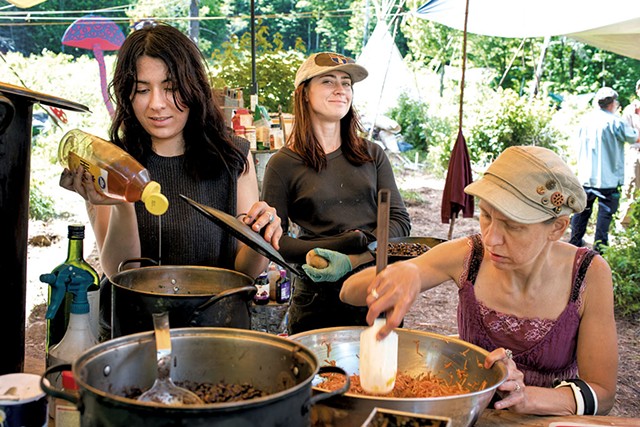 Rainbow Family gatherings are organized around a handful of trailside camps and kitchens that cook food donated by campers and visitors, dish out free meals and supplies, and serve as social hubs. Every year, a handful of adherents strings together plastic pipes and runs them from springs to bring fresh water to the makeshift kitchens. Handmade signs announce the names given to the latter, such as Shining Light, Stockpot and Nacho Mamas. Some of the kitchens have themes. The Dirty Mud kitchen dispenses coffee and breakfast foods. The Nic at Nite kitchen gives out cigarettes.

The seed campers also dig several latrines — "shitters," in Rainbow parlance — in the woods around the camp.

There's even a medical facility of sorts. Tom Curotto runs the Calm (Center for Alternative Living & Medicine) station, caring for the injured in his three-tent spread along the main trail. An emergency medical technician from Idaho, he has traveled to national Rainbow gatherings since 2011, hauling a trailer of over-the-counter medical supplies.

Curotto said he treats several cuts and infections at each annual gathering, as well as a few sprains and broken bones. People have occasionally suffered heart attacks, he said, and, every year, a few pregnant women plan to give birth at the gathering.

The U.S. Forest Service tolerates the Rainbow Family's use of its land every summer across the country, but it's concerned about the impact on local infrastructure, according to spokesman Ethan Ready. Mount Tabor, population 250, is basically a gas station and two residential streets along Route 7. While early arrivals have been able to park along the main road, not far from the encampment, another 10,000 or more will have to hike in from miles away, carrying supplies and leaving their cars in fields or along distant roads.

The law enforcement presence near the encampment is light but constant. The Forest Service keeps officers stationed near the camp's entrance around the clock for the duration of the gathering. Some of the officers on the scene at Mount Tabor said they had been flown in from other states and were veterans of Rainbow gatherings.

The Forest Service noted in a press release that it had already fielded complaints about panhandling and vagrancy. So far, the agency said, its officers had issued 32 "violation notices" for traffic and drug offenses. Yet, despite constant talk among the Rainbow Family of heavy police activity, to my eyes the cops seemed to take a laissez-faire approach.

After a day of chatting and eavesdropping on the Family, it dawned on me that no one here had spoken a word about religion, current events or politics — I never heard the names Sanders, Trump or Clinton. Nor, I realized later, did anyone speak of the Rainbow Family itself, unless prompted. Many were proud to call themselves "hippies" or "gypsies," but "Rainbow Family" seemed to be a shorthand term used only to describe the group to outsiders.

The people gathering in Mount Tabor might best be described as a combination of aging hippies, street kids, hard-core stoners, and out-of-the-mainstream liberals and back-to-the-landers.

Donovan told me he joined the group four months ago because his former, "normal" life felt like a lie.

He had a $17-an-hour job as a computer networker at a small college in Arizona, a tidy apartment, a girlfriend he loved and enough money to buy "whatever the fuck I wanted," Donovan said. But none of it seemed right, and time kept passing. One of his friends had attended Rainbow gatherings. Donovan quit his job, told his girlfriend he'd see her again and hit the road, sometimes traveling with fellow Rainbows, sometimes not.

"It was way too much money," Donovan explained, referring to his old salary. He took another sip of his Bud as we sat in the open trunk of his beat-up SUV. "That's why I'm here. I'm in the woods, where my services aren't needed. This is the only place I know where to live."

Then Donovan interrupted his life story to turn to me and ask, "Has anyone asked to see your asshole?"

I was relieved. I had, in fact, been asked that question twice inside the camp — three times, if you count the guy who asked to see my scrotum.

It was Rainbow code, Donovan explained with a knowing chuckle, for asking if I was a cop. The theory was that no undercover cop would do it ... or something like that.

"No one expects you to do it," Donovan added helpfully. "But if you do, everyone will probably love it."

(Editor's note: The author didn't do it.)

Though I made no effort to conceal my outsider status, I experienced a relentless barrage of friendliness during most of my stay at the gathering. It almost became annoying. At every turn, campers, many of them barefoot, shouted greetings: "Welcome home!" "Loving you!" "Hey, brother!"

Aside from those schlepping in supplies and preparing meals, most of the people at the encampment seemed to be walking around, exchanging greetings and occasionally stopping for a quick chat. Many wore knives, machetes and metal bowls around their belts, which clanked as they shuffled along the muddy trail to the next camp or kitchen.

Here are some of the people I encountered:

A pale, rail-thin man wearing a Slash-style top hat, sandals and black pants rolled above his ankles. He asked me, "You wouldn't happen to have some weed to trade for amethyst?"

A dark-haired kid in a tie-dyed T-shirt passed out in the middle of the trail, with a joint protruding, erect, from his mouth. As I knelt to make sure he was OK, he sprang to life, like a mummy in a kids' haunted house, and asked if I could help him carry a cart of supplies to a nearby kitchen.

A middle-aged guy with a slight paunch and a crooked smile who walked the trails attempting to play a rusting trombone, which, he proudly informed me, someone had entrusted to him.

Many others seemed to be lonely travelers eager for a few weeks of like-minded company. As I walked out of the camp, my tent bag slung over my shoulder, I fell into step with Josh Plamann.

With shaggy red hair and piercing brown eyes, he wore jeans with frayed cuffs, black sandals and a gray sweater that hung crookedly on his lanky frame. The 37-year-old said he's spent most of the past several years bicycling, hitchhiking and walking across the country. Plamann's only steady companion is a 7-year-old Australian shepherd named Honey Bear, who stayed close to his side.

When he needs money, Plamann picks up work inspecting utility poles — his boss excuses his frequent travels, he said — or volunteers at farms in exchange for food and shelter.

Plamann hadn't been to a Rainbow gathering in years, he said. He came alone and hadn't hooked into any of the kitchens yet. But he'd showed up early, to help however he could, and he planned to stay well beyond July 4, to help clean up.

"They care about you even if they don't know you," Plamann said. "They care what you're thinking and feeling. It's a feeling of being home."

Slideshow A Reporter Gathers With the Rainbow Family 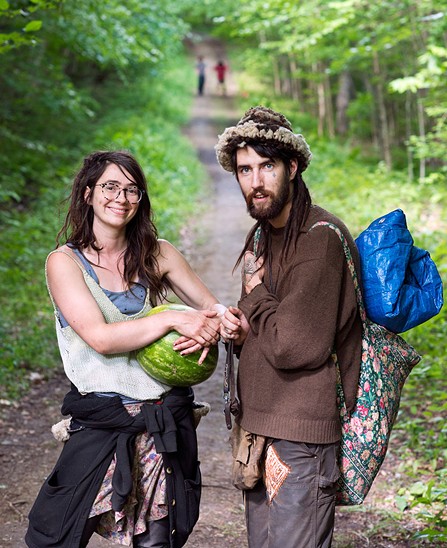 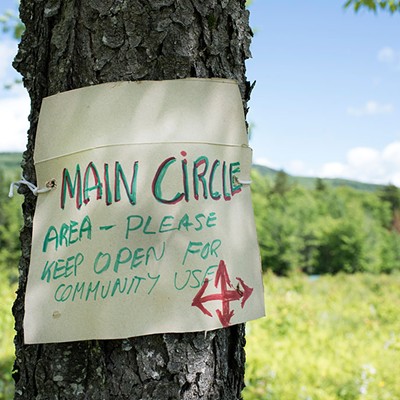 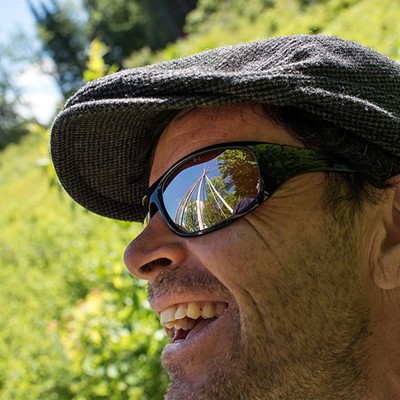 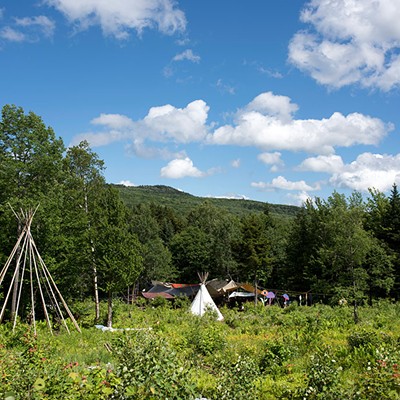 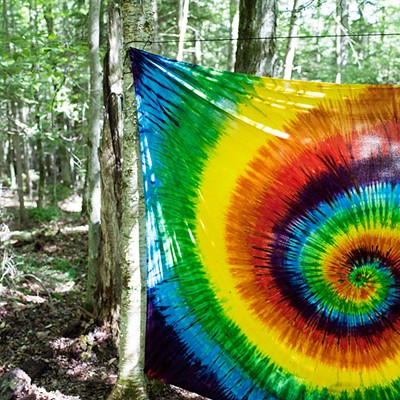 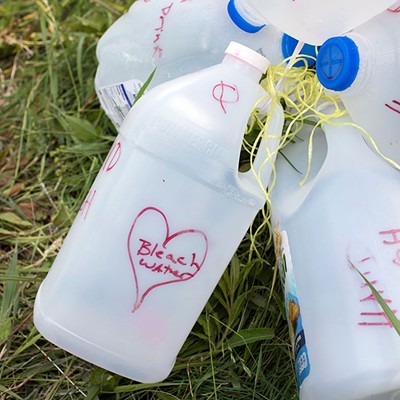 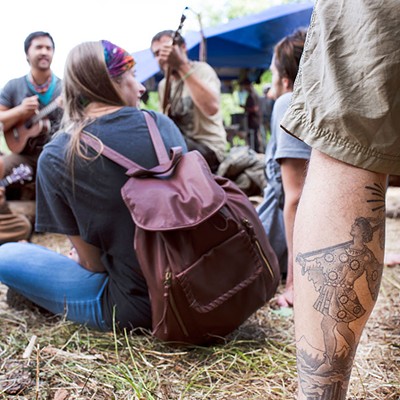 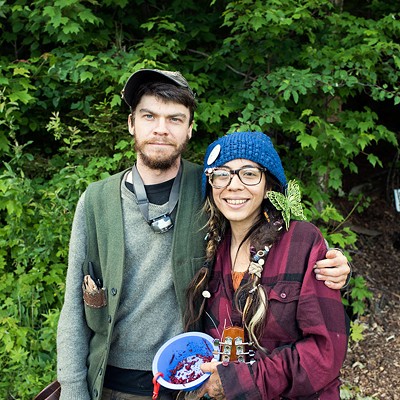 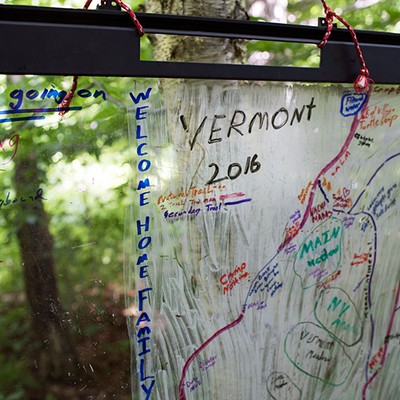 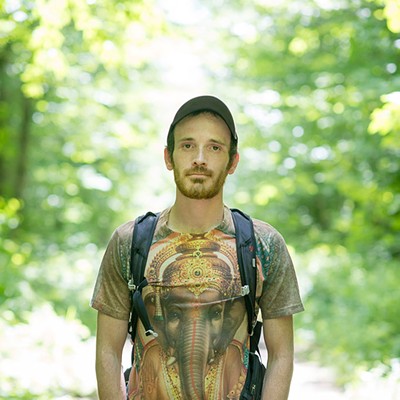 The original print version of this article was headlined "Happy Campers"