A Redo of Burlington's Winooski Avenue Could Cut 121 Parking Spots

Liam Griffin was pedaling his bike on South Winooski Avenue in front of Burlington's Pure Pop Records when a bus stopped in front of him to pick up a passenger.

Griffin started to pass the bus on the left, but when the motorized vehicle pulled back into traffic, it clipped Griffin's front bike tire, sending him sprawling. The fall cracked his helmet and tore up his jacket, but he avoided serious injury.

The close call nine years ago was one of a handful Griffin has had on the downtown street, which has no bike lanes.

"That is not a fun section of road for anyone," Griffin said. "People should be able to make reasonable choices about how they want to get around town and not think, Oh, am I going to die if I do this?"

City planners have finally heeded his call. Recently released designs are intended to improve safety along North and South Winooski avenues, one of only a few roads that runs continuously through downtown, between Riverside Avenue and Howard Street. But the proposals are meeting resistance, especially from those with businesses along North Winooski Avenue in Burlington's Old North End. Like other recent city street makeovers, this one improves conditions for pedestrians and cyclists at the expense of parking spots, generating pushback from those who drive.

The Winooski Avenue proposals are preliminary but could go to the Burlington City Council by early next year. Concepts call for adding bike lanes to both sides of the 1.7-mile road, which would remove 121 parking spaces — more than one-third of the spots along the entire stretch. The changes are worrisome enough that nearly two dozen representatives from local businesses called an emergency meeting earlier this month to air their grievances to city officials.

"The idea of taking 10 places away is kind of horrific at this point," April Werner, a proprietor of North End Studios, said during the November 6 event at nearby Butch + Babe's restaurant.

"We can't even talk about some of these other improvements when we have this basic problem," Werner continued. She noted that it is the businesses themselves that are making the area "more of a destination."

Young professionals have moved into the once blue-collar neighborhood, bringing with them eateries and amenities. Across the street from Butch + Babe's is a 4-year-old apartment complex that's home to a first-floor yoga studio. Around the corner on Riverside is Pizzeria Ida, where a cheese-and-tomato calzone will cost you $25 and a plain cheese pizza goes for $33. Knead Bakery, which serves vegan fare, opened last year.

While the hip new spots attract their fair share of bike-riding, climate-conscious clientele, the business owners worry that the parking reduction would impact their bottom line.

"The option that's being presented doesn't feel collaborative or like a win-win," Butch + Babe's owner Kortnee Bush said, adding that 80 percent of her customers come by car.

The city began an official corridor study back in February 2018, but Burlington Public Works Director Chapin Spencer said upgrades have been discussed for decades. Safety is a major concern: The stretch has six high-crash locations, areas with a collision rate higher than the state average for comparable roadways. Ten percent of all vehicle crashes citywide between 2013 and 2017 happened along the avenue, which has been identified as problematic in several city plans and studies dating back to 2000.

RSG, a consulting firm hired by the city and the Chittenden County Regional Planning Commission, came up with 13 proposals for segments of the corridor. All include bike lanes. Some propose traffic-calming measures, such as mini roundabouts at dangerous intersections, to make travel safer for pedestrians. One plan maintained all 340 parking spots but would have eliminated the street's greenbelt — the grassy strip between the sidewalk and the road. That would have required relocating utility poles and rebuilding curbs, a costly proposition that was ultimately nixed. 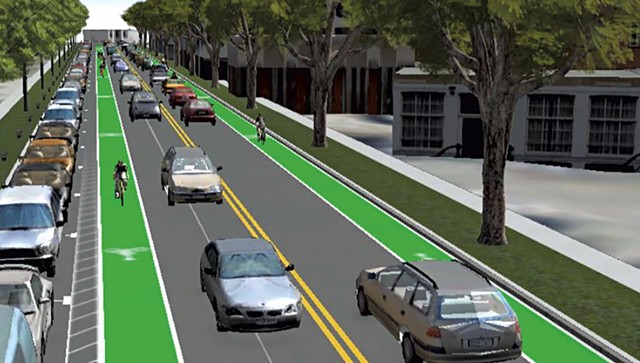 In the business owners' worst-case scenario, the Old North End would lose 109 parking spaces between Riverside and Pearl Street, just short of half the parking stock on the heavily traveled stretch. The 87 spots between King and Howard streets would stay, but 12 spaces between Main and King streets would go.

If enacted, the plan would be the most ambitious makeover for a city stretch since 2016, when officials started a pilot program that reduced 0.8 miles of North Avenue from four lanes to three and installed bike lanes. Project opponents petitioned to stop it and convinced the city council to put an advisory question on the ballot that March. The measure was defeated by a wide margin and, in 2017, the bike lanes became permanent. A traffic study found commute times increased by three minutes, but there were fewer crashes overall.

More recently, the city has begun its Great Streets initiative on downtown roadways. The plans eliminate dozens of parking spots and create narrower streets, but they widen sidewalks and include bike lanes.

Griffin, the bike commuter, has lived in the New North End for six of his 20 years in the Burlington area. He owns a vehicle but primarily uses his cargo bike in town, even to shuttle his two kids to their school in the Old North End. He participated in the North Avenue study but thinks the Winooski Avenue corridor will be more contentious because of parking: The city removed 157 spaces from North Avenue, but they were only used 3 percent of the time. On Winooski Avenue, the parking utilization rate averages 68 percent, according to Burlington's senior transportation planner, Nicole Losch.

And while far more Old North Enders walk to work than their northern counterparts, they're also more than three times as likely to live in a multiunit dwelling than a single-family home, according to data from four U.S. Census tracts in the neighborhoods. Griffin estimated that there are more cars per housing unit in the Old North End than elsewhere in the city, and not every rental includes off-street parking.

That's the case for 22-year-old David Dalton, who lives on a one-way section of North Winooski. The triplex where he lives can house up to eight people, but there's only off-street parking for six vehicles. It's difficult to find on-street parking, Dalton said, though he supports the city's efforts to create sustainable transportation options.

"They're doing the right thing," he said. "Whether that right thing is convenient for me is a different issue altogether."

Just up the street from Dalton's place is the Mawuhi African Market, which has its own parking woes. On a recent snowy afternoon, shop manager Charles Narh and a customer, Jackie Abeneto, complained that clientele for North Winooski's new restos have crowded out parking.

"It's good you have all the varieties around, but if you come and have nowhere to park, it becomes a problem," Narh said.

Abeneto, who lives in South Burlington, said the market draws shoppers from as far as St. Albans and Montpelier. They need a parking spot nearby when they're hauling bags of groceries, she said.

The same is true down North Winooski at Feeding Chittenden, according to Rob Meehan, the food shelf's director. Many clients have physical disabilities, Meehan said, and the 10 spaces in its lot are usually full.

"Folks who are struggling just to get by are going to have a harder time without places to park," Meehan said. He's called city officials multiple times to register his concerns.

Other locals brought theirs — about alternative transportation and reducing carbon emissions — to a November 13 meeting at the Old North End Community Center. "It should have been done years ago," Jason Van Driesche, the former deputy director of cycling advocacy group Local Motion, told the packed room. "This is the right plan, and it's the time, and it needs to happen."

Another attendee agreed: "I'm scared biking on Winooski Ave. I cannot safely bike there," he said. "And I'm scared of climate change. This is a serious issue."

Public Works' Spencer said officials are taking the feedback seriously. The city council's transportation committee will review the concepts before the full council considers them in early 2020, after the draft report is issued. Already, the city has committed to doing an in-depth parking study before any paint touches the pavement.

That's not good enough for some. Christopher Adams, an employee at Dolan's Auto, told his fellow business representatives at the November 6 Butch + Babe's meeting that the issue should be put to a citywide vote instead of being left to the whims of officials.

If councilors get to decide, he said, "We're all gonna be screwed."