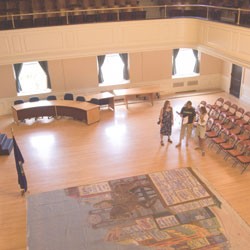 It’s curtains for Chris Hadsel. Curtains and more curtains, all the time. No, not the Martha Stewart Living types, but rather the mural-esque, roll-down versions that once hung in just about every opera house, music hall and grange around Vermont and beyond in the 19th century through the first few decades of the 20th. Burlington-based Hadsel is the director of the Vermont Painted Theater Curtain Project, which, over the past 10 years, has uncovered 185 of them.

But just when she thought she and her team were done with Vermont — they’d reached the end of the National Endowment for the Arts grant that’s been funding the conservation — Hadsel came upon another curtain with a Burlington connection at an auction in Maine. And goodness knows she’s never met a theater curtain she didn’t want to take home and give some love, not to mention try to decipher its story.

Last month Hadsel brought the serendipitous find — for which she paid $500 plus commission — to Burlington City Hall to officially unfold it in Contois Auditorium. The curtain is 18 by 15 feet, and her living room just isn’t big enough, she says. Hadsel knew that the curtain’s artwork depicts a scene, both real and fanciful, from Church Street. The real elements: Bruhn Office Equipment (owned by forebears of Preservation Trust of Vermont executive director Paul Bruhn, who alerted Hadsel to the Maine auction), menswear shop Shepard & Hamelle, and Lippa’s Jewelers, still in business on Church Street today. An ad on an overheard blimp in the painting touts the Vermont Mattress Company. A few ads from businesses elsewhere in Vermont — including St. Albans and Newport — appear on the curtain, too.

The painter would have sold ads into “these different pockets — a flag, a banner, a blimp, a statue,” Hadsel explains. “A salesman would have gone around and sold the ads and, when they were sold, for $5 to $15 each, they’d paint the curtain … One thing I noticed is, there are no telephone numbers on this one,” she adds. “But phone numbers must have come to Burlington by the 1920s.”

Other than the presence, or mention, of the stores, the mural shows “a generic street,” Hadsel says. The fanciful elements in this circa 1930 curtain include a Statue of Liberty and Joan of Arc on a huge horse. Hadsel suggests a local historical society may want to research “what the curtain tells them.”

Another mystery to be solved: how it ended up in Maine. Hadsel explains that scenic curtains were generally made for a specific stage and stayed there. Which is why she’s found so many of them rolled up and stuffed into forgotten theater cubbyholes.

The curtain’s Queen City references piqued the interest of Mayor Bob Kiss; he’s said he’ll make a resolution endorsing it, according to Hadsel. After all, these functional paintings have been recognized as national treasures. If the conservation goes well, this one will be ready to unroll at Contois — where it fits perfectly, Hadsel observes — during First Night this year.

For that to happen, the fundraising must get underway — the restoration will cost about $8000, she estimates.

But the new fundraising campaign is not just for this curtain, which will be restored by Vermont-based conservators M.J. Davis and Suki Fredericks. “Now that we’ve basically finished Vermont,” says Hadsel, “we changed the name from Vermont [Painted] Theater Curtain Project to Curtains Without Borders.”

And with that catchy handle, Hadsel and crew will take on the country: Curtain surveys in Maine and upstate New York have already begun. “We’ll have all of New England done by 2011,” she predicts. “Then we want to go national.”

Meanwhile, the latest acquisition is “folded up and sitting on my dining room table until we can restore it,” Hadsel says. “This curtain is the crowning jewel. I never thought we’d find one from Burlington.”