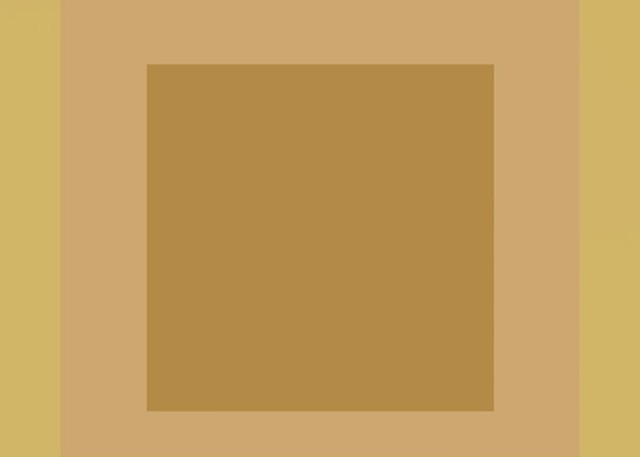 The lifelong credo of Bauhaus artist and teacher Josef Albers was "Minimal means for maximal effect." That motto captures the impact of a selection of original silkscreen prints by Albers that will be on display next week at the BCA Center in Burlington. Rigorously minimalist studies in geometric form and color, these 62 prints created between 1959 and 1972 are mesmerizing as one artist's efforts to sharpen visual experience.

The prints belong to the private collection of local designer Jason Routhier, co-design director with Jeff Holmes of the Burlington design studio RouthierHolmes, LLC; and his wife, Dana Routhier, who directs special projects there. RouthierHolmes is curating the exhibit as part of Design Week, the second annual week of Burlington-centric events organized by the Vermont chapter of the American Institute of Graphic Art.

The studio collaborated on the show with AIGA vice president Alaina Castillo-Kunkle and BCA gallery manager and assistant curator Ashley Jimenez. Burlington's Dostie Bros frame shop., a sponsor, is framing the show. BCA is usually closed Mondays, but it will open for the exhibit's first day and host a public reception on Wednesday evening.

Josef Albers exhibits have been mounted around the U.S. in recent years. His style is back in fashion these days, AIGA president Jeffrey Harkness comments by phone: "It's the blockiness of the work, the colors — they seem to be on trend with what's happening today."

Dana Routhier notes in an email, "Albers is an important artist for so many of us in art and design fields. His work epitomizes the Bauhaus aesthetic of breaking everything down to its simplest form."

Albers (1888-1976) came to the Bauhaus — the experimental design school founded in Weimar, Germany, in 1919 — within a year of its opening and stayed until the Nazis closed it in 1933. He began by studying color, printing, furniture making and glass-making, and was soon teaching that last subject.

After director Walter Gropius talked the artist into teaching the school's foundation course, Principles of Craft — mainly because Albers came from a family of craftsmen — Albers revamped the course and renamed it Principles of Design. That course became central to the Bauhaus education.

When Albers fled Germany in 1933, along with his colleagues Wassily Kandinsky, Paul Klee, Gropius, Marcel Breuer and other luminaries of modern art and design, he became one of the principal disseminators of Bauhaus ideas in the U.S.

Albers taught at Black Mountain College near Asheville, N.C., for 16 years and then at Yale University, where he chaired the department of design from 1950 to 1958. In the course of that teaching, he proposed theories of color that impacted artists for decades. (Albers' students included Cy Twombly, Robert Rauschenberg, Richard Serra and Eva Hesse.)

One of Albers' theories was that the perception of a color is influenced by the colors around it. He began to explore that idea in the '50s in his most famous series of paintings, "Homage to the Square," compositions of offset concentric squares in three or four colors each.

Albers embodied his theories in two bound volumes of color plates titled Interaction of Color (1963) and Formulation: Articulation (1972). The BCA exhibit's name, "Formulate // Articulate," is derived from the latter title. While both tomes are still taught today and are available as book reprints (not to mention apps), they were first produced as portfolios in limited silkscreen editions.

The BCA show will display the Routhiers' Albers originals, among them 26 prints from Interaction and 14 from Formulation. Because the latter collection includes 40 years' worth of work, silkscreen prints of Albers' "Homage" series and his 1947 series of oil studies, "Variant," also appear in the exhibit.

Dana Routhier writes in an email that the "Variant" series particularly interested her husband and Holmes. It arose from Albers' experience of viewing adobe architecture during a trip to Mexico, yet it incorporates his mathematically precise geometric forms. "There's a lot of energy captured in that compositional tension between environmental influence ... and the very rigid rules and mathematics Albers employed in his studies of form and color," Routhier writes. "For us, that tension is something we're working to engage all the time in our work as designers."