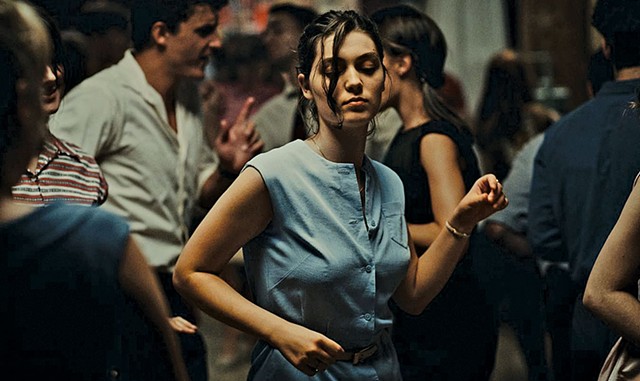 Audrey Diwan's film Happening (L'Événement), which won the Golden Lion at the Venice International Film Festival in 2021, hit U.S. theaters in May, about the same time newsrooms got wind of the leaked document revealing the U.S. Supreme Court's draft decision to overturn Roe v. Wade. Yet this timely French movie about a young woman seeking an illegal abortion, based on an autobiographical novel by distinguished writer Annie Ernaux, didn't exactly draw crowds. It was in and out of Vermont theaters in a week.

No, it's not an upbeat subject. But perhaps now, with Roe overturned and people experiencing the consequences of abortion bans, it's time to watch this movie. You can rent it or find it on AMC+.

In 1963, Anne Duchesne (Anamaria Vartolomei), a promising student from a working-class background, is studying for her university entrance exams when she discovers she's pregnant from a brief liaison. Her choice is stark: If she has the child, she will succumb to the "malady that strikes only women and turns them into housewives," as she puts it. Continuing with her education won't be an option.

Anne knows exactly what she wants, but finding it is another matter. France is still steeped in Catholicism. One doctor warns her that by seeking an abortion she's risking her life. Another lies and prescribes her a medication that does the opposite of what she hopes. A desperate do-it-yourself procedure fails. With the clock ticking, Anne turns to a whisper network of fellow students for help.

Try to count on one hand the movies you've seen in which an abortion actually happens. There are plenty in which someone seriously considers the option, only to decide to carry the pregnancy to term (Juno, Knocked Up), and there are plenty more in which the whole conflict is solved by a convenient miscarriage (Citizen Ruth). These movies generally affirm the right to choose, but they only ever depict one choice.

To find filmmakers who dare to venture down the other path, one has to go to the art house for the occasional movie, such as Hal Hartley's Trust or Cristian Mungiu's 4 Months, 3 Weeks and 2 Days. It's a short list, and Happening is a distinguished and powerful entry on it.

Like Anne herself, Diwan doesn't go in for half measures. She doesn't gloss over the physical aspects of the procedure, and viewers may be disturbed by a shot that recalls the most notorious moment of Mungiu's film. But that's kind of the point — to stop cloaking this reality under euphemisms like the film's title (which literally means "the event/happening").

Anne struggles with some guilt over her sexual experience (for which other students shame her), but when it comes to her pregnancy, she doesn't hesitate. "I'd like to have a child one day," she tells a doctor, "but not instead of a life." Her straightforwardness is the film's attitude, too.

Vartolomei is the center of every scene in this almost claustrophobically intimate film, in which Diwan's camera is forever following her or peering over her shoulder. And her arresting gaze and presence make it work. Anne is such a vivid personality, so indelibly herself, that we have a visceral sense of the injustice of laws that turn her into an incubator.

Granted, that reaction might depend on our own previously held beliefs. Diwan doesn't compromise when it comes to affirming the value of pregnant people's bodily autonomy, and even some pro-choice folks might cringe a little at a scene that underlines Anne's determination to take sexual freedom where she can find it. Anne isn't a meek "good girl" who made one unfortunate mistake. She's not afraid to be selfish, and that's what makes her such an exciting and dynamic character to watch.

Most of the movies about getting an abortion are actually torturously detailed stories of the difficulty of getting an abortion. In 2020's Never Rarely Sometimes Always, American filmmaker Eliza Hittman demonstrated how hard it can be to obtain the procedure even where it's legal.

Happening depicts a different reality — one that many Americans are now experiencing. Should she end up in the hospital after a botched procedure, Anne is told, she'll have to pray that the doctors classify her "happening" as a miscarriage, because anything else could set her on a path to criminal prosecution.

France legalized abortion up to 12 weeks in 1975 and expanded those rights earlier this year. Reacting to the overturning of Roe in a June column for Deadline, Diwan wrote: "Where abortion is prohibited, it becomes clandestine. Women do not cease to be free, they put their lives at risk to remain so." Happening offers a painful and prescient reminder.

One Sings, the Other Doesn't (1977; Kanopy, HBO Max, Criterion Channel, rentable): Agnès Varda's classic traces the lives of two French women from 1962 into the 1970s, showing how feminism, the counterculture and reproductive rights transform their lives.

4 Months, 3 Weeks and 2 Days (2007; AMC+, IFC Films Unlimited, Kanopy, rentable): Set in Romania in 1987, when abortion was illegal there, Mungiu's harrowing, thriller-style drama follows a young woman who is committed to helping her friend obtain the procedure.