A Q&A With Cracker's Johnny Hickman 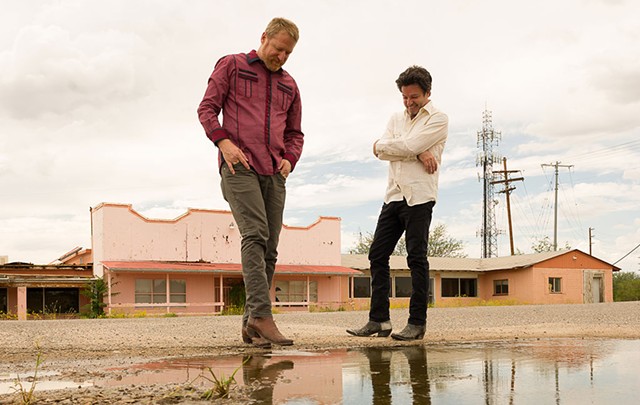 On their latest record, Cracker pulled a fast one. For one thing, that record is actually two records, a double album called Berkeley to Bakersfield. For another, the band, which has built a 20-plus-year career fusing country, punk and Brit pop, made a conscious effort to tease apart its formative influences into two distinctly different-sounding collections. Berkeley is a rowdy amalgam of rock that leans as heavily on founding duo David Lowery and Johnny Hickman's northern California punk roots as it does on their shared affinity for the offbeat work of the Kinks. Bakersfield, meanwhile, is an exploration of and homage to the twangy sounds of that California city and iconic country-music hotbed.

A version of Cracker dubbed the Trippy Trio — that's Lowery, Hickman and Matt "Pistol" Stoessel — will perform an acoustic show at the Vergennes Opera House on Sunday, January 24. In advance of that show, we caught up with Hickman by phone and asked him about the new album, the changing landscape of the music industry and his bandmate Lowery's recent lawsuit with streaming music behemoth Spotify.

SEVEN DAYS: Cracker has always drawn influences from, and merged, rock and country. Why explicitly separate the two for the double album?

JOHNNY HICKMAN: From the very first record, David and I decided not to exclude any of our influences. We both love country, punk, Brit rock. So when we write, it naturally comes in because it's in our DNA. Just before the first record, David had Camper Van Beethoven, which had a good five- or six-year run. And I had been playing up in Bakersfield, after a bunch of punk bands. I just wanted to explore that Bakersfield thing, because country had always been a part of my upbringing. So when we got together, we tried to maintain that the whole way through. And there's a little bit of that on every record.

This time around, David suggested we do two different sets, because it sounded like we had two completely different sets of music. And we recorded them with two different bands, which brought it even more in that direction. So it just naturally went that way. It was a little risky, a little crazy. One, who does a double record anymore? Usually that just means you've got too many songs, maybe enough for one good record. I even think that about the White Album.

SD: Agreed. You've made some notable fans along the way: Tom Petty, the Grateful Dead. What's it like to have artists on that level appreciate what you do?

JH: We've been really fortunate to make those connections over the years that have helped us weasel our way into the business. It's an honor to have people of that caliber into what you're doing. For a band like us, we've never been huge. We're a mid-level, cult-following kind of band, which suits us just fine. We're not making millions, but we make a living and get to do what we love to do.

SD: Speaking of making a living, has there been any movement on the Spotify lawsuit?

JH: That's up and running! We'll see where it goes. I think David took the right approach to do what's right and make sure we get paid, which is basically what it comes down to. You have these streaming companies that are barely trickling down pennies per song to the artist. So someone like Taylor Swift pulls her songs down. She doesn't need the money; it's about the principle. And other people have done it, too. It's just not the way it should be structured.

So what David is saying is that it's not just morally wrong, what they're doing; it's illegal. David has a degree in math and teaches a music business finance course at the University of Georgia. So he put two and two together and realized that these companies are infringing on copyright laws. Some people don't grasp that, yes, music is intellectual property. We invent these songs, they're expensive to record and take time to make, and it shouldn't be free. We will give stuff away, live tracks or a song from a new album that people can download. But that should be our decision, not somebody else's.

SD: It's something I struggle with as a fan. I use and pay for Spotify. And I enjoy it. But when I look at the $10 a month I spend compared to the luxury of having practically the entirety of recorded music at my fingertips, something doesn't add up.

JH: We realize that streaming isn't going away. It's where the industry is heading. The issue is getting to a point with the streaming services where we get a fair cut. If you want to hear our entire catalog, that's fine, as long as we get to wet our beak, as the old saying goes.

I think the solution is in the process of being invented. And hopefully that's what happens as a result of David's lawsuit and other musicians' groups that are trying to get us a square deal. I mean, through the ages there have been companies that don't pay artists their fair share and others that do, and everything in between. That's the way any industry works. Artists have been getting ripped off forever. That's nothing new.

SD: So how do you avoid getting screwed over?

JH: A lot of it is having the right management, people who will watch out for you. In the case of David, he's a sharp man, and not many people can pull the wool over his eyes. Mick Jagger is the same way with the Stones. He went to the London School of Economics, and he's very aware.

More and more, with the DIY way things are now, it's really important to know, or have someone who knows this stuff and can see all of the little sorts of ways money can be taken from you.

SD: In your mind, what are the best and worst things about how the music industry has changed since you first started?

JH: The downside of it is that people don't seem to have the same respect for the creation of music that they did. I think it's become more important to be a good live band, which is something we've always prided ourselves on being. Anybody can make a record now. But it takes guts to be a scrappy little band doing your own management, making your own merchandise and going out on the road.

I produced this band in Denver called the Yawpers. They got a deal on Bloodshot Records, and we spent a lot of time trying to make sure they were going be taken care of. But they're doing what they're supposed to do. They're out on the road, playing and playing. And when they get home, they do laundry and get back out on the road. That's how we started. It may cost you a relationship or two, but that's what you do when you perform for a living. You perform, and you better be damn good at it and work hard.

SD: And the upside?

JH: The upside is that artists can do all that themselves. Most young artists I know are relatively savvy when it comes to promoting themselves, booking, all of that. They realize that they can create their own careers. And I think that's fantastic. That's what happened in the beginning of indie rock, which is where it all came from. Bands like Camper Van Beethoven, the Meat Puppets, that labels didn't know what to do with, they did it themselves, before the internet, printing their own fliers and T-shirts. It's the same thing today, the DIY approach to create your own career from the ground up. That's how the Cracker-Camper Van Beethoven legacy started — David writing to labels like SST and asking, "Well, how do you do this?"

The original print version of this article was headlined "Drawn Together, Pulled Apart"