A Produce Buyer Weighs in on Local Options for Winter Eating 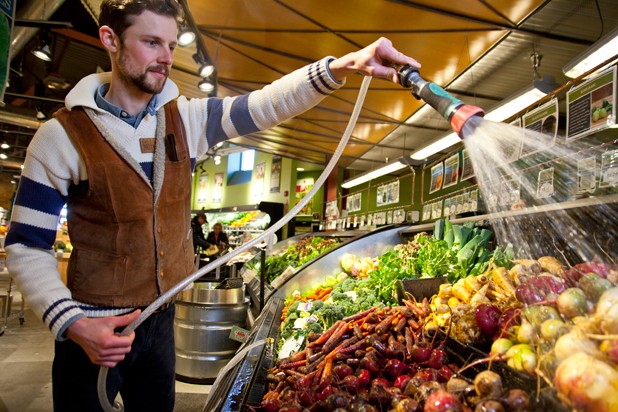 The locavore movement has made pretty serious inroads in Vermont: Grocery stores proudly promote the local provenance of their wares, and many residents are willing to pay a little more for food that’s local, organic and sustainably raised.

But even the most devout Vermont locavores must annually confront a thorny dilemma: winter. The recent subzero snaps have underscored the fact that, for a good portion of the year, eating locally requires creativity — and some sacrifices — in the kitchen. What’s a local-food lover to do when the temperatures make even the kale plants quiver?

Narayan Plasha, 35, is the weekend supervisor of the produce department at South Burlington’s Healthy Living Market. He has spent most of his professional life in the natural foods field — including working on organic farms in Hawaii and upstate New York. He communicates weekly with growers and distributors of local produce and may bear partial responsibility for some of the meals you’ve eaten recently.

Plasha, who lives in Charlotte, understands better than most people how a Vermont deep freeze can affect gustatory habits. Nevertheless, he says, “My basic perspective is that we’ve got it really good in Vermont as far as food availability goes, for being in such a cold, northern climate.”

Purchasing produce is Plasha’s job, but eating it is his pleasure. During an interview at the store, his eyes light up when he speaks of local apples, carrots and arugula. In an email later, he singles out the unsung scarlet turnip as a particularly good option for wintertime roasting. The simpler the preparation of such root veggies, the better: oil, salt and pepper. “Sometimes I sprinkle in rubbed sage or dried rosemary,” Plasha adds, “but not if I want to connect with the essential flavor of the vegetable, like when I’m preparing it for the first time.”

The year-round abundance of good produce is partly due to a “vast array” of such root vegetables, Plasha says, and notes that Healthy Living sells four or five varieties of turnips alone. Roots store well, and fall crops can be sold with no appreciable loss in quality through the following spring, even early summer.

So it’s not that big a deal to find, say, locally grown carrots on grocery shelves in January. What’s more remarkable is that some of those carrots are still available in June, long after being harvested. “It’s just incredible that we have that potential here,” Plasha says.

The same holds for local apples. Some Vermont orchards — Plasha mentions Shoreham’s Champlain Orchards — have “pretty sophisticated storage facilities” that enable them to deliver one season’s crop of apples to local stores right up until the next year’s harvest. That means the apple you eat in May might be several months old.

Plasha admits he can taste a bit of a difference. Still, he says, “From my standpoint, it’s better eating than anything coming from New Zealand or Washington or South America. I prefer the local apples, whether the quality is high or mediocre.” He singles out Dwight Miller Orchards of East Dummerston as having particularly delectable fruit.

His employer, Plasha notes, is committed to offering as much local produce as possible. “It’s our primary concern,” he says. “We will even sell the local option because it’s local, even if it’s going to be at a higher cost.”

During the colder months, though, certain crops are simply not available locally, and that’s when Healthy Living and other grocers have to fill the gap with produce from other states and countries. “I’m amazed that we sell as many organic berries as we do in the winter,” Plasha remarks, “especially because the prices are so high.”

Still, the produce buyer knows when it’s not advantageous to “push our luck,” as he puts it, citing stone fruits as a prime example. “Somewhere in the world, they’ve got fresh peaches and plums right now, but they’re probably conventional, and we just choose not to sell those,” Plasha says. “And I think customers accept that.”

Even though wintertime is citrus time, Plasha finds that, aside from such popular items as navel oranges and satsuma tangerines, “some of the other citrus gets ignored.” The store has a hard time moving such fruits, despite their seasonality.

If you’re curious about the taste of some oddball citrus fruit, or any other item in the produce department, ask for a sample, Plasha advises. Most customers don’t know this is an option, but many produce merchants will let you try a slice of that weird yellow thing next to the pineapples.

So when summer’s bounty is unavailable, what do customers buy? “Warming foods,” says Plasha: butternut and delicata squash; root veggies such as carrots, potatoes and sweet potatoes; and greens such as kale and arugula. The latter, Plasha speculates, feels “warm” due to its spicy bite. “And ginger. We sell tons of ginger in the winter,” he adds.

To continue growing certain hardy crops during the winter, some commercial growers use greenhouses or hoop houses. Even with such measures, though, as Plasha notes, “There’s only so much sunshine.” The crops in such facilities may not die, but they may not do much growing, either.

A Vermont winter is a serious thing. The U.S. Department of Agriculture occasionally publishes a resource called the Plant Hardiness Zone Map, which breaks down the geographical regions of the country by their average annual extreme minimum temperature. The entirety of Vermont is covered by zones 3b to 5b, which means that, on average, state minimum temperatures in the winter range from minus 10 to minus 35 degrees Fahrenheit. That’s pretty damn cold for a human, but at least we can put on layers and turn up the thermostat. The chill is lethal to most crops.

Susan Littlefield, the horticultural editor at Williston’s nonprofit National Gardening Association, says that the Plant Hardiness Zone Map is a useful document, but it’s more relevant to perennials than to annuals like most food crops. More important, she says, is the duration of a region’s growing season, defined as the span between the spring’s last frost and the fall’s first. According to data compiled by the National Oceanic and Atmospheric Administration, most of Vermont is frost free only from late October to early May. “That’s why, commercially, no one’s growing watermelons in Vermont,” says Littlefield.

Could hydroponically raised produce fill in the gaps in the produce calendar? “That’s not happening,” Plasha says. “Not yet, anyway.” At the moment, he explains, hydroponic produce occupies a niche, but the process is too complicated and costly to address cold-weather fruit-and-vegetable needs in any broad-based way.

In any case, he says, only one local company — Vermont Hydroponic Produce in Florence — can provide such produce in any significant volume. Plasha calls its tomatoes “good enough, and local, so people are excited about that, even though it’s not a field-grown tomato … There’s a large portion of the year when we’re featuring their tomatoes, and those are selling better than most of the organic tomatoes that we have.”

Plasha has been working at Healthy Living for five years. In that time, he’s seen patrons’ “food consciousness” change, he says, to the point that some customers seek out specific foods from a particular grower and no other. Like sports fans, Plasha says, “They know who they like, and they stick with it.”

On the other hand, some customers still have trouble with the fact that every crop is, well, seasonal.

“Cilantro is something we try to have every day of the year,” Plasha says, “but there are occasions in the winter when our distributors don’t have cilantro. We can’t buy it from them, so we can’t sell it to the customer.” A couple of weeks ago, one customer refused to accept this and asked every single employee in the produce department where she could find the cilantro. “Even after getting every no, she just kept asking,” Plasha notes with a laugh. “She was convinced that somebody had it on a cart, or it was in the back or something.”

Such an attitude is understandable, he grants. Big-box supermarkets have made it their business to have all foods available at all times, so American consumers have gotten used to an unending abundance of produce. Even in an epicenter of the locavore movement, apparently, that expectation is difficult to overcome.

The original print version of this article was headlined "Produce Pangs"