A Pregnant Reporter Takes in an Exotic Male Revue 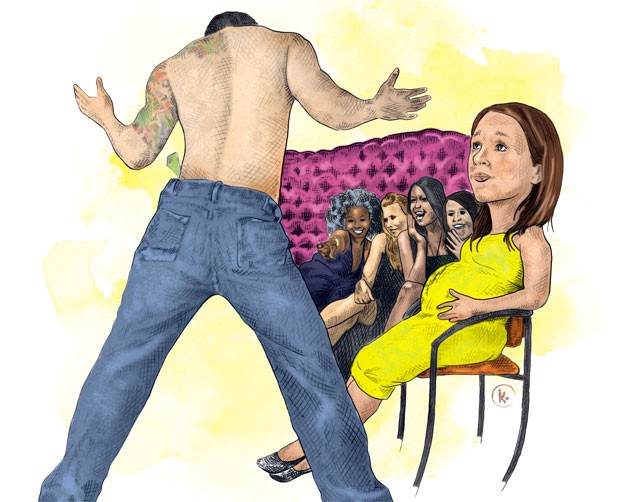 “Are you going to behave?” the bouncer asked while checking our IDs at the door.

“Wait,” I said, handing a young woman my $12 cover fee, “I thought misbehaving was the point?”

It was Friday night, and I had come with two friends, Sarah and Shayla, to Venue, a South Burlington nightclub tucked behind the Dorset Street Blue Mall, for an evening of “male exotic entertainment.”

“No touching,” warned the bouncer. “Otherwise you’ll end up like her.” He pointed to Sarah, who is eight and a half months pregnant. Too late, I thought. I’m already pregnant, too.

It had been months since I’d been able to keep my eyes open past 10 p.m. Now, a few weeks into my second trimester, I was ready for an adventure. I liked the idea of someday telling my child that while he or she was in utero, we went to a male strip show together.

Still, the idea of watching strippers while pregnant was a little weird. Mostly because, well, we couldn’t get drunk. We were curious: Would an exotic male revue be bearable sober? Luckily, we had nonpregnant Shayla to take some whiskey for the team and serve as the control group in this experiment.

Venue was a Colchester haunt until it relocated and expanded last spring to a former Chinese restaurant in South Burlington. The place can now fit up to 800 people, but its low ceilings give it a cavelike feel. After checking our coats and browsing a sex-toy display table, we spotted two bars and a grill serving up hot dogs and Buffalo wings.

Venue usually books local musicians, but twice a year it hosts a special “ladies’ night.” Tonight we’d be treated to the pelvic stylings of Men in Motion, a Boston-based band of burlesque beefcakes.

We made our way to the cabaret tables set up around the small, carpeted stage. Most of the seats had been snatched up already. (Doors had opened three hours earlier, and it appeared many ladies were about that far into their pregame.)

The crowd included women of all ages. “It’s a funny combination of L.L.Bean and Forever 21,” observed Sarah, scanning the room. To our left were two thirtysomethings in knee-high, fur-lined stiletto boots. Beside them was a trio of gray-haired women — one of them, Shayla keenly noted, looked like the kind of wholesome granny type you might encounter in the bulk-foods aisle of the co-op.

While Shayla sipped her Maker’s Mark and Sarah and I worked on our extra-large glasses of ice water, a guy straight out of “Miami Vice” — pale-blue blazer over a crisp, white shirt; slick, styled hair — cruised the crowd, selling tickets for “the hot seat.” Ten dollars bought the privilege of sitting onstage while the guys “danced” around you. Figuring this was a once-in-a-lifetime opportunity, I forked over the cash.

And then the show runner, a muscular guy who’d been weaving around tables breaking tens and twenties into singles for G-string stuffing, slapped my butt. It was mildly shocking at the time. A couple of hours later, the gesture seemed almost quaint.

The show was scheduled to start at 9, but it was almost 10 by the time Brett, the butt-slapping alpha male, got things rolling. By way of introduction, he asked the crowd if we knew the three magic words of the night. “Take! It! Off!” everyone shouted. Except the rambunctious girls behind us — I’m pretty sure they were screaming, “Take it out!”

Brett continued to rile us up by singling out audience members and asking for other magic three-word combos. “Hot sweaty balls?” one woman offered tentatively into the mic.

Brett was attractive, but he would have been a lot more so had he kept his mouth shut. Even rippling abs and hot buns can’t save a guy who says stuff like “Put your money right in there next to the winky.”

My friends and I were under the impression that the hot-seat gag would be a relatively small portion of the night; the rest would be choreographed dancing and Magic Mike-style stripping. But the hot-seat thing wasn’t a gag at all — it was the entire show.

Brett called the hot seaters in groups of five or six. Thankfully, I was in the first group, which was somewhat tame. The dancers got progressively raunchier as the show went on.

I took my seat at the edge of the stage and waited for the dudes to emerge. Only one did, and it was Mr. Miami Vice, now dressed as a cop, a flashlight in his fist, a gun in his holster. After briefly strutting his stuff onstage, he slipped the butt of his flashlight into the considerable cleavage of the woman next to me. Then he grabbed another hot seater, patted her down and bent her over her chair.

I escaped the hot seat having endured nothing more dehumanizing than being lifted into the air and spun around, and then having the cop shake his groin at me. I didn’t want to just sit there like a goober, so I gave his butt cheeks a good squeeze.

As the show wore on, we saw all the familiar male-stripper tropes: a cop, a cowboy, a gang of “bad guys” — including an awkward, doughier young dude Brett described as “my little brother” — and then … a “chocolate Chippendale.” “What’s he supposed to be dressed as?” my friends asked, gesturing to the African American dude in the unremarkable outfit. Uh … a black guy?

Mr. Chocolate was a crowd favorite. He made his slow, moody entrance to Usher’s “U Got It Bad.” It was unclear if he was actually singing, but one thing was for sure: This guy could dance. “What is he doing with the rest of these clowns?” asked Sarah. He was all muscle as he maneuvered hot seaters into various acrobatic sex positions, lifting them up by their legs as they gripped the chair backs, and piling them on top of one another like Jenga bricks.

The devil was in the details with this guy. He mimed a few tricks that were so graphic I’m actually embarrassed to describe them here. Let’s just say, one idiosyncratic move involved licking his thumb before plunging it violently into an imaginary orifice.

Near the end of the night, the consensus in the ladies’ bathroom was that the show had been better when Venue was in Colchester. As for my friends and me, we were satisfied but bewildered. Wasn’t the point of a strip show to objectify the strippers? Why did it feel like the hot-seat ladies kind of got the shaft? Why all the ramrod railing? Why couldn’t the guys just dance suggestively like Channing Tatum?

When one of them did, alone, on a white-tiger-print blanket, it was the hottest thing we saw all night.

Around midnight, with no end in sight for this exotic dance revue, we decided we’d had enough. We’d all had a great night, but this pregnant lady had something much sexier on her mind: sleep.