A Powerful HBO Doc Explores What Happened 'In the Shadow of the Towers: Stuyvesant High on 9/11' | Movie+TV Reviews | Seven Days | Vermont's Independent Voice

A Powerful HBO Doc Explores What Happened 'In the Shadow of the Towers: Stuyvesant High on 9/11' 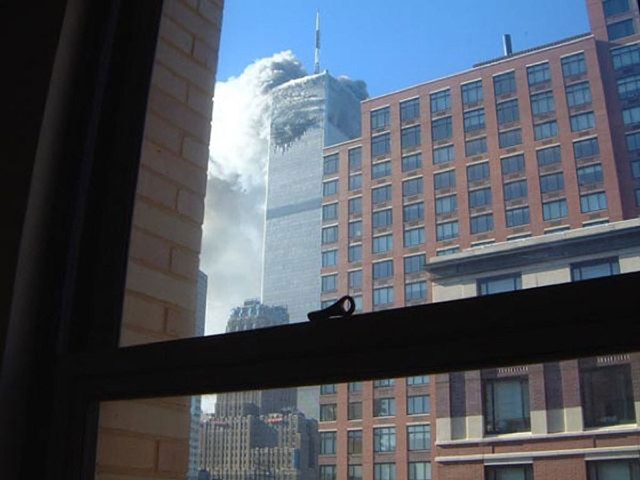 Many movies have been made about the terror attacks of September 11, 2001. Eighteen years after the atrocity, can there really be anything new of significance to say? As it happens, there can. And what's poignantly significant about it is that the men and women saying it were just boys and girls that day.

The new HBO documentary from director Amy Schatz ("Song of Parkland") revisits that morning through the eyes of eight former students of New York City's Stuyvesant High School. Weaving archival footage together with present-day news video and interviews, the film evokes the shock, panic and out-of-body horror experienced by these young Americans who were beginning their day four blocks from ground zero.

To grasp the magnitude of their trauma, one should probably consider how it must have been at such a tender age to pledge allegiance to the flag, then glance out the window and watch a passenger jet pierce the north tower. Several interviewees did that and recall it here, along with the difficulty their minds initially had processing the sight. Two young men remember thinking a missile must have gone off course, and then recognizing the tail of a plane as it disappeared into the building.

Today, of course, schools routinely conduct drills to prepare students for the possibility of attack by a shooter. When I was a kid, we still practiced the old "duck and cover" in the daft belief that our desks would protect us from nuclear Armageddon. Was there any way in a million years these kids could have prepared for the carnage and destruction that rained down on them?

As interview subjects recount the sequence of the day's events, the viewer gradually realizes that the Stuyvesant staff was as shocked and confused as their charges. At first, everyone was instructed to stay put. After the second plane hit, the doors were opened, and students were essentially told to run for it.

And what a waking nightmare they describe encountering. These children emerged to the sight of human beings leaping from flame-gushing windows. They zigzagged among falling debris the size of freight trucks. When they finally arrived at their subway stops, they found them closed. One witness compares the giant dust clouds that chased them to the CGI sandstorm in one of the Mummy films. Tellingly, virtually all recall feeling like they were in a movie.

In the picture's final section, the filmmaker deftly ties the historical moment to more current events. Interview subjects come from a variety of immigrant communities and backgrounds. They describe experiencing firsthand the backlash against anyone who had brown skin, in some instances that very day. Several were accosted as they struggled to reach their homes in the city's outer boroughs.

In the Shadow of the Towers: Stuyvesant High on 9/11 issues an eloquent wake-up call on at least two fronts. First, from the Muslim immigration ban to the border crisis, things keep getting worse in this country for people with brown skin. Then there's the staggering fact that Taliban leaders were invited to Camp David days before this year's September 11 anniversary. (The meeting has since been cancelled.)

"Those who fail to learn from history," Winston Churchill warned (paraphrasing George Santayana), "are condemned to repeat it." Paraphrasing Churchill, one might suggest today that "Those who put al-Qaeda allies on planes aimed at America should be condemned — at the very least — to repeat high school history until they have a clue."

The original print version of this article was headlined "In the Shadow of the Towers: Stuyvesant High on 9/11"