A Play About Returning Soldiers Keeps It Real 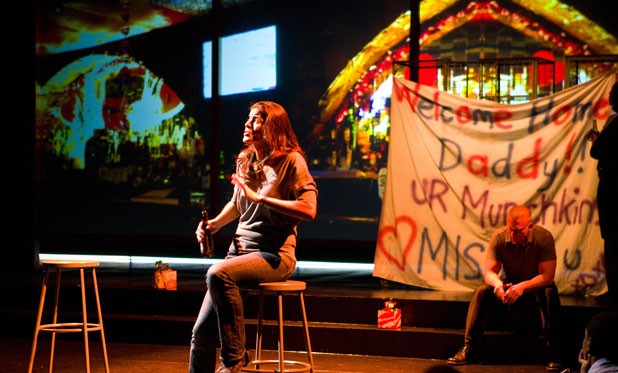 In the wake of a U.S. soldier’s recent shooting rampage in Afghanistan, the gap in understanding between those who serve in America’s wars and those who stay home feels wider than ever. For the past three years, actor-playwrights KJ Sanchez and Emily Ackerman have attempted to bridge, or shrink, that gap with ReEntry, a powerful play about returned Marines, which is coming to the Hopkins Center next week.

Each line in ReEntry is culled from hundreds of hours of interviews the two women — both sisters of veterans — conducted with Iraq and Afghanistan vets. The characters, revolving around a family of two Marine brothers and their sister and mother, speak directly to the audience. “You want to know what it’s like to come home?” asks Charlie, an enlisted Marine. “Uh, you want the good side or the dark side?”

Depending on audience response, “it’s a little bit of a litmus test every time,” says Sanchez, ReEntry’s director and one of its five cast members. “Don’t be afraid of the play,” she advises. “There’s no wallowing — like, Oh, our situation is so harsh.

ReEntry does address some harsh themes. One is the Marines’ culture of fierce familial support and zero self-pity, which sometimes interferes with returnees’ need to seek therapy. Some elements of this “documentary theater” piece are expected: the proliferation of F-words, wives’ confessions of hiding tearfulness behind a façade of fortitude. But it’s full of surprising, moving moments, as when a commanding officer recalls another C.O.’s decision to stay beside a dying Iraqi boy.

There are plenty of funny lines, too. One enlisted man describes Marines as so proud they’ll insist a missing arm is just a flesh wound.

Sanchez wanted to keep the production’s look as close to reality as possible. “When you spend time with anyone in uniform, [you realize] there’s a particular way they need to be represented,” she explains. “They talk about what they do without emotion, because it’s their daily job. They’re very poised, very reserved. When they talk, they don’t gesture with their hands, because … if you’re waving your hands around, you might get shot by a sniper.”

Accordingly, the actors, who have all been with the production since its premiere in a slightly different form in 2009, have had to adjust their approaches. At first, says Sanchez, “they did what actors do, which is try to make it as dramatic and emotional as possible.” Now, when the cast performs for Marines — it has toured more than 30 military sites — most are “surprised that none of the actors has spent any time in service,” she notes.

Sanchez says all that interaction with Marines has changed how she and Ackerman see the play’s purpose. When they set out to write it, she recalls, “We were thinking about what we thought and felt about our subject matter. It didn’t dawn on me that the much more interesting question was What do they think about us?”

The Hop audience will likely include Dartmouth’s and Norwich University’s ROTC programs and the 20 or so members of the Dartmouth Undergraduate Veterans Association, according to Hop publicity coordinator Rebecca Bailey. One 26-year-old vet, a junior named Jacob Sotak, will participate in a related roundtable discussion with Sanchez and author Nancy Sherman, titled “Fallout: What We Think About the Military Matters,” which is open to the public.

Among civilian audience members will be a contingent of Dartmouth medical students and staff from the White River Junction Veterans Affairs, Medical Center, organized by VAs oncologist Dr. Joe O’Donnell. ReEntry will be central to this group’s training and work: The VA serves as headquarters of the U.S. Department of Veterans Affairs National Center for PTSD. That’s due to the role of Dartmouth med-school psychiatry professor Dr. Matthew Friedman, the NCPTSD’s executive director, who, says O’Donnell, “put PTSD on the map.”

Iraq and Afghanistan vets are different from older patients at the VA, notes O’Donnell: Their advanced body armor enables them to survive IEDs, “but with their brain shook up.”

As the C.O. in ReEntry observes, “I think we all come back with some amount of post-traumatic stress disorder. You can’t not.”