A Photographer Is "Banned" for Taking Pictures on Church Street 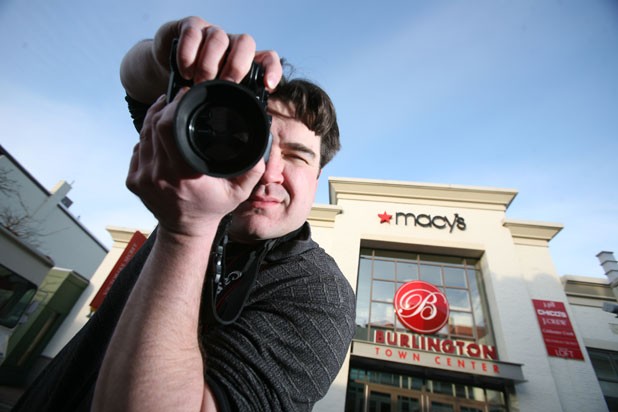 To some, Dan Scott is an artist who exercises his First Amendment right of free speech by photographing people in public places. To others, he’s a creepy voyeur whose surreptitious shutterbuggery makes some people, especially young women, uncomfortable. So much so, in fact, that last week Burlington police issued him a trespass order barring him from dozens of businesses on the Church Street Marketplace.

Scott’s case raises a fundamental question about civil liberties, artistic expression and the reasonable expectation of privacy in public places: Is it right, or even constitutional, to prevent someone from transacting business in downtown Burlington, not because he’s been convicted of any crime, but simply because someone finds his behavior rude or “unsettling”?

Scott, 32, is an art photographer from St. Albans who works full time at the U.S. Social Security Administration office on Pearl Street. For the last year or so, he’s spent many of his lunch hours shooting artsy, black-and-white photos of people on Church Street: homeless people, the elderly, families with children, anyone who catches his eye. He insists that all his photos are taken on public property, not inside stores or through the windows or blinds of private homes.

Occasionally, Scott asks his subjects’ permission to be photographed. “And if they tell me ‘no,’ I go away,” he says. However, he admits that much of the time, his pictures are candid shots taken from a distance with a telephoto lens so his subjects aren’t aware they’re being photographed.

Over the years, some of Scott’s photos have been published in local publications, including the Burlington Free Press and Seven Days. However, most are taken for fun, not for profit, he claims, as a way of developing his photography skills.

“Look, I’m not doing anything to try to embarrass people or demean them,” he says. “I’m just trying to capture the human condition as it presents itself in the marketplace.”

Scott claims his troubles began on January 26 while he was shooting pictures outside the Burlington Town Center. As he tells it, a mall security guard came outside and told him that he wasn’t allowed to take pictures of the mall. Scott informed the guard that, in fact, it’s his constitutional right to take pictures on a public street, regardless of what’s in the background. The Burlington Town Center’s general manager later confirmed that the mall’s no-photography policy only applies to its interiors.

Shortly thereafter, Scott recalls, two Burlington cops questioned him about who he was, where he works and what he was doing there. “I said, ‘I’m not doing anything illegal. This is pretty much protected speech,’” he says.

But the following day, Scott reports, another Burlington cop showed up at his office and questioned him for 45 minutes. He claims that officer asked him what kind of pictures he takes, whether he photographs young children, and if he ever posts those pictures on the Internet. Scott told him that he occasionally takes pictures of families with children, and sometimes posts them on Flickr, a website for photography enthusiasts.

“He thought that was just despicable,” Scott notes.

About a month later, during a February snowstorm, Scott shot some pictures of a woman smoking a cigarette outside Uncommon Grounds on Church Street. Scott claims he was about 50 feet away when the woman, an employee of the coffeehouse, noticed his camera and asked him not to take her picture. Scott claims he backed off. But the woman also asked Scott to delete the pictures he’d already taken of her. He refused. The following Monday, March 1, a Burlington police officer again showed up at Scott’s workplace, and this time issued him a one-year universal trespass order that bans him from 67 establishments on the Church Street Marketplace. If Scott enters any of them, he could be arrested.

“We’ve had a problem with him a number of times before — taking pictures of women, specifically, on the sneaky side of things — without asking their permission,” she says. “A number of customers have come in and said, ‘There’s a guy out there taking pictures and it’s really creeping us out.’”

Bethel confirms that Scott didn’t enter the coffeehouse to take pictures, nor does she describe his pictures as “lewd.” Nevertheless, she says, Scott’s persistence and demeanor were “unsettling” to her and other employees.

“For the young women around here, it felt really uncomfortable, someone kind of lurking about, and then quickly taking their picture and turning away,” Bethel says. Moreover, when someone asked Scott what he was doing, she claims he became defensive and argumentative.

“I got scared, actually, because he got really aggressive with me, not physically but verbally,” she states.

Brenda Vinson, whose family owns Uncommon Grounds, confirms that this wasn’t an isolated incident. She says several of her employees and regulars have tried, unsuccessfully, to speak to Scott about his photography.

Lieutenant Jen Morrison with the Burlington Police Department says she’s not at liberty to discuss the details of Scott’s trespass order, or even confirm that he was issued one. Oddly, it’s not because there’s a criminal investigation pending; Scott hasn’t been charged with a crime. Rather, she explains, it’s because the police don’t decide whether to issue trespass orders; they simply issue them at the behest of businesses and property owners.

Supporters of the universal trespass policy say it’s been an effective tool for reducing petty crimes and minor disturbances on Church Street, primarily shoplifting and disorderly conduct. Reportedly, it has cut down on the number of repeat offenders police have to contend with, while also serving as a powerful deterrent to would-be thieves and troublemakers.

Morrison declined to offer an opinion on the delivery method: a police interrogation at the offending person’s place of work.

“We can argue both sides of that until we’re blue in the face,” Morrison says. “The bottom line is, if a business owner requests that we issue a notice of trespass, we’re OK with that. We don’t require that an illegality happened.”

Ron Redmond, executive director of the Church Street Marketplace, defends the practice of barring people from stores when conduct has “crossed the line.”

“There are lots of people on Church Street doing lots of things. It’s organized chaos and it’s wonderful,” Redmond says. “But when there are times that people express behavior that’s inappropriate or makes people feel uncomfortable, then it’s the time to act, given our culture and society and all the things we’re learning about healthy choices.”

David Mindich, who chairs the journalism department at St. Michael’s College in Colchester, calls that approach “blatantly outrageous … Some guy who is exercising his First Amendment right to take pictures in a public place is being punished for it. That’s about as fundamental a right as I can imagine. I have no idea what could be the possible justification.”

Mindich admits he may not be the most unbiased person in this situation; Scott was one of his journalism students at St. Mike’s. Nevertheless, Mindich is flabbergasted that the Burlington Police Department is essentially validating a ban on constitutionally protected speech.

“Church Street is, by definition, the most public place in Chittenden County, if not Vermont,” he says. “There’s no presumption of privacy. There’s no gray area here.”

Indeed, many downtown businesses have their own street-level surveillance cameras, one of which helped police catch the killer of Michelle Gardner-Quinn, a University of Vermont undergrad who was abducted, raped and murdered in October 2006.

Under the law, surveillance images of public places are not subject to public review, nor do they require anyone’s permission or consent, even if they’re posted online. Why? As Mindich points out, the public has no expectation of privacy when they’re on public property.

Scott intends to a file a complaint with the American Civil Liberties Union of Vermont. “I’ve never had any sort of incident like this before, so it’s a little unsettling for me,” he says. “So much attention for a guy who just goes out and takes pictures.”