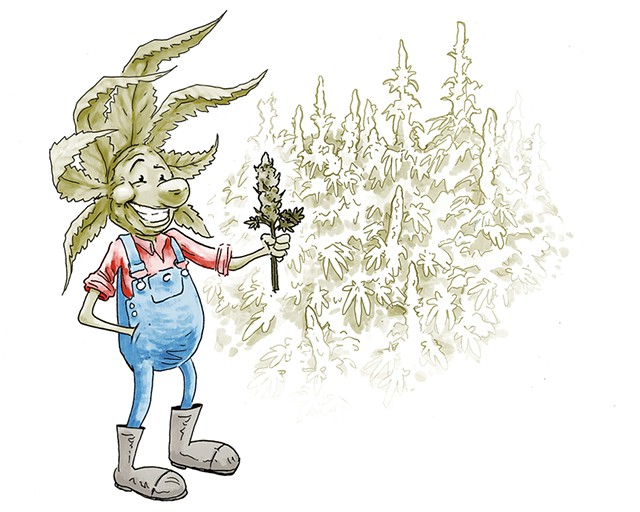 On her remote land in Woodbury, Jezebel Crow wants to start a weed farm.

Crow, who raises goats and works in the Plainfield Co-op's produce department, is like many of the Vermonters seeking to supply sun-grown cannabis to the new recreational marketplace: She has experience growing, little startup cash and serious misgivings about ceding to government regulation.

Nonetheless, Crow set her doubts aside for the chance to cultivate on a commercial scale. In the spring, she applied to the state's Cannabis Control Board for a license to grow up to 125 plants and bought seedlings so she'd be ready for the summer grow season.

"I was just trying to — for once in my life — square up, get licensed, be a good citizen." Jezebel Crow tweet this

Months later, her license still hasn't come through. Between fees and materials, Crow has spent roughly $3,000 with nothing to show for it, save for seedlings that she can't legally use.

"I was just trying to — for once in my life — square up, get licensed, be a good citizen," she said. Instead, Crow said, she got "crushed."

Outdoor cultivators have lined up to participate in the first year of Vermont's retail market. But while many have gotten their licenses and are poised to cash in come fall, dozens remain in legal limbo as the control board — an ill-equipped state agency on its maiden voyage — has struggled to process the flood of time-sensitive applications. Some growers, desperate to salvage what they could of the growing season, started planting while their licenses were pending, a step that is technically illegal and has led to yet more confusion, anxiety and frustration.

Licensing delays may exacerbate an anticipated supply shortage when retail sales become legal in October. To some Vermont growers, the process has already confirmed their suspicions about regulated weed, which could prove a boon to the underground market. "It's the tyranny of bureaucracy," said one recently licensed grower in southern Vermont, who expects to reap only a partial harvest this year because of application delays.

James Pepper, chair of the Cannabis Control Board, has said repeatedly that the board is working hard to make sure entrepreneurs know the rules so they can succeed — which, ultimately, is what the board wants. The rules were written to encourage small cultivators who may have been growing on the black market to go legit. But Pepper acknowledged that the first several months haven't gone as smoothly as he'd hoped.

Outdoor cultivators were expected to produce only a fraction of the weed that winds up on retail shelves, according to a consultant hired by the state, who projected that 20 percent of cultivators would grow outdoors compared to 80 percent indoors. "Instead of 20 percent, it's closer to 60 percent," Pepper said. That shift could impact the state's projections on cannabis supply and lead to a dearth of weed this fall and winter.

Unlike their indoor counterparts, outdoor growers had a strong incentive to apply for licenses as soon as the control board began accepting applications in April and May: the state's short growing season. Most wanted to plant by the end of June to get a full harvest. But as of last week, the board had approved just 87 outdoor cultivation licenses, out of more than 130 applications.

The fault does not rest entirely with the Cannabis Control Board. Its members were not seated until April 2021, months behind schedule, and lawmakers didn't approve the board's full licensing scheme until March of this year. The agency entered the first licensing cycle this spring with what Pepper described as a "skeleton crew," though it has since hired more staff.

The industry was also waylaid by the Federal Bureau of Investigation, which refused to help process background checks for cannabis business owners in Vermont and several other states. The board instead scrambled to find a private vendor who could conduct the checks without access to federal databases. The third-party process is expensive for small growers, at $475 per person, and has tied up some applications for weeks.

Just as significant for small outdoor growers, however, has been the challenge of navigating the myriad requirements to get licensed. A majority of the unfinished applications have been deemed incomplete or had to be resubmitted, data from the control board show. Crow, for instance, said she didn't initially realize that she would need to open a business bank account, and that most banks wouldn't allow her to do so while cannabis remains illegal under federal law.

The control board has exempted applicants from the rules in some situations; it allowed growers such as Crow to proceed with their applications, even without a bank account. Pepper said employees reviewing the applications have been "trying to hold their hand to the extent that we can, recognizing that a lot of these folks can't afford legal representation." It doesn't seem that way to Crow, who has found the process to be "intimidating."

"I just feel like I'm getting elbowed out of the way and marginalized because I'm not a business professional," she said.

One would-be legal grower who spoke to Seven Days said he withdrew his application as delays and seemingly onerous requirements stacked up. He requested anonymity because he hopes to reapply in the future and worried that criticizing regulators would jeopardize his ability to get a license. The grower, who has decades of experience cultivating for the underground market, said he was particularly frustrated that some applicants got licensed in time, while he felt "chewed up and spit out."

Some in the industry say the frustrations stem in part from unrealistic expectations. The state law that set up Vermont's recreational market did not establish a timeline that would have enabled all outdoor growers to plant in time for the fall launch, said Geoffrey Pizzutillo, cofounder and executive director of the Vermont Growers Association. The law did explicitly allow existing medical dispensaries, which in Vermont are corporate-owned, to begin growing in February for their future recreational retail operations. A "producer-friendly regulatory framework" would have allowed independent cultivators to apply for licenses in January, Pizzutillo said.

"This is very much an abbreviated year," he said.

"Obviously, if we get some cold weather in September, we're probably in trouble." Kristin Sheperd tweet this

Some of Pizzutillo's members received their licenses but opted to delay planting until next year rather than risk a small harvest during an uncertain season. Other outdoor growers, such as Kristin Sheperd of Take-a-Toke Acres in Jay, decided that a short season was better than no season, especially with high wholesale prices expected this fall. In early July, the control board approved her license to grow up to 125 plants, and she planted the same day.

"Obviously, if we get some cold weather in September, we're probably in trouble," she said.

Some growers avoided the to-grow-or-not-to-grow dilemma by putting their plants in the ground while their licenses were still pending. Such an approach is illegal under state law, and none of the 30-plus applicants contacted by Seven Days would discuss it openly. A publicly accessible web page for one pending applicant stated that the company had already begun planting. The business owner declined an interview, and the web page later disappeared.

But last week, the control board made clear that it wouldn't penalize those who took that route. At an August 10 board meeting, Pepper told attendees the board would look the other way if applicants planted early, so long as they're otherwise operating according to the regulations.

"If you have a pending application, act and operate like you have a license, and we will, too," Pepper said. He added that to "punish" underground growers who are trying to go legit would run contrary to the board's mission.

The board can overlook such actions in the context of licensing, but growers who plant cannabis before their licenses are issued still risk separate law enforcement action, Pepper later clarified to Seven Days. A county sheriff recently called the control board after receiving a complaint about an outdoor grower who has a pending application, Pepper said. He discouraged the sheriff from intervening and said he is now planning to hold a training session on the issue with police across the state.

The nuance of the board's pronouncement was absent in a recent mass email sent out by the state's largest cannabis law firm, Vermont Cannabis Solutions. "THE CCB SAYS GO AHEAD AND GROW WITHOUT A LICENSE!" the missive read. The email also urged growers — in much smaller type — to call the law firm to discuss "potential risks" of planting immediately. (The firm's founder, Tim Fair, later said the email was intended to caution clients but probably should have been formatted differently.)

Pepper's most recent comments renewed Crow's interest in trying to recoup her investment this fall. At the beginning of August, she had taken up the board on an offer to "pause" her application until next year, when she could resume the process without having to pay another fee.

Now, Crow said, if she can get her license squared away soon, maybe some of those seedlings she bought can make it to the legal market.

The original print version of this article was headlined "Farmers' Dilemma"