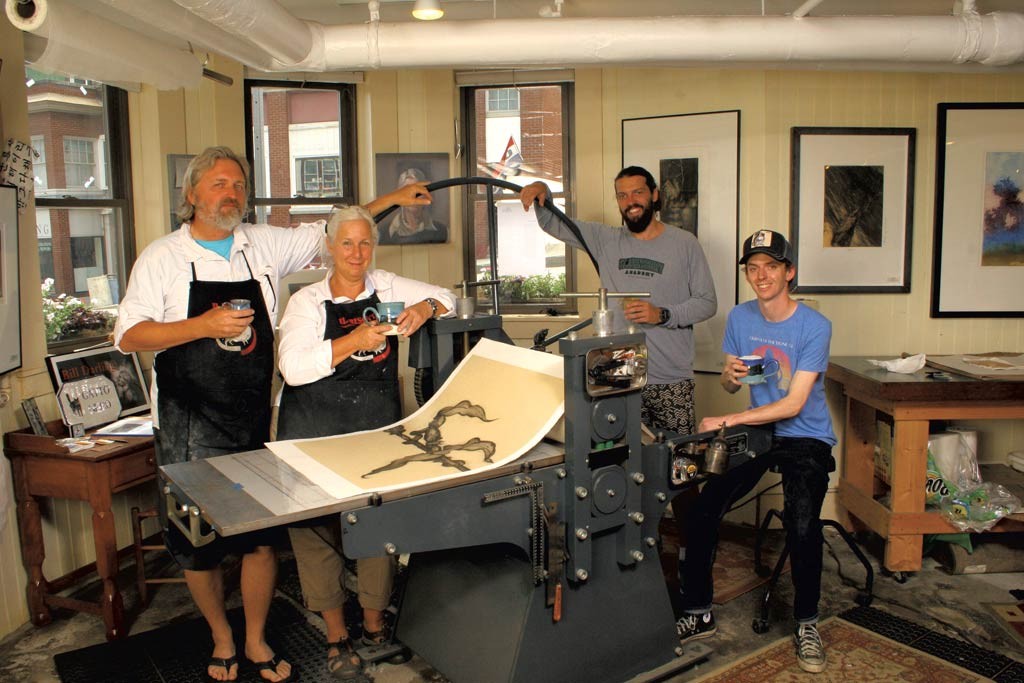 It's after hours on a recent afternoon at 190 Eastern Avenue in St. Johnsbury, and Kim Darling is corroding a plate of copper in ferric chloride. "You can feel this has been eaten away," she tells a visitor, "and when we print, that area will be raised."

The printmaker and longtime teacher at St. Johnsbury Academy is at ease as she explains her art-making process, leading a visitor around Gatto Nero (Italian for "black cat"), the studio she and her husband, Bill Darling, have shared for seven years.

The Darlings are primarily intaglio printmakers, though Kim has a strong sideline in drawing and painting. Intaglio is a method that involves making incisions in copper or zinc plates; the ink settles in the notches. The Darlings make their own plates, coated with wax and then corroded with solutions for texture, and etch them with their finely detailed drawings of animals, architectural structures and figures.

Their studio occupies the ground floor of a beautifully restored 1894 building that's been home to printing presses for more than a century; it was the longtime site of commercial print shop Cowles Press and once housed the Caledonian-Record's press. But now the walls are adorned with the Darlings' prints, drawings and paintings, and in one corner there's a handsome wooden counter made by a local carpenter and lined with stools. There, Matthew Laughton, 32, a St. J native and longtime barista, mans a shiny new espresso machine.

The Café at Gatto Nero, opened just this spring, is one more testament to the evolution of St. Johnsbury's burgeoning arts community.

Laughton co-owns the café with Florian Rexhepi, a colleague of the Darlings at the Academy. The idea for the coffee shop came from Rexhepi, who missed the casual, creative café environments of his native Eastern Europe. "He felt like St. Johnsbury needed a community place, a place where people could just relax and sit for a while and have coffee and talk," recalls Kim. "He felt that was missing from his life here, so he decided he had to build it!"

The Darlings connected Rexhepi with Laughton, and they hit it off. "It all happened really quickly," Kim says.

The four friends anticipate that the combination of art and caffeine will encourage creative types to gather in the space. They're already seeing signs of it. Just the other day, a pair of cartoonists from Hardwick holed up in the corner for the afternoon to draw and write. The café is already making a small profit, attracting between 40 and 50 customers per day, Laughton says. That's a higher volume than he was expecting in its first months.

Of course, creative people need to be caffeinated — and Gatto Nero adds to the evidence that St. Johnsbury's arts scene is on an upswing. The most urban hub of the Northeast Kingdom has always had a creative base guaranteed by its resident cultural institutions: the Fairbanks Museum, Catamount Arts, the St. Johnsbury Athenaeum and St. Johnsbury Academy. "There's always been an arts interest in St. Johnsbury," Kim stresses. "But it hasn't always been very cohesive."

That seems to be changing. St. J's quartet of arts powerhouses has in recent years made a concerted effort to pool its resources. In particular, the institutions are pushing an "arts campus" concept to encourage tourists and locals alike to visit the exhibits and partake of the programming.

New energy has come to downtown St. J in various forms. Five years ago, musician Neko Case purchased the former Catamount Arts Center, which now houses Dylan's Café, a restaurant with tasty — though pricey for the area — fare and an interior space hung with art, including a wall mural by Kim Darling. Case maintains a studio upstairs. New businesses such as Flex coworking office, Rollickers Bikes & Boards and the expanded Gatto Nero provide hubs for creative types of all ages.

The Darlings, for their part, have been quietly creating professional art in St. Johnsbury since they first moved there more than 30 years ago from New York City. Since the mid-'90s, they've taught art at St. Johnsbury Academy, where they founded the printmaking program and lead regular student trips to Italy.

"They bring a level of excellence to the arts scene," reflects Jody Fried, executive director of Catamount Arts. "They're amazing artists, they're beloved by their students, and they're very focused on what they do.

"The Darlings are professional artists," he adds. "A lot of people who participate in the Art Center are participating at amateur and beginning levels; it's very important to have all those levels in the community."

The Darlings met at the Art Students League of New York and first visited Vermont to paint in the summertime with their teacher, celebrated master painter Frank Mason. The idea of having their kids in a New York City public school in the 1980s, as Bill recalls, prompted their exodus, and they relocated to St. Johnsbury when their first child reached school age. The couple has raised eight children in the area; one of their daughters, Flo, has remained there to teach in the Academy's art department with her parents.

The transition from New York's vibrant arts scene to the Northeast Kingdom, both Darlings admit, was not always easy. "For many of those years I thought we'd been sent to the gulag," Bill jokes — though both say they found inspiration, too, in their community. Frequent travel during their vacations helped.

The Darlings' affiliation with Mason and the Art Students League accounts for the print shop's most unexpected feature: an antique etching press that's believed to be the first ever used in an American art school. "The whole Ashcan School printed on that press," says Kim, referring to the early-20th-century artistic movement known for realistic depictions of New York's poor neighborhoods.

The press was reportedly ordered at the turn of the century by celebrated American etcher and printmaker Joseph Pennell, and then passed among his students over the years. Eventually, it fell into disrepair in a corner of the Art Students League, where it remained until the league's director gave it to Bill Darling as payment for work he'd done.

He repaired it, and when the Darlings moved to Vermont, the press came with them. It now sits in a corner of Gatto Nero and has been in constant use for years. When Bill Darling began teaching at the Academy in 1996, he introduced the school's first etching classes and invited the students to use the historic press.

At the Academy, the Darlings bring their classical training into the classroom, remembers former student Tara Goreau, now a professional muralist and arts educator in Burlington.

"They want to keep a style of drawing alive that goes back to Michelangelo and the Renaissance, where you really look at the light and the form," she says. "It's drawn from the light, and much of modern art doesn't really take that into consideration ... The Darlings just wanted you to step back and really, really look at the form and move around it."

Goreau, 25, offers personal testimony to the expertise that the Darlings draw on to help revitalize St. Johnsbury. "There's not a day goes by when I'm making art that I don't look back at, like, that first year, when I was studying with them," she says. "I don't think I would be an artist if they didn't teach me what they did."