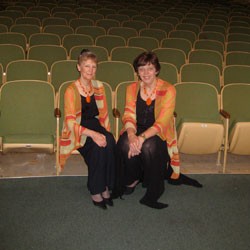 Modern grand pianos, with their cast-metal frames and cross-strung bass notes, offer both concert-hall volume and enormous expressive range. But they became widespread only a hundred years ago. So it’s hard for pianists to know exactly how pre-20th-century composers, many of whom never heard their works played on such powerful instruments, intended their music to sound.

South Burlington pianist Elaine Greenfield has illuminated some of that mystery when it comes to the intimate, lucid works of the French impressionists, a group of late-19th-century composers that included Debussy, Ravel and Fauré. She and her piano-duo partner, Arizona State University music professor Janice Meyer Thompson, decided to play the impressionists on the same type of piano the composers favored: the French-made Erard, which went out of production in the early 1900s.

Greenfield and Thompson, who perform as the Transcontinental Piano Duo, located an 1877 “extra-grand modèle de concert” Erard at the Frederick Historic Piano Collection in Ashburnham, Mass. In a nearby church, where the nonprofit transfers its instruments for concerts and recordings, the duo recorded some of the impressionists’ works for four hands on the restored instrument. French Piano Four-Hands With the Elegant Erard (1877) was released by Centaur in January.

While it’s impossible to cart the Erard they used up to Burlington, Greenfield and Thompson will play selections from the recording on a modern Steinway at St. Paul’s Cathedral this Friday. Dubbed “Steinway ‘B’ (1927) Meets the Elegant Erard (1877),” the concert is part of Cathedral Arts Evening/Weekend Series. Following intermission, the duo’s recording engineer, Christopher Greenleaf, will play excerpts from the CD, and the pianists will repeat them so that audiences can compare the sounds.

“It’s quite a different sound. Do you hear how clear the top [register] is?” enthuses Greenfield, 67, over the sound of the recording. She is seated at one of the two Steinway grands arranged side by side in her living room, where she also gives private lessons. Unlike modern pianos with their uniformity of register, Greenfield says, the Erard has “a different characteristic for each register. The middle almost sounds like a French horn; it almost becomes flutelike. Way down at the bottom, it’s almost like brass.”

That’s because the Erard has a composite metal frame instead of a single, cast piece, and parallel, not cross-strung, strings, according to the piano collection’s cofounder, Patricia Frederick. She adds that the Erard, which was the official piano of the Conservatoire de Paris, has 90 keys rather than the now-standard 88 — two more in the bass. When asked how modern performers handle compositions that include those missing notes, Frederick explains with a laugh that “modern pianos are so muddy in the base, it doesn’t matter!”

The prospect of hearing and watching two people play one piano will be as much of a draw as the concert’s historical aspect. “It’s choreography,” says Greenfield with a smile. “Each person goes into all the areas of the piano, [so we’re reaching] above, under, everything. Each time we play together, it’s like relinquishing your space.

“But it has to sound like one pianist,” she adds, “so you have to agree on what you’re getting — articulation, dynamics, etc.” Thompson and Greenfield have had lots of practice: They met at Vermont’s Adamant Music School in 1990 and began playing four-hand two years later. French Piano Four-Hands is their third recording together.

Greenfield, who has also recorded solo Debussy preludes on a 1907 Blüthner and performed Brahms on an 1846 Streicher, is interested in the insights historic pianos can give into composers’ intentions. “It informs you and lets you know what you’re striving for, because that’s what the composer heard,” she explains.

But she’s hardly the piano-playing equivalent of a Constitutional originalist.

“What you bring to it [as an individual artist] is really important,” Greenfield declares, citing virtuoso Glenn Gould as someone who “broke all the rules” in a way that was always really interesting.

“Composers just give you the music to work with,” she says. “If you listen, you know what to do.”