A One-Woman Show at Lost Nation Explores Dating . . . and Shoes 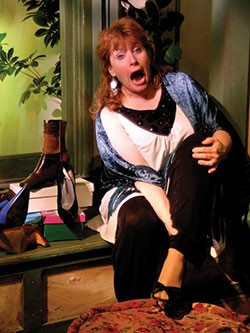 We’ve all had at least one: a bad date.

“You get your hopes up and you think, This is it, he’s the one, and then you find out … whatever; they’re married, they’re broke, they’re liars, they’re psychopaths.” So says Margo Whitcomb, director of Bad Dates, the one-woman show opening at Montpelier’s Lost Nation Theater this week. The play was written by Theresa Rebeck, a screenwriter for “Law & Order.”

LNT’s producing artistic director Kathleen Keenan plays Haley Walker, the single mother, of a teenager, who’s trying to re-enter the dating scene after a 15-year hiatus. What Haley encounters may be cringe-inducingly familiar to many audience members.

A small-town girl from Texas, Haley finds herself starting a new life in New York City. Vying for her attention are her daughter, her finances and the prospect of new love. Oh, and the Romanian mob, and you’ll have to see the play to find out why.

Haley finds solace in the best thing around — the discount designer shoe store right next door. “Haley has a shoe obsession,” Keenan explains.

She and Whitcomb don’t consider themselves “shoe hounds,” but since beginning work on Bad Dates, they’ve been paying a lot more attention to what other women walk around in. The pair put out a call for local ladies to lend them their “fashion” shoes for the show, and have collected a few hundred.

“You wouldn’t believe what women have in their closets,” Whitcomb exclaims. “Colorful pumps, leopard-skin stretchy boots, bridesmaid shoes. I find myself all excited about shoes.”

“I haven’t screamed so much since working on this show,” Keenan admits, miming opening a box of sexy stilettos.

When asked to recall her favorite pair, Keenan thinks hard. Both women are needed to describe the shoes accurately. Turns out they’re classic pumps in candy-apple red, with “nice architectural detail.”

“You want to lick them,” Whitcomb confides.

The play may sound girly, but Keenan and Whitcomb say there’s something in it for everyone. “There is a little bit of voyeurism to it,” says Whitcomb, “because [the audience] gets to be there with [Haley] as she prepares; you know, to really see what happens behind the scenes before and after a date.”

“You will both walk out appreciating who you’re with,” she says with a grin.